How I Became a Democrat

When not being a Republican isn’t enough. 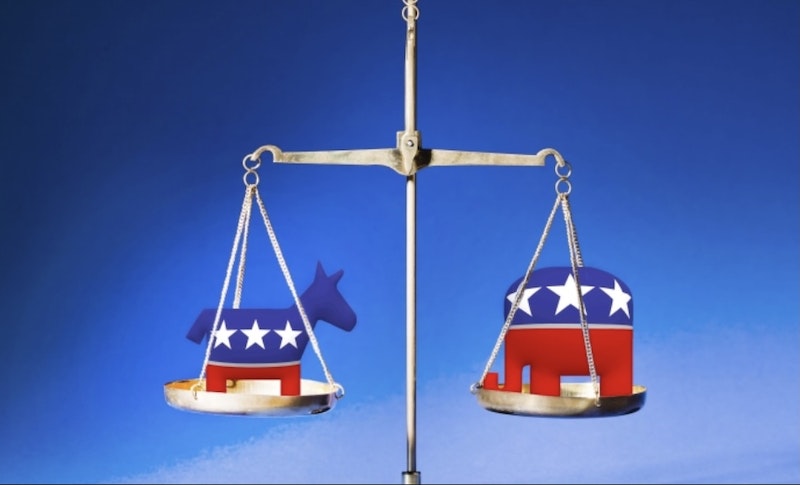 I became a Democrat on the morning after the Capitol riot. I’d been “unaffiliated,” as New Jersey calls independents, since leaving the Republican Party in 2016 after 30-plus. New Jersey allows independents to join a party as late as primary day, a flexibility I’d valued, thinking I might vote in a Republican or Democratic primary now and then. But post-insurrection, there was no way I’d even briefly be a Republican again.

In recent years, I’ve written multiple negative articles about the Republican Party. These have emphasized governance rather than policy. There was no shortage of policy issues—climate, immigration, taxes, trade—where I disagreed with the Trump administration and its congressional allies. But what worried me most were signs of decay in our governing institutions: that long-standing checks and balances were being ignored; that a cult of personality unbefitting a constitutional democracy had taken hold; that the electoral system, the central means of holding power accountable, was coming under attack.

I didn’t anticipate how thorough going the Republican assault on democracy would be. I wrote in October that “Trump Will Leave If He Loses.” I predicted the President wouldn’t concede, and that he’d claim the election had been rigged, but I presumed this would all be face-saving blather, similar to claiming Ted Cruz “stole” the 2016 Iowa caucus and that Trump won the nationwide popular vote that year. For all my hostility to Trump, I underestimated his malevolent determination to overturn the 2020 election; for all my anti-GOP articles, I underestimated the willingness of Republican elected officials to support him in such a goal.

That the election was stolen is a contention that can’t rationally survive the 60-odd court defeats of Trump’s bizarre legal team; the multiple recounts, audits and investigations by state and federal agencies; the disavowal by his own Attorney General; the basic arithmetic of the sizable vote margins across multiple contested states; or the mystery of how the down-ballot races, with many Republican victories, could be legitimate if the ballots were massively fraudulent.

Republican elected officials could’ve taken a clear stand against the phony election-fraud claims. A few did, but many chose either active support for Trump’s lies or a passive silence. That state-level Republicans tried post-election ploys to switch their states’ electoral votes was bad enough; that this effort would be replicated at the federal level, after the Electoral College had sent its certified votes to Congress, is a disgrace that should cling to Ted Cruz, Josh Hawley, other senators who joined them and a majority of the House Republican caucus.

The Trump thugs who swarmed into the Capitol sought to back with force a defilement of the Constitution already underway. They did so at the President’s clear direction. “We are going to try [to] give our Republicans—the weak ones because the strong ones don't need any of our help—we’re going to try and give them the kind of pride and boldness that they need to take back our country,” Trump had exhorted this crowd, an hour before.

After the insurrection, 147 Republican lawmakers, including eight senators, proceeded with their effort to overturn the election. Soon thereafter, the Republican National Committee voted overwhelmingly to re-elect Trump functionaries, while lavishing praise on the President.

This isn’t a party worth trying to reform. Policy matters such as tax rates can be a matter of compromise; basic adherence to the principles of a democratic republic can’t be. Any internal reformers trying to steer the Republican Party away from authoritarianism will face the fact that large numbers of Republican officials and voters have seen Trumpism and embraced it.

The Constitution’s framers didn’t specify any role for political parties, since they were wary of such “factions.” But the system they set up enabled two contending organizations to dominate electoral politics. The health of this system requires that both of the major parties be fundamentally committed to such bedrock values as counting votes and following the law. Since that’s not the case, it’s imperative that one of the parties be replaced by something else.

In the past, I’ve hoped for a new center-right party, and conceivably I might join one if it comes into existence. But I also now look with gratitude at the Democratic Party, as the organization that in recent years has done more than any other to guard against American democracy being destroyed.

My own policy views put me to the right of many in the Democratic Party, though over time that disparity has shrunk. I’m a centrist with free-market tendencies. I favor a carbon tax, because it would aid markets and technologies in addressing climate change. I favor a universal basic income, because it would help people ride out economic downturns and take risks necessary for entrepreneurship. I think we need an immigration policy that’s amenable to people coming here to work, start businesses and pay taxes.

If the Democratic Party were the leftist party caricatured by the right, I wouldn’t join it. Much ferment on the left currently is outside the party, hostile to Democrats as well as Republicans. That the Democrats are dominated by extremists is propaganda propounded by an insular right-wing media ecosystem. I saw conservative columnist Deroy Murdock refer recently to “leftist Joe Biden,” and I remembered Murdock’s columns aren’t worth reading.

As a Democrat, I’ll do my small part to promote policies I think make sense, in a party that’s shown a fundamental adherence to the principles of a constitutional democratic republic. As regards the Republican Party, it’s goodbye forever.