Lessons from The Decline and Fall of the Roman Empire. 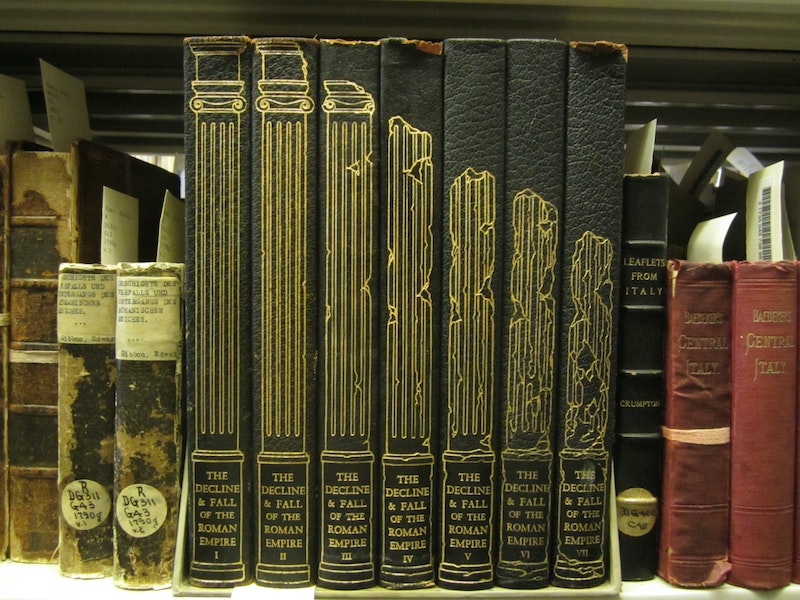 We’re at a pivotal moment in American government. The Trump administration is defying Congressional subpoenas, blocking witnesses from testifying, diverting appropriated funds and claiming that the president is immune from investigation as well as prosecution. The news brings daily evidence of Trump’s push to free himself from checks and balances and place himself above the law.

For perspective, I reached for my copy of Edward Gibbon’s Decline and Fall of the Roman Empire. A book nearly two-and-a-half centuries old, discussing events from some two millennia ago, carries considerable relevance for understanding our current events. In particular, I recommend Chapter Three, focused on the constitution of the Roman Empire as set up by Augustus and followed by his successors.

Gibbon describes how the Roman Senate, which had wielded broad powers during the centuries of the Roman Republic, became a feeble body subservient to the emperor. Augustus and many of his successors maintained a pretense that power was still shared, that the holder of executive power was merely first among equals. In practice, though, the legislators had no capacity to conduct oversight or alter policy against the emperor’s wishes.

Rome became, in effect, a monarchy, even though it was not called that. “The obvious definition of a monarchy,” Gibbon writes, “seems to be that of a state in which a single person, by whatsoever name he may be distinguished, is entrusted with the execution of the law, the management of the revenue, and the command of the army.” Bear in mind in reading this that Trump diverted funds from the Pentagon for his border wall, and that his call with Ukraine occurred after he unilaterally suspended aid Congress had appropriated for that country.

Once the legislature lost its powers, Gibbon observes, it never got them back. He notes that the Roman Senate once “made an ineffectual attempt to reassume its long-forgotten rights. When the throne was vacant by the murder of Caligula, the consuls convoked that assembly in the Capitol, condemned the memory of the Caesars, gave the watchword liberty to the few cohorts who faintly adhered to their standard, and during eight and forty hours acted as the independent chiefs of a free commonwealth.” Then the Praetorian Guards came and installed the next emperor (“the stupid Claudius,” as Gibbon describes him).

Over time, the legislators and the broader public lost any sense of being participants in a republican system of government. Gibbon points out that some of Rome’s more benevolent rulers, such as Hadrian and Marcus Aurelius, “deserved the honour of restoring the republic, had the Romans of their days been capable of enjoying a rational freedom.” The empire thrived at times but suffered from “the instability of a happiness which depended on the character of a single man.” Sooner or later, tyrants such as Caligula and Commodus ascended the throne.

The travails of Rome were much on the mind of America’s founding fathers when they created a republican system of government with checks and balances, separation of powers, and guarantees of rights. That ancient history should be on our minds, too, as our system comes under assault from a man who’s never shown the slightest interest in preserving a republic.