Rules by Which We Live

Prepare for a political legitimacy showdown. 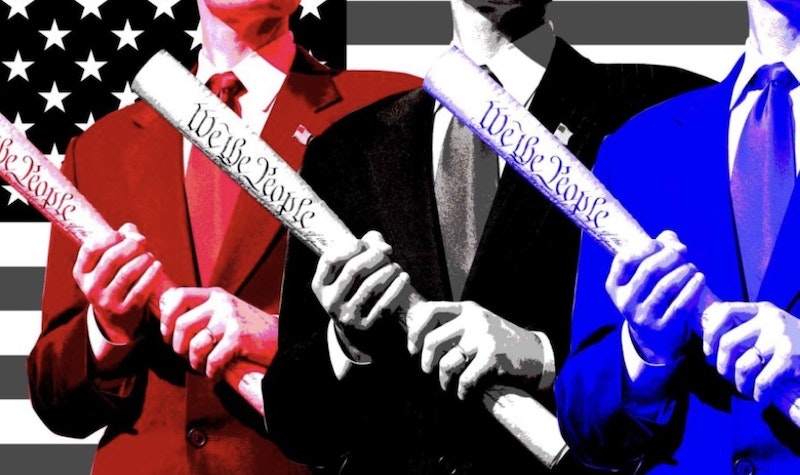 Early in Michael Cohen’s book Disloyal: The True Story of the Former Personal Attorney to President Donald J. Trump, he describes a 2006 condo board meeting at Trump World Tower. The board had turned against Trump and was pushing for his name to be removed from the Manhattan building. As Cohen tells it, a key to Trump’s victory in this meeting was that he brought a formidable bodyguard crew that established dominance by brushing aside the board’s weaker security team.

Cohen, an apartment-owner in the building who’d signed on to help Trump make his case against the board, was delighted by this power play, and the episode marked the start of the sleazy lawyer’s decade-plus stint in Trump’s orbit. Having just published a critical article about anarcho-capitalism, the anecdote provided me a glimpse of how such a system would operate, with property rights providing a thin veneer for rule by intimidation and force.

On a related point, it’s odd to think that a post-government society in which national and state boundaries have been discarded as arbitrary social constructs wouldn’t find private property lines similarly imaginary. But those considerations can await an improbable future in which they take on practical importance, as more pressing political issues are now at hand.

The United States appears to be heading toward a crisis of political legitimacy. A presidential election in which the incumbent has predicted that the outcome will be fraudulent, coupled with contention over the Supreme Court vacancy left by Ruth Bader Ginsburg’s death, opens a vista of uncertainty and conflict regarding not only the outcomes but the processes and rules by which they’re reached; about how the government works, or doesn’t, and who gets to decide.

Human institutions, public or private, are shaped by formal and informal factors. The rules may say one thing while a sufficiently determined participant might say another, and even precisely specified formal processes still have loopholes and ambiguities. A lesson of the Trump era is that more political norms should be written into law, rather than left to the discretion of a chief executive presumed to be adherent to an oath of office.

In 1947, the logician and mathematician Kurt Gödel attended a hearing in New Jersey on his application for U.S. citizenship, accompanied by his friends and character witnesses Albert Einstein and economist Oskar Morgenstern. Gödel told them he’d found a logical flaw in the Constitution that would enable the U.S. to be converted legally into a dictatorship; Einstein and Morgenstern pressed him not to say this to the judge at the hearing.

However, when the judge, Phillip Forman, expressed gratitude that the U.S. was not a dictatorship, Gödel began explaining that there was a way this could happen. Forman, a friend of Einstein who’d administered the oath of citizenship to the physicist, waved this objection aside, and so Gödel’s constitutional problem was never identified. There has been speculation, given Gödel’s logical focus on self-reference, that his concern had to do with Article V, which specifies how the Constitution can be amended; the logician may have worried the document might be amended to make it easier to amend, opening the way for undemocratic changes.

Article V provided a couple of exclusions to the amendment power. One, terribly, stipulated in effect that no amendment could ban the slave trade until 1808. The other, which is generally understood to have no expiration date, requires “that no state, without its consent, shall be deprived of its equal suffrage in the Senate.” Thus, to change the Senate so as to allow larger states to have more senators would require unanimous approval by the states, rather than just a supermajority. On the other hand, Article V itself could be amended.

By contrast, the number of justices on the Supreme Court is not specified in the Constitution, and so could be changed by ordinary legislation without a constitutional amendment. That a post-election Democratic Congress might raise the number from nine to 11 has taken on new plausibility in response to the prospect the current Republican Senate will seat a new justice notwithstanding the proximity of the election and previous assurances not to do so.

That a dispute about the presidential election might be deadlocked by a 4-4 vote in a Supreme Court with a vacancy, or settled by a 5-4 vote in a court that includes a new Trump appointee, are both prospects that could lead to an undermining of popular support for the legitimacy of the decision, and of the court and the election process more broadly. The Electoral College, if it produces an outcome not correlated with the popular vote for the third time since 2000, can also be expected to intensify as a flashpoint.

After a career of bending and breaking rules to his preferences, from condo board meetings to the Oval Office, Trump might be tempted to try to reshape socially constructed elements of reality on an unprecedented scale. Then again, he also has a history of ditching failed endeavors faster than the spin of an Atlantic City roulette wheel.