The establishment gets really bent out of shape. 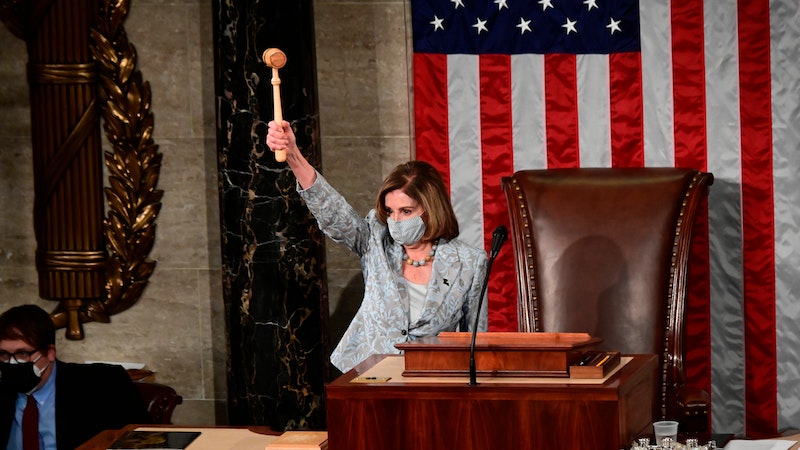 “We’re going to walk down. Any way you want, but I think right here, we’re going to walk down to the Capitol, and we’re going to cheer on our brave senators and congressmen and women—and we’re probably not going to be cheering so much for some of them because you’ll never take back our country with weakness. You have to show strength and you have to be strong. We have come to demand that Congress do the right thing and only count the electors who have been lawfully slated, lawfully slated. I know that everyone here will soon be marching over to the Capitol building to peacefully and patriotically make your voices heard.”

And with those historic, gently-delivered words Wednesday before a then well-behaved crowd, President Donald Trump was banished from all major social media—making it just a bit harder for curious people to confirm later how peaceful his words were. Then, when some of his ralliers in Washington shoved past security guards at the Capitol and countless more were politely ushered in, he was roundly condemned by both major U.S. political parties and turned into a figure of “insurrection” and global anti-democratic upheaval by frightened press the world over, or so we’re told.

Get a grip, humanity. Don’t expect me to believe that the same establishment that watched placidly while America burned in leftist riots during much of 2020 is now terrified of a short-lived, largely spontaneous incursion into a government building—accomplishing little more than rowdy tourism despite two tragic deaths, both of them Trump supporters, one a protestor (and military veteran) needlessly shot in the head point-blank by Capitol police, one a cop resisting the incursion (a reminder of the broad range of Trump’s support)—unless you want to count three more Trump supporters who died of heart attacks and the like in the vast crowd over the course of the day.

The way conservative officials so quickly joined forces with the left afterwards to express shock and outrage was sad (establishment figure House Minority Leader Kevin McCarthy and quasi-libertarian rebel Sen. Rand Paul both called the incursion “un-American”), but the conservatives’ dismay befits their uptight philosophy, after all. Violent mobs are bad (though traditional in American politics—again: see 2020), but also bad, conservatives should be reminded, is profoundly statist talk of government’s “sacred chambers” and our rulers’ “hallowed halls.”

Kneel down and worship while you’re at it, why don’t you? Conservatives are good at that, and when their eyes get misty enough from worshipping, they have difficulty telling whether the hazy figure before them is God or just, say, Sen. Mitt Romney (both entities largely imaginary). That’s the way some of the theocrats and statists alike want it, too. Any road to submission.

They will claim they’re just reacting with fear to the threat Trump poses. But saying, as some have, that Trump et al deliberately “killed five souls” last week, including the one shot in the head by Capitol police, is almost as hyperbolic and inflammatory as saying I killed two people by attending the Woodstock ’94 concert, since two people died over the course of that long, crowded weekend (one of complications from diabetes, the other from a spleen rupture). America has more to fear from that kind of hysteria and escalating rhetoric than from Trump. (What’s next, innumerate idiots claiming all 360,000 or so COVID deaths in the U.S. are on Trump’s head, as if the number could have been zero?)

Being horrified by violence is good, but selective deployment of that reaction is itself highly dangerous. Remember the jailing, fining, SWAT-raiding, bombing, and the like that happen every single day at the hands of government because of the power-wielding goons who sit in those invaded congressional chambers, now shocked that anyone might want to show up and voice disapproval of them. Not that protests invading the halls of Congress is a new or rare phenomenon, but people like to pretend as much this month, in order to maintain outrage levels.

Instead of pretending a few bison-horned and red-hatted Trumpers invented violence last week, please overcome the usual amnesia and condemn the varied forms of violence beloved by socialists, liberals, conservatives, right-wing mobs, most anarchists, and common criminals alike, among others. It’s all destructive. Too much time is wasted trying to sanctify some select forms of that violence by garbing them in complex and verbose layers of legislation that obscure the violence inherent in the system, making a fake virtue of its addled and compliant victims’ mental exhaustion. The Capitol incursion wasn’t pretty, but the Department of Energy, for example, isn’t a peaceful institution, either.

And despite government’s constant coercion of the general populace, and politicians’ assumption we’ll all passively accept it, grandstanders such as Speaker of the House Pelosi now pretend Trump can’t be trusted with the nuclear codes for even one more day, talking of impeaching him again with but a week left before he leaves office anyway, as if they really believe the next logical step after questioning some election results is annihilating the human race in nuclear fire.

The Associated Press reports Pelosi has told Democrats that she has conferred with top military officials and gotten their assurance measures are in place to prevent Trump launching nukes. By the panicky standards currently in place for judging political actions, how is this not an attempt by Pelosi to foment a military coup? Where is the outrage?

But Pelosi’s misplaced (and obviously theatrical) fear about the nukes—as if she and Congress are less warlike than Trump—is telling about the sick, homicidal fantasies of the establishment. Mass death is the kind of thing they imagine themselves doing with power, so it’s all they can imagine anyone else doing. Recall that Trump didn’t even take on added, extra-constitutional powers when a COVID-panicked establishment begged him to do so, with even liberals saying it was time for health-enhancing martial law. He could’ve declared a rigid national industrial policy or mandated a household vitamin regimen and everyone from the WHO to CNN probably would’ve cheered. Yet he didn’t.

For all his egomania, maybe he’s not the crazy one who wants to control every detail of our lives.

The biggest insanity in Washington right now—the most destabilizing impulse in American politics—is the laughable last-minute rush to remove a nearly-departed Trump through the invoking of the 25th Amendment, which provides for the removal of mentally incapacitated presidents. Rep. Debbie Wasserman Schultz claiming via Twitter (where Trump cannot respond) that “America cannot afford 1 more day with Trump in power. He’s a danger to our democracy and American lives” is absurd (yet an idea echoed by the editorial boards of both The Washington Post and Wall Street Journal, among others). These establishment figures are inspiring each other to a mad lather more severe than most of what was seen in the banner-waving of the Capitol incursion crowd.

By denouncing the likes of the incursion rabble, members of Congress are really speaking truth to weakness, as bullies do. If Trump were truly corrupt and in love with power gained on the sly, he probably wouldn’t be spending his final weeks arguing about election tallies or boosting his popularity in irrelevant, mostly non-governmental quarters of the populace but would be doing what most establishment politicians do at this point in their political sojourns: focusing on lining up his seat on the board of Raytheon or some such governmental-adjacent corporate monstrosity, the way William Kristol’s friends do if they want to syphon money or plan wars.

Yet we’re expected to believe that true moral rectitude is now to be found in the people who are suddenly resigning from the Trump administration, after four years—a few rowdies more alarming to them than their four preceding years of wielding power. In truth, last-minute resignations at this point are about as brave as taking a sick day to pad your four-day corporate vacation (or to give yourself more time to select furniture for your new Raytheon office). If you really want to do something brave, stop the federal government from becoming a target again—or ever again being run by a president you dislike—by disbanding it.