The Dangerous Aftermath of the Cosplay Rebellion 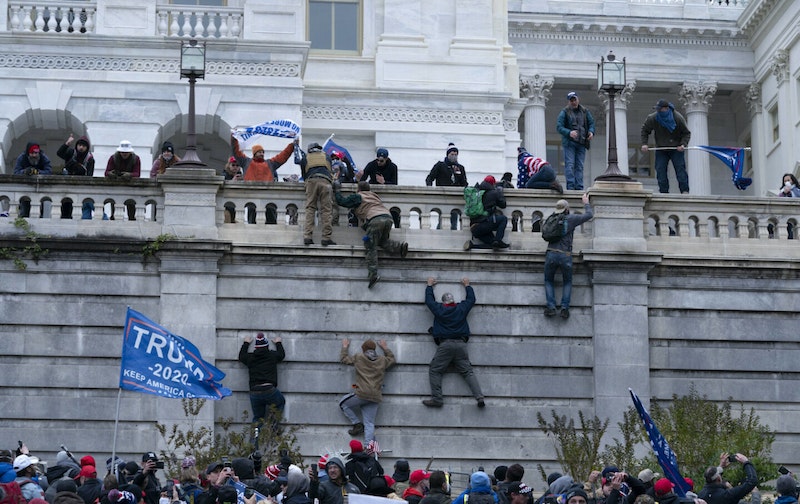 The deluded cosplayers who entered the U.S. Capitol as Senators met to certify the Electoral Eollege votes on Wednesday have been labelled “insurrectionists” and “domestic terrorists” by people who rightly wonder how a group of white agitators could gain access to a secure federal government building while, just this past summer, Black Lives Matter protestors in Portland, Oregon, were attacked by police using military force and tactics outside of the Mark O. Hatfield United States courthouse.

For those of us who believe that “Defund the Police,” is the right course of action, it’s important to frame this question in the right way. We need to prevent the police, nationwide, from subjecting protesting citizens to excessive force, no matter their race or ideology. With careless language, we’re inviting the police and National Guard units to subject citizens to continued, unconscionable brutality. The problem is not that Capitol Police went too easy on the extremists who stood no chance of actually disrupting the election, but that police and federal officers have been far too violent against other demonstrators around the country for decades.

It’s dangerous to give the government license to defend itself with violence, the same way we’ve learned, watching decades of police brutality, that calling 911 can result in a response out of proportion to the offense being reported. When it comes to these costumed goofs who briefly won the run of the Capitol it’s better to wish for better citizens than sterner police and harsher consequences.

Authoritarian-leaning politicians and their milquetoast enablers are eager to expand police power over this. It’s evident in how quickly they reverted to the use of the term “mob,” as if they belonged to the more aristocratic era of Enlightenment political thought—one that we’ve long since abandoned for more direct democracy and populism.

Our mechanisms for controlling public protest, devised in the civil rights and anti-war movements of the 1960s and honed during the anti-globalization protests of the 1990s are all about allowing the technicality of free speech while barring the inconvenience of those who most need to hear what’s said. These tactics include permit requirements, pens and free speech zones set out of eye or earshot of the venue where the targets of the protest have gathered. Then there are curfews. There are mass arrests, leaving judges and prosecutors to sort out troublemakers days or weeks later. A protester is shoved or hit by a police officer and an instinctual response to flee, or to block, or to shove back turns into a charge of “resisting arrest.” Riot shields and batons are used against unarmed people. Groups of police swarm and overwhelm individuals. Rubber bullets are used. Tasers acceptable. Tear gas and pepper spray have been widely abused against protesters without consequence.

Anybody who takes “Defund the Police” seriously should demand the banishment of military tactics and weapons used against U.S. citizens in any circumstance. We should also resist the temptation of using widely available modern technology to round up and punish people. The Capitol protests were well-documented with the faces of protesters instantly available online. They could be easily fed into facial recognition systems to produce reliable identifications of all involved so that warrants could be issued. It  would work and some justice would be served,, but it would also be the largest coordinated expansion of the surveillance state since the post-9/11 data monitoring and collection programs. Arresting these troublemakers is not worth everybody else’s liberties.

Remember, any police, security or intelligence methods used to prevent future right wing outbursts or to enact retribution against the Capitol rioters will inevitably be used against activists from all walks of political and social life. It’s very easy for a system that seeks to perpetuate its power to balance enforcement disparities between communities by hammering everyone, rather than lightening up on everyone.

“Defunding the Police,” will be effective only if its adherents accept that it sometimes means that people will get away with crimes. I’m fine with that. Let the loose cigarette be sold if the cost of enforcement is another’s life. Let the Senate be inconvenienced and let the federal courthouse be marred, if the alternative is war in the streets.