The Man in the High Office

The things a president does, and can get away with, are open to revision. 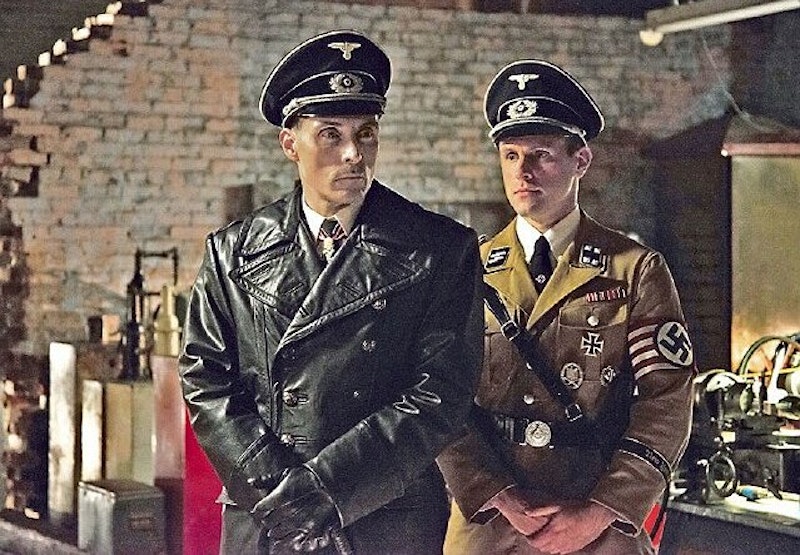 The TV series The Man in the High Castle, which has been viewed into season two in my household, portrays an alternative 1960s America that in the aftermath of losing World War II is divided between an eastern region under the Greater Nazi Reich and a western one under Imperial Japan. This conquered land is a place of fear and oppression, but after nuclear attack, invasion and slaughter, a certain normalcy has resumed. Despite pockets of resistance and mysterious films that offer glimpses of what could be, most Americans accept their subjugation.

The Man in the High Castle is fiction with a prominent element of the surreal, but an America that’s learned to live without a functioning democracy is all too plausible. It’s easy to imagine a Lindsey Graham or Hugh Hewitt serving as a toadying functionary of an authoritarian regime, as that’s a role for which they already seem to be auditioning. It’s easy to imagine a nation with an autocratic presidency that has neutered congressional oversight and other checks and balances, because that’s exactly what Donald Trump is trying to achieve.

Unmaking the Presidency: Donald Trump’s War on the World’s Most Powerful Office, by Susan Hennessey and Benjamin Wittes (Farrar, Straus and Giroux), sketches out the changes that Trump’s making, or seeking to make, to that institution. The authors, both at the Brookings Institution and respectively executive editor and editor in chief of the blog Lawfare, see Trump as making a “proposal” to alter the presidency, such that “the institutional office and the personality of its occupant are almost entirely merged—merged in their interests, in their impulses, in their finances, and in their public character.”

They elaborate: “In elevating the expressive, vanity-plate dimensions of the office and making it a personal vehicle for the public self-expression of the officeholder, he proposes sublimating nearly all other traditional features of the presidency: its management functions; its expectation of good-faith execution of law; its expectation of ethical conduct, truthfulness, and service.”

The presidency has changed in the past, Hennessey and Wittes note, for example when Theodore Roosevelt and Woodrow Wilson expanded its direct communication with the public. If Trump is re-elected, the authors argue, his alterations of how a president operates, and of what the public expects and accepts from one, are likely to be lasting.

Hennessey and Wittes catalog various ways in which this presidency marks a departure: that Trump makes little pretense of embodying civic virtue and taking seriously his oath of office; that he makes policy decisions without significant analysis or consultation, while also allowing considerable disunity among parts of his administration; that he has avoided real separation of his official activity from his business interests; that he claims sweeping rights to block actions by law enforcement or Congress, including investigations of himself; that he has little regard for longstanding alliances and foreign-policy commitments; and that he’s aggressive in deploying what the authors call “the kingly powers,” that is, unhindered capabilities such as the pardon power or control of security clearances.

Unmaking the Presidency is a cogent analysis that’s no less disturbing for being written in a sober and restrained style. The book might’ve been more alarming yet were it not for the quirk of timing that it went to press in October at an early stage of the impeachment process, when the Ukraine matter was just coming into focus and obstruction of the inquiry had just begun. Hennessey and Wittes could only sketch out the emerging scandal in a postscript, while expressing hope it might provide “a shock to the constitutional system—a shock that may at last jolt it into functioning as the founders imagined it would.”

Given how my wife and I are watching The Man in the High Castle, there’s a chance we’ll have seen all four seasons before the Senate’s trial of Trump comes to an end. As I’ve written, I don’t expect much deliberation from the Senate; I hold out more hope that the voters will say no to the encroachment of authoritarianism. But the possible futures of America’s presidency and democracy are things of which we all now can catch only glimpses, in a darkened room.