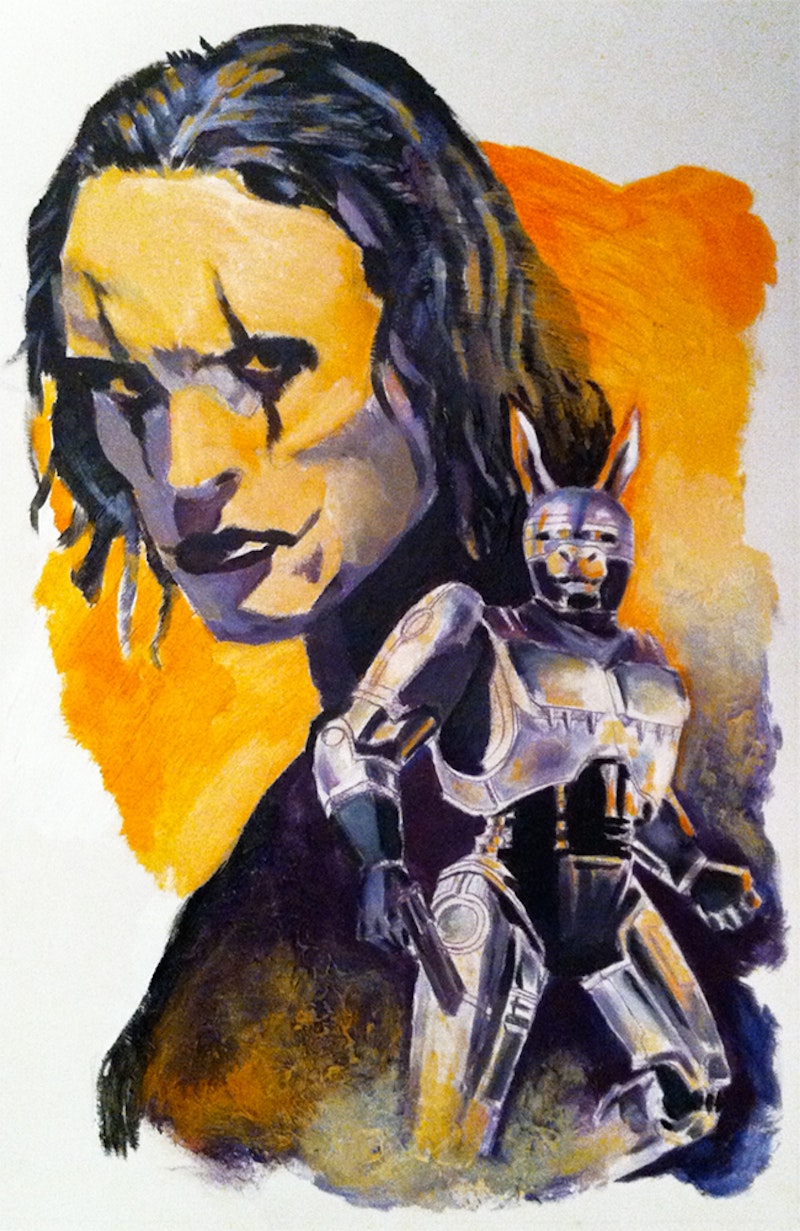 The Ass was the craziest band to come out of upstate New York in the 90s, yet until now you've probably never heard of them, or any of the twisted visual art and writing created by The Ass' frontman Ryan Klemek. The Ass' work occupies a hallowed place in the realm of crucial DIY weirdness, a conceptual landscape that continues to expand today through Klemek's amazing and hilarious contributions to the Skull Island Times website, the bonkers erotica he writes under the alias R.K. Galaga, the wacked out t-shirts he designed for Donkeyshines, and the strange yet realistic paintings he creates featuring godzilla, old school pro-wrestlers, and sexually uninhibited dinosaurs.

Klemek's early recordings with The Ass were a startling combination of jazz, classical music, performance art, dark shock value humor, and joyous nonsense. With his high school chums Paul Hagin and Nate (who asked that his last name be witheld here), Klemek unleashed a complex absurdist attack. While they were never indie rock scenesters, The Ass' crazed hubris was similar to that of obtuse 90s artists like Ween, Thinking Fellars Union Local 282, and The Tinklers. Their work was an imaginative sonic manifesto for nerdy sarcastic weirdos bored by the conformity of rock music, but madly in love with the genre's brash theatrics.

The Ass formed in 1994 in Latham, NY, a suburb just outside of Albany which Klemek has described as "typically conservative" and "not very diverse." The trio never played a gig, but they did manage to self-release two extremely lo-fi records. The first, a self-titled tape which came out in the mid 90s, featured suitably bizarre cover art by Klemek that served as the perfect visual comment on the group's music (a photo of the original painting used for the cover art appears above, sans text). Their second record came out shortly after that. The sophmore Ass album was titled The Best and the Worst of the Ass. This was a CD-R version of their first record augmented by previously unreleased bonus tracks recorded around the same time. The Ass never sold their records; instead the band members jointly made around 10-20 copies of each release and gave them to their friends, including some students at Boston's School of the Museum of Fine Arts, which Klemek attended in the 90s.

Some of The Ass' material could befuddle, offend, and annoy even the more adventurous fans of outsider music. They never tried to emulate any kind of established anti-mainstream or underground aesthetic. Klemek and the boys dumped all their influences into a conceptual blender and cranked that thing up to ten thousand resulting in a chaotic brew of sounds and atmospheres that remains wildly original even when compared to any of today's many self-consciously genre-bending musicians.

Some highlights of their recordings:

"Flute Murderer" is an instrumental track that almost completely betrays its ominous name with a sublime, melodic grandeur that's both mystical and romantic, despite the lonesome background noise of someone sloppily tapping on a snare drum and hi-hat cymbal in what might be the silliest ADD imitation of jazz drumming ever recorded.

"We Dont Wipe" is as close to playing it straight as the group ever got. A bonus track from The Best and the Worst..., this tune is a scatological romp set to the melody of Twisted Sister's hard rock classic "We're Not Gonna Take It." In the bizarro world of The Ass, of course, the famous hook's lyrics have been changed to, "We don't wipe our assholes!/No! We dont wipe out assholes!" as the crew marries the best elements of Klemek's main pop influence Weird Al Yankovic with a cacophonous percussion section and devil-may-care approach to music theory that brings to mind pre-WW2 jug band music or teen outsider rock obscurities like The Movement's "Stinking Peanut Butter Love" or "Scream Mother Scream" by Sur Royal Da Count.

"Not Affraid" is one of a handful of their rap songs and, needless to say, it sounds absolutely nothing like any other rap music that's come before or since. The hilarious nasal teen MC's Klemek and Hagin balance cold nihlism with one liners in a steady stream of absurdly violent brags that are about as dangerous as a water gun wielding toddler. The instrumentation (a stand-up bass/drums/xylophone/vocals combo) further adds to the aggro harmlessness. The xylophone lines in particular give this track a surprising dash of psychedelic whimsy.

"Jimmy Died in a Bowling Alley" is in many ways a signal of things to come. Two maniacal vocalists, a lone bass guitar, and some brief moody trumpet lines combine in complex, angular melodies and arrangements with silly narrative lyrics that reflect Klemek's interest in the contrast of dark fantasy and the mundane. This juxtaposition would return time and time again as a major component of the artist's more recent non-musical work, but here it emerges in a teenage miracle of sonic power that's awkward and graceful all at once.