Our civic responsibility takes many forms. 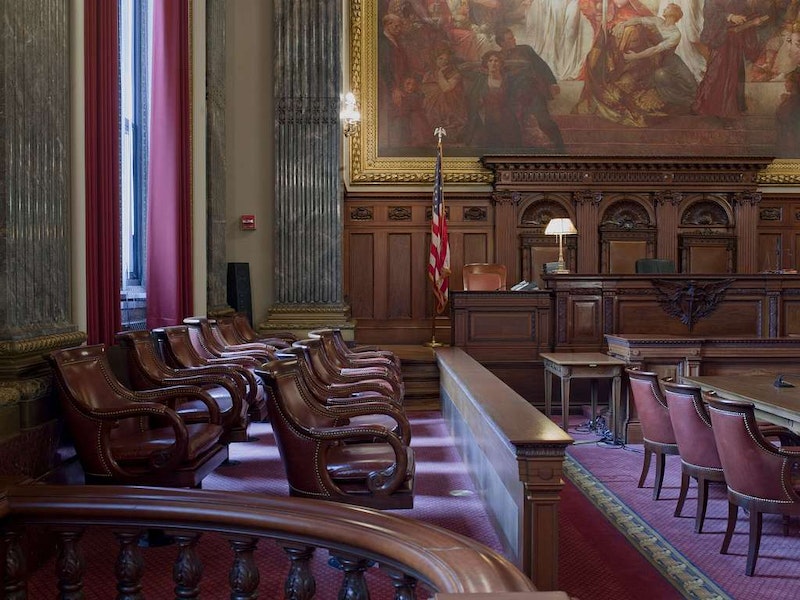 The likelihood that Donald Trump will be impeached, resulting in a trial in the Senate with senators serving as jurors, put me in mind of my own jury duty experiences over the years.

I was a juror three times in New York City. The first trial was for armed robbery. The mugger wasn’t armed—may have had a banana in his pocket—but he claimed to be armed, and that sufficed for a guilty verdict. The last trial was of two men for assaulting a man. Neither the defendants nor the victim seemed to tell the full story of what happened; probably a drug deal gone wrong. But they’d clearly committed assault. The young prosecutor glared at us when we asked for more information before deciding on a verdict. When we declared them guilty, one of the defendants put his head on the desk, sobbing loudly as the judge dismissed us.

The trial in between was a federal civil case. This was in the late-1990s. One of the big art auction houses was suing a wealthy collector, who happened to be a noted cancer scientist, and he was countersuing them. He’d engaged them to auction his collection of Old Master paintings and drawings earlier in the decade, and the auction had gone poorly. The auction house was suing to get back money they’d advanced him; his countersuit was that they’d mismanaged the auction, so he wanted the debt to be canceled and to get damages.

To get on this jury, you were supposed to be broadly ignorant of the art world. I surely would’ve been excluded if I’d told the vetting lawyers of my lunches at the Met with a friend who curated Italian Renaissance paintings. But they were asking if people had knowledge of “Old Master” art, and I wrongly thought that term basically meant Dutch art. The case turned out to be about an Italian Renaissance collection, but I can’t say I had any knowledge that got in the way; and despite being a freelancer with an irregular income, I wasn’t one to try to get out of jury duty.

The case went on for several weeks and bombarded us with information about the art market, how the auction houses work, valuations, provenance, etc. We pored over art catalogs and listened to testimony, including from art historian expert witnesses. The judge, Denny Chin, was quick-witted and adept at keeping things orderly and comprehensible. His instructions put a lot of responsibility on us jurors to figure out not just who was to blame but also how much money was at stake. We had leeway in choosing how to value the art and assess any damages.

As the jury deliberated, it became clear that some of us (including me) were more sympathetic to the auction house, others leaning more to the collector. But we all agreed both sides bore a share of blame: the auction house did a weak job of assessing his collection and marketing it; he’d given them mediocre info, and was a sophisticated collector now pretending to be naive. Moreover, the auction’s disappointing results owed much to forces beyond either side’s control, as the art market had taken a plunge in the early-1990s.

There was a curious moment as we returned to the courtroom to give our verdict. Up until then, we’d always risen with everyone else as the judge walked in. Now, the courtroom rose for us, with the judge slipping in afterwards. It appeared to be a formal recognition that at that moment the power was in our hands.

I’ve always had a good feeling about Judge Chin, a smart, amiable man who held a sociable discussion with the jurors and lawyers afterwards about what had happened. Some years later he was the judge on the Bernie Madoff trial. Recently, the judge was in the news again, questioning one of Donald Trump’s lawyers on the claim that even a 5th Ave. shooting by the incumbent president could not be prosecuted or investigated.

I don’t have much confidence in the Senate to provide a well-deliberated solution. It doesn’t seem that any amount of evidence of abuse of presidential power will result in 20 Republican senators voting for Trump’s removal. The wild card is that people who evaded testifying in the House—such as John Bolton, Mike Pompeo and Rudy Giuliani—might be compelled to testify in the Senate. Even that, though, seems unlikely to change party-line minds.

Thus, the ultimate jury, as far as removal of the president goes, will be us, the voters. Even amid the fog of ongoing disinformation and abuses, we will have the power to deliver a verdict. My guess is we’ll find Trump as fake as any banana-toting robber, and as guilty.