Happy-Go-Lucky is the Film of the Year

And The Dark Knight was the most overrated. 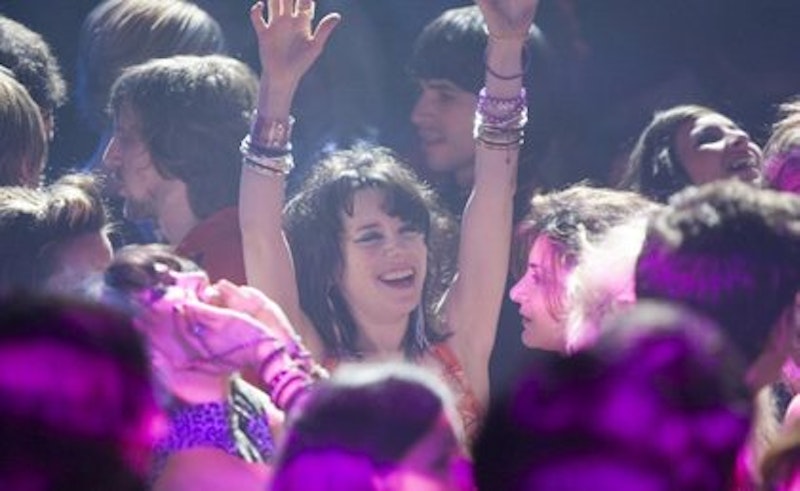 First things first: I’d like to use this year-end wrap-up to right a wrong. I tried to write about all the movies I saw this year, but for some reason never found the time to cover one that I really enjoyed, the basketball documentary Gunnin' for that #1 Spot. Directed by the Beastie Boys’ Adam Yauch, Gunnin’ follows eight high school athletes as they prepare for and participate in the “Elite 24” tournament at Harlem’s famed Rucker Park outdoor court.

Gunnin’ for That #1 Spot is an illuminating look at the pressures that young athletes of this skill level endure, the business that circles buzzard-like around them, and the unifying power of sports in general—these young men that come from varied backgrounds and regions, yet the outcome of this high-pressure game is respect and camaraderie, not jealousy or competition. But it’s also an incredibly fun film, directed with great style by Yauch and set to an appropriate soundtrack of vintage hip-hop and funk that perfectly complements another overlooked 2008 title, The Wackness. Gunnin’ implicitly condemns modern basketball culture’s focus on sneaker deals and young scouting, but the point is made best by Yauch’s ABA-style montages, bulging fisheye photography and slow motion, and his intimate capture of street-ball verbal games. The film cuts right through NBA self-importance and reminds us why sports are so popular to begin with: they foster community.

I’ll bypass the Top 10 lists; suffice to say that the movies I consider must-sees for one reason or another were Rachel Getting Married, Cadillac Records, Burn After Reading, Man on Wire, The Wrestler, Revolutionary Road and Standard Operating Procedure. All of these movies share a sense of optimistic urgency, which is not to say that they’re all happy movies. But in each we see communities of people interacting with one another in complicated, perseverant ways. There’s no room for pity in any of these films even when they seem helpless; the filmmakers are too honest for that. Whether melodramatic (Rachel Getting Married), farcical (Burn After Reading), inspiring (Man on Wire, Cadillac Records), or enraging (Standard Operating Procedure), these movies all honor emotional depth, and, like Gunnin’ For That #1 spot, they feel like honest explorations of communities. And not coincidentally, many of them are anchored by fantastic music.

My pick for film of the year, Mike Leigh’s Happy-Go-Lucky, does all of these things, too, but I’ll get to that in a minute. First, some honorable mentions from the dregs:

Best Performance in a Bad Movie: Tim Roth conveys an incredible amount of sadness and distress while remaining mostly silent and chair-bound for the duration of Funny Games, Michael Haneke’s unfortunate and unnecessary remake of his 1997 Austrian original. Likewise, Emile Hirsch’s performance as Cleve Jones in Gus Van Sant’s otherwise hokey, bumbling Milk. I wrote that Sean Penn’s performance never really explains Harvey Milk beyond the surface-historical depiction we see with greater focus in the 1985 documentary The Times of Harvey Milk, but Hirsch, less burdened by the task of portraying an iconic public figure, gives Jones a fuller personality in many fewer scenes. His transition from self-absorbed youth to vocal human rights advocate feels true every short step of the way. Same for Satish Kaushik as the put-upon husband in Brick Lane, who is the most grounding element of that otherwise featherweight film.

Best Supporting Performance: Michael Shannon simply dominates the short scenes he has in Revolutionary Road. Leonardo DiCaprio is also so good in that film’s looser moments that you wish he took more reckless roles like the schizophrenic, judgmental young man that Shannon plays here. This performance is simultaneously wild and controlled, funny and hateful. The role as written functions as Revolutionary Road’s thematic mile-marker; he appears in order to voice the latent problems in the main characters’ domestic plans. But it’s also the most vibrant, human part of the film thanks to Shannon’s glowing, herky-jerky body language. Olivia Thirlby also owned her romanticized role in The Wackness, and she too was that movie’s most realistic, rich performance. And DiCaprio could take a lesson from fellow leading man George Clooney and try to loosen up as the latter did in Burn After Reading. Clooney’s lustful man-child blurs the difference between acting and hamming through full-bodied enthusiasm.

Most Underrated Movie: It’s insane to me that critics dwelled on the occasional dramatic obviousness of Cadillac Records, particularly in light of recent praise for Ray and Walk the Line, neither of which contain as much music. Perhaps it’s because Cadillac Records never stoops to pretension or actorly grandstanding, and instead captures a musical mood on film. Likewise, it’s unfortunate that 4 Months, 3 Weeks and 2 Days was lauded for its “realism” when it isn’t nearly as honest or fun as Stuck, which at least has the dignity to proclaim its shock-movie intentions proudly. Stuck and Cadillac Records are both too celebratory and unpretentious to find mainstream critical acceptance, but they deserve bigger audiences than they got.

Biggest Disappointment: I loved David Fincher’s previous film, Zodiac, which is why the sweeping-but-bland follow-up, The Curious Case of Benjamin Button, is so disappointing. I’ll review this next week and explain why, but Benjamin is an overstuffed and ineffectual attempt at old-school movie charm, and another perfect example of how critics can somehow fall in love with obvious, melodramatic hokum whenever it’s pretentious and well publicized. And, had it been made 15 years ago, the De Niro/Pacino marquee of Righteous Kill would have felt more insulting atop such a dreadful film; in 2008, it was too expected to really sting.

Biggest Pleasant Surprise: Robert Downey, Jr. is as good as everyone says in Tropic Thunder, but the biggest surprise of that movie is Ben Stiller’s confident direction. Stiller nails the hilarious genre parodies at the movie’s opening, then goes on to ably follow an ensemble cast, convincingly immerse us in his jungle setting, stage huge action scenes, and add a number of visual gags to his own mostly hilarious script. Jeremy Irons, who’s just about the exact opposite style of actor from his costars Ed Harris and Viggo Mortensen, is a suitably wily Western villain in Appaloosa. I kept wishing the movie had more of him.

Most Overrated: Heath Ledger, blah blah blah, but The Dark Knight got worse every time I thought about it. I admired its ambition and (relative) paucity of CGI, but it also combines some of the worst summer-movie excesses with a generous dollop of fall-movie self-seriousness. It’s overlong, narratively garbled (I still can’t get over how the party scene with Rachel and the Joker just ends), far too talky, and unforgivably dark. In its own cultural-touchstone way, The Dark Knight best exemplifies the trend of filmmakers (and moviegoers) confusing thematic bleakness with genuine philosophical insight, an inclination we also saw in the publishing world with the adulatory celebration of 2666. The problem with Batman and Robin wasn’t that it was too goofy; it’s that the Schumacher Batman films were aesthetic disasters. Christopher Nolan corrected that, but also forgot that “serious” doesn’t always equal “grim.”

Which is why Happy-Go-Lucky is the most essential movie of 2008. Beyond having the year’s best lead performance in Sally Hawkins, and the most competent script and direction by Mike Leigh, Happy-Go-Lucky best refutes the trend that The Dark Knight embodies. Here is a movie with actual human insight that doesn’t for one second rely on ineluctable terror or darkness to express it. Leigh’s film isn’t necessarily a happy movie, but it’s about happiness; it questions how people find it and keep it and why some of us can’t do either. This was the most affecting movie I saw all year precisely because it explored the entire human emotional spectrum and had the audacity to imply that happiness is the most appropriate response to life’s problems. It reaches out as compassionately as its protagonist and tries to show us hope instead of just reminding us how bad things can be. I suspect this is why I’ve thought about it nearly every day since seeing it in October

Happy-Go-Lucky combines the communal and familial energy and insight of Rachel Getting Married with small bursts of Burn After Reading’s antic cynicism. It exudes joy and a sense of discovery as well as Cadillac Records and Man on Wire. It is as intimate a character study as The Wrestler and as aesthetically accomplished as Revolutionary Road. It also bursts with meaningful, expressive music like Rachel, Cadillac, and Man on Wire did, but also manages to feel as morally purposeful as Standard Operating Procedure.

The latter film, Errol Morris’ documentary on Abu Ghraib, was perhaps too familiar and partisan to truly have an impact in this culturally contentious year. Happy-Go-Lucky doesn’t go anywhere near politics, yet somehow feels more culturally relevant and important than Morris’ investigation. 2008’s most successful films were either unremittingly dark, like The Dark Knight, or ecstatically goofy like Tropic Thunder. They catered to extremes, in other words, which in and of itself is no crime, but Happy-Go-Lucky better shows what cinema is capable of when made by generous, true artists. It shows, better than any movie I saw all year, that a gifted director, writer and cast can do more than simply hammer an emotionally monotone melody—they can show us the depth of human experience that looms just below our daily routines and preconceptions.