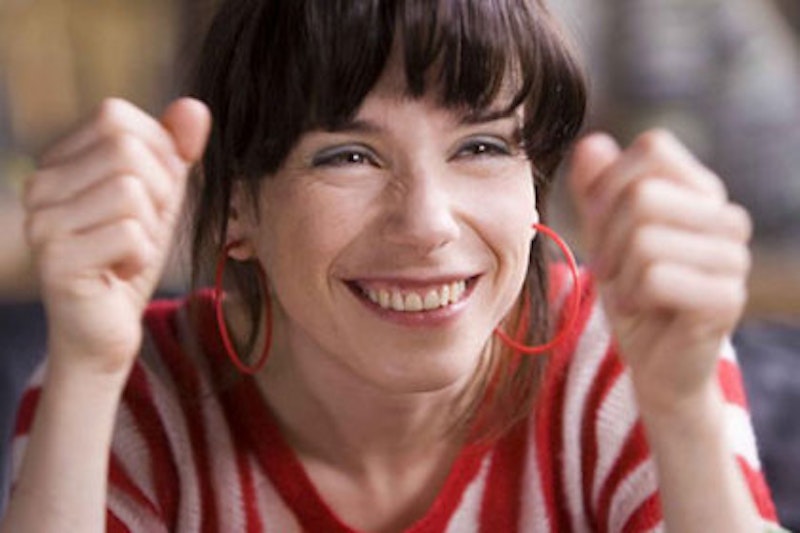 The newest Mike Leigh joint, Happy-Go-Lucky, explores happiness with the same artistic gravity that most movies reserve for sadness. Leigh’s film centers around Poppy, a 30-year-old primary school teacher who floats through life with a bubbly disposition better suited to the jocular sidekick in a Julia Roberts vehicle. But as brought to life by Sally Hawkins’ unbelievable performance and Leigh’s beautiful filmmaking, Poppy achieves a depth of character that movies allow only for tragic figures, especially in fall and winter releases; this is as complex a character and performance as Daniel Day-Lewis’ deservingly ballyhooed There Will Be Blood role last year. No emotion is simple in the hands of artists with Leigh’s talent and compassion, and Happy-Go-Lucky, like the best of his films, achieves a kind of cinematic state of grace. It’s simultaneously “serious” and life affirming, and another triumph for this great filmmaker.

Poppy speeds through London on a bicycle as the credits roll and then enters a bookstore, where the shopkeeper scoffs at her glib attitude. We all know people like Poppy, but the archetype is still mostly foreign in movies; always talking, she’s a woman who annoys because it seems like she doesn’t take anything seriously. Locked in our distinctly unfunny daily routines, as the shopkeeper is, such a sudden burst of personal boundary-defying chatter is grating and obnoxious. And so it is in Happy-Go-Lucky; far from giving us an easy heroine, Leigh presents us with a woman who’s distinctly annoying out of context, then spends the next two hours giving us the background in which to appreciate Poppy’s demeanor as endearing, even brave. It’s the same challenge he issued in his 1993 film Naked, which opens with David Thewlis’ Johnny attempting to rape a woman and then fleeing Manchester for London. In both cases, it’s Leigh’s project to make us see through our initial impressions and appreciate the complexity—if not the goodness—of even the least appealing characters.

Johnny was similarly logorrheic, but his acerbic, hateful intellectualism was a guard against intimacy whereas Poppy constantly reaches outward. Hence her loving, supportive relationship with her students (including a violent one who she counsels outside of class) and a nearly surreal scene where she encounters a mentally ill homeless man and tries to really understand his manic raving. We’re used to viewing people like Poppy as somehow deranged or socially daft, yet she also has a longstanding, loving friendship with her roommate, Zoe (Alexis Zegerman), who is low-key and sarcastic yet clearly values Poppy’s optimism.

After her bike is stolen in the first scene, Poppy starts taking driving lessons with a private instructor (Eddie Marsan, who does a complete 180 from his terminally shy role in Leigh’s 2004 film Vera Drake). That’s essentially the only plot in Happy-Go-Lucky, and the rest of the film follows Poppy as she attends to her day-to-day professional tasks and relationships. It’s a seemingly banal sketch for a movie, but Leigh’s style is perfectly suited to finding epic themes in private moments. His camera, as always, moves in achingly slow zooms, allowing us to feel like we’re leaning in to eavesdrop on intimate conversations. And his use of close-ups—a continued homage to Carl Theodor Dreyer’s 1929 The Passion of Joan of Arc that was made explicit in Vera Drake—gives a similarly grand importance to subtle emotions. Leigh’s movies, Happy-Go-Lucky included, take place in lower- and middle-class London flats and pubs, but they feel much more spacious since, like Dreyer, he lavishes attention on the human face like a western director photographing the desert.

As evidenced by Poppy’s job and her recurring interactions with Scott, the racially intolerant and spiteful driving instructor, Leigh’s film moves cyclically through teacher-student interactions, showing each person’s duality at different times. Scott, despite his rigorously defined tutoring methods, turns out to be as childishly violent as the student that Poppy helps in class. Ditto the hilariously unstable Spanish instructor (Karina Fernandez) that leads her salsa dance lessons. But Tim (Samuel Roukin), the social worker who starts to date Poppy after their initial encounter with the troubled student, is shown to be both an able authority figure and a lovestruck romantic.

Poppy and Tim are ultimately heroic because they embrace both instructive responsibility and neophytic unknowing. Contrast this to Poppy’s suburbanite younger sister who becomes unnecessarily defensive when she feels her lifestyle is being judged. But Poppy instead approaches life with a wide-eyed embrace of its contradictory demands (that we be both teacher and student at different times, for example), a characteristic that Leigh expresses through Poppy’s participation in trampoline classes. Photographed in subtle slow motion while momentarily caught between land and sky, Poppy is a picture of emotional harmony. And when she pulls a muscle in mid-jump and has to have her back adjusted, she laughs giddily as her bones are cracked in the physical therapist's hands.

Early in the film, Poppy goes with Zoe and their friends to a typical dance club and are seen bouncing up and down to Pulp’s “Common People,” which peaks with the lines, “Sing along with the common people/Sing along and it might just get you through/Laugh along with the common people/Laugh along even though they're laughing at you.” I suspect this isn’t an arbitrary musical reference; Happy-Go-Lucky reveals its protagonist’s unflagging optimism isn’t a retreat from life’s difficulties but rather a response to them. Poppy loves life but rarely feels content; she yearns for a boyfriend and worries about her students and family. Her optimism isn’t the simplemindedness that others often take it for, and Happy-Go-Lucky honors her by showing that masterful filmmaking and nuanced acting are perfectly suited to exploring even the most seemingly slight emotions.