Christopher Nolan’s newest versions of the classic character are the most artistically incredible homage yet, but wasn’t Batman once a cartoon? 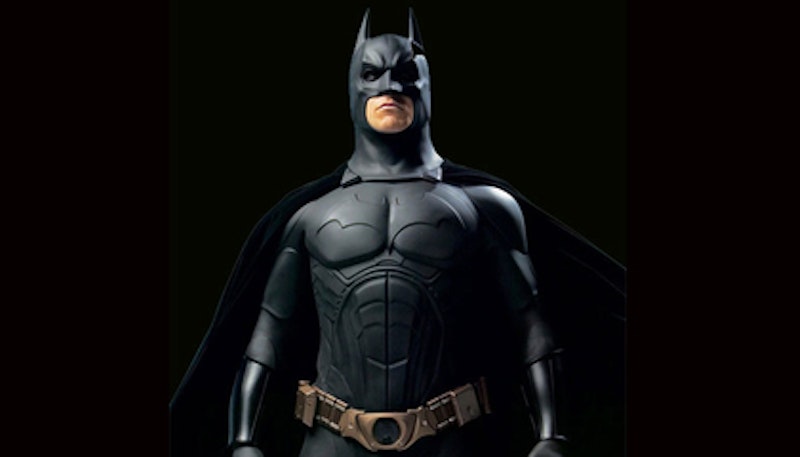 He’s been a second-stringer in Detective Comics, a golden-age comic hero, a campy live-action television star, a vengeful has-been in Frank Miller’s telling, a dark children’s cartoon in an underrated animated series, and a Hollywood product played by four actors in the last 20 years. Batman has been absorbed and recontextualized so often in our culture that perhaps Christopher Nolan’s new vision in 2005’s Batman Begins and The Dark Knight, out now, represents the current reality for Bob Kane’s (and the routinely uncredited Bill Finger’s) creation: here is Batman, shorn of any and all cartoon or comic influence, a pop reality so ingrained that he can now be the hero of a grisly, realistic crime epic.

The Dark Knight succeeds despite Nolan’s occasional but massive directorial blunders. His script, like that for Batman Begins, is still too talky, and he unforgivably leaves the ultimate fate of a major character unseen. At times he resorts to meaningless existential platitudes (“Some men just like to watch the world burn”) instead of letting his characters and camera do the work, and he too often leaves these lines to a nearly stationary Michael Caine. Nolan has enough visual panache and respect for his legendary subject matter that his film overcomes the fact that he’s no real auteur. This is nevertheless grand, ambitious entertainment that, for once, at least aspires to be an actual film and not just a commercial for a McDonald’s tie-in.

Nolan wrote the script with his brother and Memento collaborator Jonathan, and their greatest innovation is their treatment of the Joker, played here, in case you’ve been living under a rock, by Heath Ledger. Doing away with any specific origin story (remember Jack Nicholson falling into a vat of acid?), the Joker now stands as a believably masochistic personification of chaos, evil, and disorder, and the white makeup is now a stylistic choice rather than a bleached-skin cross to bear. Coming after the Gacy killings and Stephen King’s It, such an aesthetic choice even follows a certain kind of cultural logic. The Joker makes claims to an abusive childhood, saying his sadistic father carved the permanent smile with a paring knife, and this helps further the parallels with Batman that were heretofore only implied: now they are both products of childhood trauma, both madmen renegades who think they’re above the law, both costumed freaks with over-the-top methods and presences.

Other than an odd, distracting mafia subplot, there’s surprisingly little story besides a continuing rollout of Joker vs. Batman set pieces, and the story that does exist rests primarily with Harvey Dent (Aaron Eckhart), a young Gotham politician that strikes most decent people, including Bruce Wayne (Christian Bale) as the best hope for the city’s eventual rejuvenation. Dent also happens to be romancing Wayne’s lifelong paramour Rachel Dawes (Maggie Gyllenhaal), but anyone familiar with the Batman legend knows that his heroic, shining days are numbered.

Yes, the young, hopeful—and let’s just say it: Obama-like—politician gets corrupted by Jokeresque murderer madness—and is the Joker anything other than a terrorist?—but I’m confounded by the small yet fervent critical movement to decry Nolan’s Batman franchise as nihilistic or millenarian. These movies are certainly dark, maybe too serious for their own good, but as a third act attempt at a murderous prisoner’s dilemma shows, there’s faith in humanity at the filmmaker’s core. When Dent says early on, “You either die a hero or live long enough to see yourself become a villain,” he’s not acting as The Dark Knight’s moral voice, he’s exposing the vulnerability that allows for his character’s eventual corruption. What else is the Batman myth but the story of a man who seeks to reorient an incurably violent city to prevent others from experiencing the childhood tragedy he endured? The hopelessness that Frank Miller and now Christopher Nolan have gravitated towards isn’t disgust for mankind, it’s the questioning of whether or not a lone, vengeful man can ever achieve such a goal, and equivalently, whether or not he should to begin with.

As such, the Nolan movies are the best-yet cinematic exploration of the Batman story and its attendant moral issues, now nearly 70 years old. But despite their psychological bent and impressive reappropriation of the stock Batman images, there’s something strange about a comic-based franchise that attempts to destroy any and all comic influence in their product. It’s not that the Batman story has ever been a particularly zany one, but Nolan’s treatment occasionally confuses moral inquiry with joylessness. For all the dialogue, there’s little conversation that actually builds the characters, Joker excepted, beyond plot machinations. The relationship between Lieutenant (not yet Commissioner) Gordon and Batman should be a more important one than it is, particularly since Nolan set us up for something bigger during the flashbacks in Batman Begins. Likewise the relationship between Dent and Dawes, which we’re to believe is serious and mature simply because we’re told it is. The aerial shots of Gotham, really Chicago, give The Dark Knight a visual expansiveness that the earlier movie lacked, as do the frequent shots that quickly lower us from high-rises, but Nolan is still no cinematic storyteller. He lacks, ironically, the comic artist’s ability to build characters from the combination of miniaturized visual and spoken language.

Nevertheless, there is something exhilarating about The Dark Knight, more so than even Ledger’s maniacal, unhinged performance; there’s also the fact that Nolan both eschews CGI and actually engages the moral undercurrents of his source material. This is a crime movie above all, and that’s fitting for the only famous superhero devoid of supernatural powers. When a truck upends in downtown Gotham, we’re seeing an actual truck balanced on its nose, and this is a true visual thrill, not just computer-generated soulless effect. Nolan borrows more heavily from film noir than his superhero-movie director contemporaries do or can, and he even seems to have a respect for the body count. The Joker asks a policeman, “How many of your friends have I killed?” and the cop is forced to say, after a quick derisive rebuttal, “You’ve killed six.” The movie’s constant civic terrorism is made personal; an actual number appears in a genre that too often blows away unnamed dozens at once.

The Dark Knight contradicts itself enough that its seeming greatness never quite equals its self-seriousness. It’s a well-done movie by an only modestly talented filmmaker; an action movie that feels too talky; a superhero story that, like Alan Moore’s seminal Watchmen serial, seems to nearly disdain the comic book genre’s inherent glee. But it does more than just conscientiously rewrite the Batman mythos—it expands upon the moral questions raised by such a story in a time of terror, and that’s a useful cultural project. Something about this character still resonates with our popular consciousness, and it’s therefore worthwhile to revisit the most human of superheroes and remind ourselves that his story carries a moral weight that never ages. This isn’t nihilism; it’s pop art of the noblest kind.