A Christmas Miracle: Revolutionary Road and The Wrestler Aren't Terrible

Two dubious directors clean up their acts and make movies that are actually quite good. 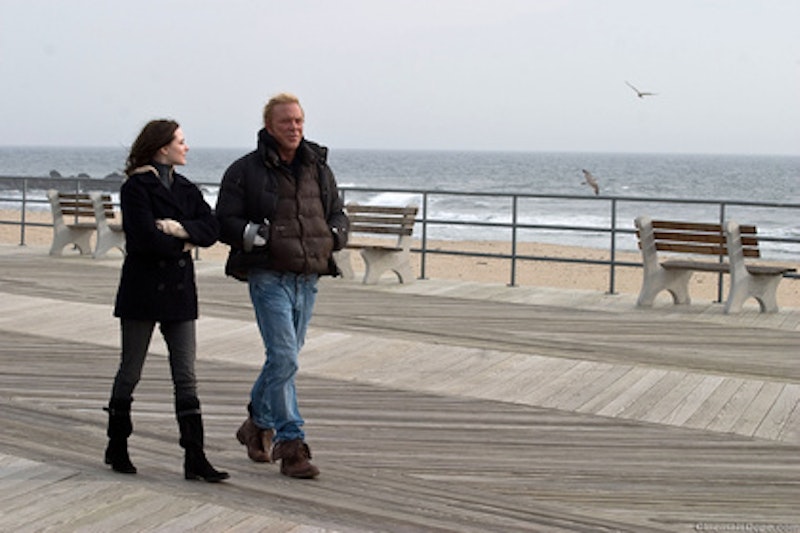 Evam Rachel Wood and Mickey Rourke in The Wrestler.

To my great and appreciative surprise, two pillars of late-1990s cinematic doggerel have made some of the season’s most intimate, urgent dramas. The Wrestler and Revolutionary Road, directed by Darren Aronofsky and Sam Mendes, respectively, nearly atone for the former’s trio of humorless pretentious nonsense (Pi, Requiem for a Dream, and The Fountain), and the latter’s juvenile American Beauty. Neither of these new films have any business being as good as they are, and yet there are moments in each that rank among the most affecting moviegoing experiences I’ve had all year.

Predictably, Revolutionary Road sags a bit in its maudlin final reel, but its exacting art direction and phenomenal cast (led, interestingly, by Leonardo DiCaprio and Kate Winslet, themselves conspirators in another touchstone of late-90s cinematic self-importance) elevate Mendes’ thematic bluntness to true emotional honesty. The Wrestler, meanwhile, has a great ending and an equally stunning lead performance. Mickey Rourke’s Randy “The Ram” Robinson is emotionally stunted where Revolutionary Road’s central couple is a pair of flailing downed wires, but he’s even more affecting. The visceral impact of The Wrestler is undeniable, and not just in the cheap bodily-violence manner of Aronofsky’s early work; The Ram’s physical pain is, by nature of his work as a pro wrestler, indistinguishable from his emotional state. By combining the two so powerfully, Aronofsky’s film and Rourke’s performance are unforgettable in the truest sense.

Based on Richard Yates’ influential 1961 novel, Revolutionary Road offers the complete opposite view of 1955 America on display in Cadillac Records. Here, the milieu is East coast suburbia and the mood is one of inexhaustible existential crisis. We first see Frank and April Wheeler as they catch each other’s eyes at a party, then Mendes guides us through a beautiful montage of their courtship and marriage, only to pause a few years in as April’s unrequited stage career comes to a screeching halt after a disastrous local theater performance. The couple fights on the way home, in an argument that spills out of the car and nearly ends in violence. This whole opening sequence, set to sultry period music, is thematically necessary and aesthetically perfect. First, it allows for the Wheelers to appear fully human rather than monotonally discontented. It captures the dashing sweep of early romance with grace and compassion before submerging us in the agony that follows. And it introduces the film’s visual palette, shot by Roger Deakins: warm yellows and browns, velvet cigarette smoke, clean color lines, and well-pressed slacks and dresses.

Revolutionary Road’s world of daytime cocktails, gray flannel suits, and white picket fences is so overly familiar that I kept expecting Mendes to sneer at it, as he did with contemporary suburbia in American Beauty. Yet the sneer never comes, and instead by the time Frank and April buy their house on the title street (a clunkily symbolic white building with red and blue shutters), it’s clear that Mendes has no pretensions to pseudo-satire. Revolutionary Road’s impossibly pristine art direction is rather a means of getting right into the human drama at its core; the scenery is so semiotically familiar that Mendes is able to bypass expository explanations for the Wheelers’ marital unhappiness and instead get right to his story. Rather than relying on visual shorthand as a crutch, Mendes and Deakins have successfully created the ultimate romantic 50s scenery—the most perfectly coiffed housewives, the most gleaming chrome fixtures—and revitalized it by using it to frame a powerful human story.

With two kids and mutually unsatisfying daily routines (he’s a drone for the same company that his father once worked for, she’s a housewife), Frank and April hatch a plan to move to Paris, where he once stayed during the war, and indulge some vague, heretofore unseen semi-artistic qualities in themselves. Frank is amused enough by the idea to play along, but April is desperate for the move. It’s a given that their dream is eventually deferred, but Revolutionary Road nevertheless proceeds leisurely and surprisingly, with secondary characters (particularly an incredible performance by Michael Shannon as an ex-mathematician just out of the mental hospital), effectively portentous and powerfully compact conversational scenes throughout. Winslet is unfortunately saddled with the script’s blandest lines, but DiCaprio is incredible. He’s never been able to pull off accents, but few contemporary actors are as well-suited to 20th-century scenery as he is, as evidenced by Catch Me If You Can and The Aviator. After spending his 30th birthday seducing a female coworker, Frank comes home to find April has made a candlelit dinner with their children. The fleeting look on DiCaprio’s face contains incredible emotive depths.

The final tragic act of the Wheelers' marriage is telegraphed from early on, and Mendes ultimately can’t resist a final scene that pretends more wisdom than it actually contains. (Thomas Newman’s overly mournful original music doesn’t help, particularly when it undercuts the phenomenal period pop and jazz from The Orioles, Nina Simone, and others.) We already know from American Beauty that he’s no philosopher, but for the majority of Revolutionary Road he uses incredible aesthetic vision to tell a realistic, powerful story without resorting to platitudes or projecting the Wheelers as somehow illustrative of national character. Revolutionary Road may only be 75 percent of a great film, but that 75 percent contains some of year’s most powerful, purposeful filmmaking.

Mendes’ movie is a triumph of big-budget art direction and lush cinematography, but The Wrestler achieves its considerable power by sheer brute force. Shot in a handheld documentary style as weary and roughed-up as its protagonist, The Wrestler is so incredibly lifelike during its ring and backstage scenes that it’s almost a drag when the actual story, concerning The Ram’s relationships with a stripper (Marisa Tomei) and his estranged daughter (Evan Rachel Wood), reappears. The Ram was once a Hulk Hogan-style pro wrestler and is now resigned to working in a supermarket storeroom and travelling the amateur circuit on weekends. The world of minor-league wrestling is, like the suburban wasteland of Revolutionary Road, ripe for easy mockery and derision, yet Aronofsky depicts this culture with a reverence and compassion that could only come from a fan.

The cast in these scenes is largely composed of real-life wrestlers, and the variety of body shapes and personalities on display recalls Fellini’s circuses. Strikingly, Rourke fits right in with this community, his body now a scar-flecked blunt object that remains tenuously held together by spandex, bandages, and steroids. Rourke’s performance here is quiet and reserved, yet his total physical embodiment of this near-broken man is absolutely stunning. Imagine Jake LaMotta without the swagger; The Wrestler is likewise merely observational where Raging Bull was morally purposeful.

To say this is the subtlest, most human Aronofsky movie yet is barely a compliment; his first three films were all show-offy, faux-intellectual silliness. But The Wrestler, as its title implies, is a gruff, no-nonsense film that feels like a different director. Up until now, Aronofsky took a bogus pride in physically destroying and humiliating his protagonists in order to show the danger of their addictions; here, The Ram’s physical punishment is tempered by his resilience and love for his sport. The affection and support he offers the younger wrestlers is truly touching, as is his commitment to the fans that show up for autograph signings and events. Aronofsky’s first films pinballed from higher math to drug addiction to time travel, but in his gentle, unadorned backstage scenes among the amateur wrestling community, he finally succeeds in taking his audience to a believably foreign place.

As a narrative, particularly in Tomei’s scenes, The Wrestler feels slightly forced, but only in comparison to the stunning frankness and realism of the athletic scenes. Somehow, out of a world filled with parodic pseudonyms, gratuitous violence, and pounding hair metal, Aronofsky and Rourke have carved some of the most authentic-feeling human drama of the year. The Wrestler is affecting precisely because of its physical intensity, and as such is unforgettable. It is as much a creative renewal for its director as its star.