Appaloosa has a shaggy, dirt-worn feel until Renée Zellweger shows up and interrupts the boys’ club. 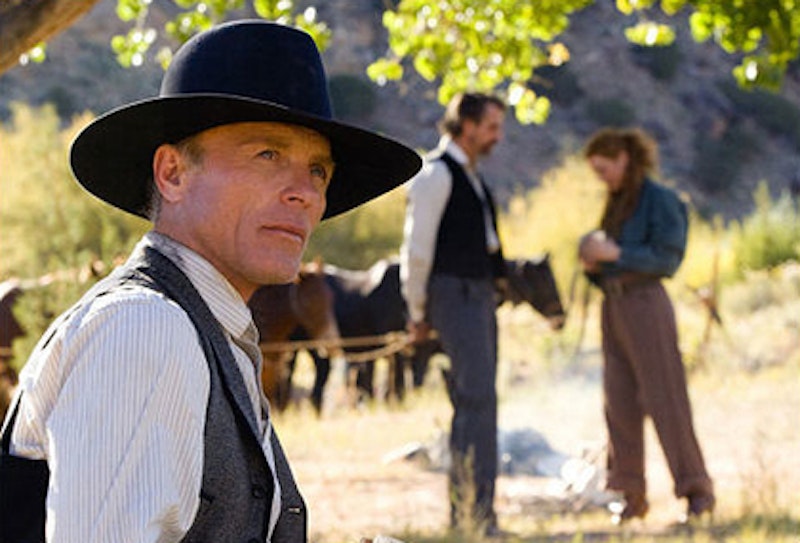 If you’re looking to tell a story about the value of male friendship (as opposed to male-female romantic entanglements), you’re best off following the template laid out in Ed Harris’ new western Appaloosa: Get a couple of guys, preferably lifelong-friend types who share the same job, and then give one of them a girlfriend out of the blue. Let the jealousy and awkwardness ensue organically until a third-act conflict arises that forces some form of resolution, usually the male characters’ realization that friendship and romantic relationships can healthily coexist in a man’s life.

Casting is key. Your two guys need to have an appropriately close relationship so that their intimacy’s eventual dilution is adequately unnerving to inspire the soul-searching you’ll foist upon them in act two. Your third wheel, however, needs to be equal parts femme fatale and lovable heroine; she needs to be attractive enough to one or more of your male duo that their bond is sufficiently threatened. Someone like Jeanne Moreau, who wooed two men to their wits’ ends in Jules and Jim. Or even Maribel Verdú, who slowly unpacked two young men’s hangups and insecurities in Y Tu Mamá Tambien.

For its starring pair, Appaloosa has Viggo Mortenson and its director and co-writer Ed Harris, two chisel-chinned actors who look like they’ve been born to act in westerns. Both have a steely gaze and intimidating emotional reserve; they’re such natural fits as for-hire lawmen that they barely appear to be acting at all. But as the movie’s temptress, Renée Zellweger just doesn’t fit the bill. You can perhaps buy her physical attractiveness if you accept that Sherriff Virgil Cole (Harris) is into the squinty-eye thing. The bigger problem is the way her character is written—she’s too weak, too needy, and too emotionally fickle to ever seem like a drop-everything catch to the irascible, independent Cole. Harris’ direction is assured and his male universe predictably well mapped, but Appaloosa’s central conflict never feels realistic in the midst of all the sun-blanched horizons and gunplay.

Cole and his partner Everett Hitch (Mortensen) are hired by the town of Appaloosa to protect them from Randall Bragg (Jeremy Irons), who in turn hires Ring Shelton (Lance Henriksen) to even out the legal proceedings with some orchestrated violence of the rootin’-tootin’ variety. Between these four male leads, there are enough craggy faces and deep-throated threats to make for a fantastic shoot-em-up; the spare, attentive art direction and Harris’ cinematography (aided by Director of Photography Dean Semler, who’s got a resume full of western crap like Young Guns and The Alamo) add a fittingly dry, expansive appearance. The exterior shots are full of sunsets and distant caravans, while the interior shots utilize rich deep-focus and dramatic angles to build a sense of scale. Irons, who’s built a career on playing upper-class men strangled by their own repressed feelings, shows himself to be uniquely physically suited for frontier-era rabble rousing; his rail-thin frame slinks menacingly through his scrappy band of followers, and his pristine diction perfectly encapsulates the devilish capitalist opportunism that so offends (and ultimately replaces) Cole and Hitch’s Manichean sense of morality and chivalry.

And yet there’s Zellweger in the middle of all this, who does her best with a dully written character but nevertheless drags the movie down every time she appears, which is often. Her character, Allie French, arrives in Appaloosa shortly after Cole and Hitch take over, and she quickly romances the spurs off the former, despite his acknowledging some serious sexual repression that never gets fully explored. “Ms. French,” as the eternally gallant duo refer to her, is as bland a plot device as her name implies, a woman who gets literally pulled out every now and again to advance dramatic tension, as if the flinty visages of Irons and Henriksen somehow weren’t enough conflict to keep a gunslinger epic interesting.

Director Harris, however, seems allergic to playing up the “epic” angle, which works to his advantage when Ms. French isn’t periodically reappearing to force a plot development. In these moments, when Cole and Hitch banter back and forth or attend to the workaday tasks of martial law, Appaloosa glides by on small gestures and scene building; there’s even a pre-Method stiffness to the acting that emphasizes the traditional drama rather than the aesthetics. It’s an old-school western that seems oblivious to the purposeful restructuring of the genre in 70s films like McCabe and Mrs. Miller or Little Big Man and instead hearkens back to the dark-stranger-comes-to-town narratives of movies like Bad Day at Black Rock. Like that movie, Appaloosa uses the endless landscape (and the barreling intensity of steam engines) to implicitly explain the lawlessness of the time—the echo of gun blasts proof of crime’s easy disappearance among the dry sprawl—without succumbing to epic storytelling gestures itself.

The result is a film that’s too modest and comfortable for its own good. It’s one thing to strip iconic gunfight sequences of their romance the way Altman did in McCabe and Eastwood did later in Unforgiven, but Harris has no such intentions; his gunfights are just curt and unsatisfying, as if the only thing that interested him about westerns was the costuming. A director doesn’t have to repurpose our national myths any time he heads west, but he should at least acknowledge them, and Harris’ film seems content to just tell a western story without ever evoking the narrative majesty that the desert has inspired in generations of American art.

He comes close, once, in a beautiful and nearly wordless section involving a tribe of Indians. Then again, at the film’s end, when leisure and capitalism start doing a better job of keeping everyone in line than Cole and Hitch, we’re given an insightful look at how life actually may have been during this unsettled time. But Harris pulls up short without carrying through on a possible Lonesome Dove-style revelation about the passing of the old west. Throughout Appaloosa, we’re given beautiful glimpses at miniaturized American history, but Harris too often lets his story—and his female plot device—steal the scene.