Rachel Getting Married blends the director’s affinity for “normal” America with his documentarian urges, resulting in one of his best films. 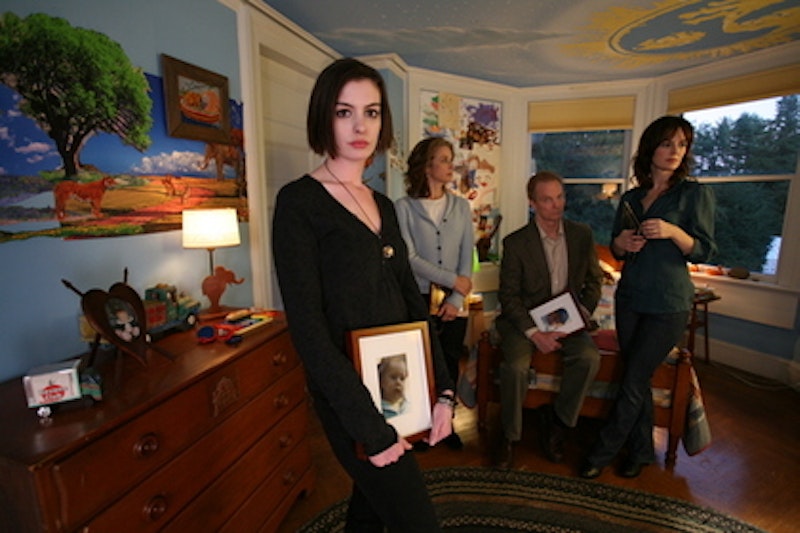 The new film Rachel Getting Married appears to be many things—a knowing Oscar bid for star Anne Hathaway, who plays a recovering drug addict; a kitchen-sink quirkfest where characters wear funny outfits and sing a lot; or worse yet, a heaving family melodrama in the Little Miss Margot at the Smart People’s Big Fat Greek Wedding mold. To my great surprise and enjoyment, it is none of these things. At different times it comes close to being all three, but director Jonathan Demme and screenwriter Jenny Lumet always rein things and keep us focused, unwaveringly, on the humanity of their characters. Because its setup and plot elements are so reminiscent of many other, much worse recent movies, it’s hard to pin down what exactly makes Rachel Getting Married a superlative, beautiful movie. But it is. Demme’s directorial compassion allows him to enter emotionally messy places, and his film achieves that most elusive quality: it feels real.

In his earlier movies like Melvin and Howard or Something Wild, Demme showed an affinity for America’s weird corners—a community surrounded by the Nevada desert, or small-town Pennsylvania during a high school reunion. Even his mid-period Oscar-winning entertainments, The Silence of the Lambs and Philadelphia, were distinctly humanist, interior dramas in the guise of Hollywood genres. Along the way, he’s also shown a distinct flair for documentary, specifically concert films like the recent Neil Young: Heart of Gold and my bid for the genre’s greatest success, Stop Making Sense. Rachel, while shot in a handheld style that’s new for the typically flashier director, feels like a natural merging of these two impulses. The camera, led by cinematographer Declan Quinn, roves through the frequently packed scene: a weekend wedding party for Rachel (Rosemarie Dewitt) and Sidney (TV On the Radio signer Tunde Adebimpe) at Rachel’s father’s multistory house. Musicians practice, old friends and estranged family reunite, emotions ebb and flow; as in those earlier films, Demme draws us into an American community’s insular world with such depth of detail that we can’t help but sympathize with the characters.

Not surprisingly for a director whose last two documentaries focused on Neil Young and Jimmy Carter, the nuptial weekend in Rachel Getting Married is almost a love letter to east-coast liberalism. Interracial relationships (including the title one) abound, as do vaguely antiwar/anti-Bush sentiments, music styles both American and foreign, and voracious cultural miscegenation—Rachel and Sidney have chosen, inexplicably to us, to have an Indian-themed wedding, including a live string band and the bridal party in saris. But while the movie evokes a liberal milieu, Demme never allows it to sink into cliché. (Or, to use the parlance of our times, he reveals the complexity of people that certain culture warriors would knee-jerkingly deem “elitist.”) He never falsely chides his characters for their learnedness as in Smart People or Margot at the Wedding; he never plays the multiple-culture angle for easy situational comedy; he never lets any character become identified with a single quirk as in Little Miss Sunshine. And most importantly to my mind, he allows a place in his ultraliberal scenery for religion—unironically, nonjudgmentally, just realistically, the way faithful families actually live with it. Demme and Lumet’s refusal to bow to an antagonistic red state/blue state dichotomy is inspiring, not least for its uniqueness in our current pop culture.

The wedding ceremony and rehearsal dinner toasts allow the families’ beliefs to show, but faith plays a bigger role in the subplot surrounding Hathaway’s character Kym, Rachel’s ex-junkie sister who gets special permission to leave rehab for the weekend. As required by the 12-step sobriety program, she seeks out the local addiction recovery meeting and attends daily, in scenes that are striking for their realism and dramatic power. The recent similar movies from which Rachel stands apart all lacked for a defining conflict; they felt, for the most part, as if their writers and directors had merely supplied characters with boilerplate family issues and released them into dramatic situations like bumper cars. Rachel Getting Married, on the other hand, coheres thanks to its strong central character and its exacting depiction of her specific illness, which necessarily involves her difficult relationship with God. The faces in the film’s recovery meetings are not movie faces, not even Hathaway’s, who does tremendous work with a complicated characterization that could have come off as too self-consciously unpretty. As her family and character’s back-stories reveal themselves throughout the film, we watch Demme and Lumet evade cliché time and again, right at the cusp of giving in. The slow uncovering of each relationship—particularly the daughters to their emotionally distant mother, played by Debra Winger—never feels expository. Instead, we gradually come to understand family dynamics by watching cycles of guilt, pain, love, and forgiveness. This movie feels as protean and nuanced as family itself.

I’ve already spent too much time applauding Rachel Getting Married for what it’s not, which is necessary but unfair to its considerable positive attributes. Ironically, I found myself occasionally bored, or annoyed by the characters. But I also found myself reveling, or feeling uncomfortably close to personal tragedy and recovery. Through a combination of handheld camerawork, deft editing, subtle writing, and vibrant performances by professionals and non-actors alike, Rachel Getting Married achieves what few movies do: it enlarges our emotional state. It makes us feel an implausible level of engagement with strangers—sometimes awkwardly, sometimes joyfully, but always honestly.

The cynic in me kept wanting there to be less flailing emotion, or fewer lagging spots, but Rachel Getting Married proceeds with its own measured pace, and to enjoy it you have to eventually give yourself over to its conditions. You have to follow the camera through the house’s corridors and stand in the middle of a dance tent during the reception. You have to accept the slow moments and stifle your biases and preconceptions, safe in your hope that the weekend’s joy will ultimately rule. In other words, you have to act like you would when attending a wedding half-filled with messy familial history and half-filled with total strangers.

That’s the final cliché that Rachel ultimately redeems, and the reason it’s so affecting and wonderful: It’s like life.