The Cadillac of Music Biopics 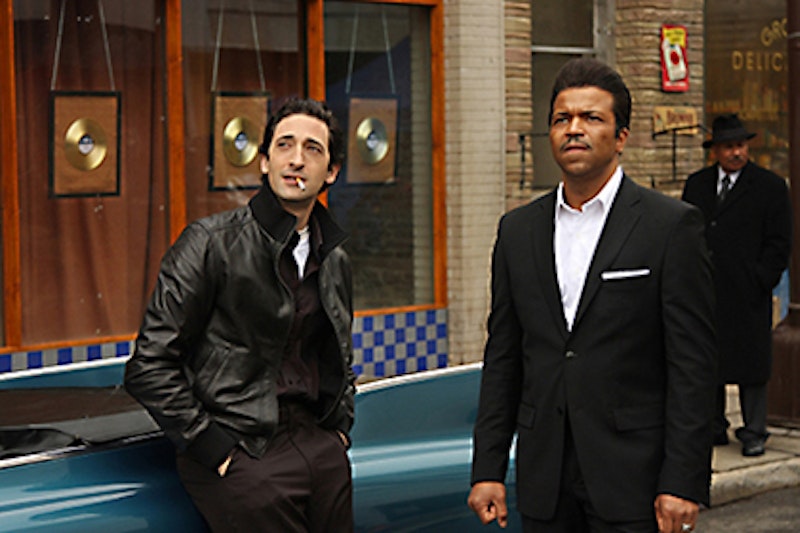 Darnell Martin’s new film Cadillac Records could be better shot and more evenly paced, but even so I wished it were 10 hours long. There are too many inspired performances, both musical and otherwise, for a movie this short, just as there are moments where the cast’s excitement over this incredible material is nearly blinding. Cadillac Records feels simultaneously like a labor of love, a cultural celebration, and a party between friends. I occasionally wanted it to feel more like a film, but its joy is infectious.

The title is important. Rather than simply taking the name of its subject, Chicago’s Chess Records, writer/director Martin focuses our attention on the implications of the title car, which was a symbol of unattainable success for both the label’s black artists and its white founder Leonard Chess (Adrien Brody), an immigrant Polish Jew. The desire for mainstream material achievement was the grail that united these disparate minorities, more so even than the music; Leonard has an improbably keen ear for delta blues and pop crossover potential, but his interest in the music is foremost that of a businessman. He decides to get out of the junkyard business and open a “race music” nightclub in the black part of town, but when vandals set the club on fire, he uses the insurance to build a recording studio and capture some of the best talent he’s heard.

First among these was Muddy Waters (Jeffrey Wright), a Mississippi sharecropper who in 1941 catches the attention of a traveling Library of Congress employee named Alan Lomax and then moves to Chicago to see about a music career. Wright has too often been confined to stunted, subordinate men (Syriana, W., and even his role in the recent James Bond movies), but here he finally gets to let it rip, even more so than in Jim Jarmusch's Broken Flowers; his Muddy is a hot-blooded showman and fully-formed character. His trademark pompadour grows gradually over the course of the film but he always reverts to a doo-rag when offstage, a powerful symbol of his ascending fame and ego coupled with deep-rooted humility. We see this latter quality first, when Lomax plays back a recording and Waters whispers with an awestruck grin, “It’s like meeting myself for the first time.”

Such potent occasions of personal discovery arrive constantly throughout Cadillac Records, without any of the usual “Look at this important historical moment!” gesticulations that mar the biopic genre. Cadillac moves too quickly for that kind of thing; it’s always hurtling forward to celebrate more music and its creators. Waters soon meets up with the young harmonica player Little Walter, who would be he his greatest, most difficult friendship and most important musical foil. When it’s time to get in the studio and on the road, however, Chess only has the resources for one man. The bond that subsequently forms between Waters and Chess is an expert, economical depiction of a very specific male friendship. The two have an undeniable respect for each other’s talents and integrity, and as a biracial pair driving through the Deep South they are forced to confront their own latent racial prejudices with incredible honesty. But when Chess gives Waters the Cadillac they’re driving, it’s the first of many borderline extortions of his artists’ naïveté and lust for wealth. To Martin’s credit, her script never takes sides in this decade-long give-and-take, but it never ignores it, either. Her characters are too human and complicated to serve easy moralizing.

More and more recognizable names enter the picture, all performed with gusto by an extraordinary ensemble cast. Fascinating movies could be made about Waters’ nemesis Howlin’ Wolf (Eamonn Walker), Chuck Berry (Mos Def), Etta James (Beyoncé Knowles) or Willie Dixon (Cedric the Entertainer) individually, but any single-character biography would require more posturing and self-consciousness than the performers are allowed here. Martin’s film is so egalitarian in its focus that each character instead gets their individual moments to shine, and the actors (all doing their own singing) don’t waste a single one. Walker is brooding and unforgettable as the irascible Wolf, the underuse of whom is rivaled only by Cedric the Entertainer’s Willie Dixon, who remains mostly relegated to an unnecessary voiceover. Knowles takes a surprisingly unglamorous turn as the tortured, drug-addicted James, and while her voice never reaches the raspy power of the original, her commitment to the role is obvious and complete. (She also serves as Cadillac’s executive producer, further proof of the film’s personal significance to the cast.) And while his character is never given the rounded treatment of Waters, Mos Def astounds in his embodiment of Chuck Berry. It’s a treat to see him approach the role with such glee and humor, particularly after Def’s reference to Berry in his enraged song “Rock N Roll” from his 1999 LP Black on Both Sides. Here, when the Beach Boys steal “Sweet Little Sixteen” for their own “Surfin’ USA,” Berry’s anger is tempered by his own inherently goofy personality. This is the man who arrived at fame by duckwalking, remember.

It’s true that every imaginable music-biz movie cliché is present in Cadillac Records—womanizing, a character’s introduction to and subsequent struggle with alcohol, another’s drug overdose, some cheesy montages of songs literally soaring up the charts, an executive tearing up his award-filled office in a bout of personal dismay. But it's also perhaps cliché to sing “At last/my true love has come along,/My lonely days are over”; in music, exuberant performance redeems even the most timeworn sentiments, and so it is in Cadillac Records. The streamlined script's occasional moments of dramatic overreaching simply feel as emotionally direct as the songs themselves. “You my white Daddy!” Little Walter exclaims when Chess gives him his first car, and the sentiment is loaded with racial, personal, and cultural weight. But it’s a hug that follows, not a sermon or a lesson about the era’s inequality; Cadillac Records floats by on this kind of emotional implicitness.

This is a better film than Ray or Walk the Line or Dreamgirls because it is actually about music. The rushed, overcrowded story line may contain a handful of biographies jammed into a single arc, but this also prevents any one actor’s ego from ballooning above the material. The film also completely ignores Leonard Chess’ brother and business partner Philip, proving that Martin was judicious with her narrative when thematically appropriate; this movie is overstuffed because it needs to be in order to capture a collective sense of discovery.

Martin sometimes seems too intent on advertising her characters’ historical importance, as if the tacked-on montage at the end to explain when each was inducted into the Rock and Roll Hall of Fame somehow says more about Chess’ greatness than, say, “Smokestack Lightning” itself. But if the whole enterprise occasionally gets carried away by its own excitement, that’s a crime of excess generosity, and easily forgivable. The music is the true star here; it’s the ladder on which these actors climb to such emotional heights. As a danceable encomium to American visionaries, Cadillac Records is not to be missed.