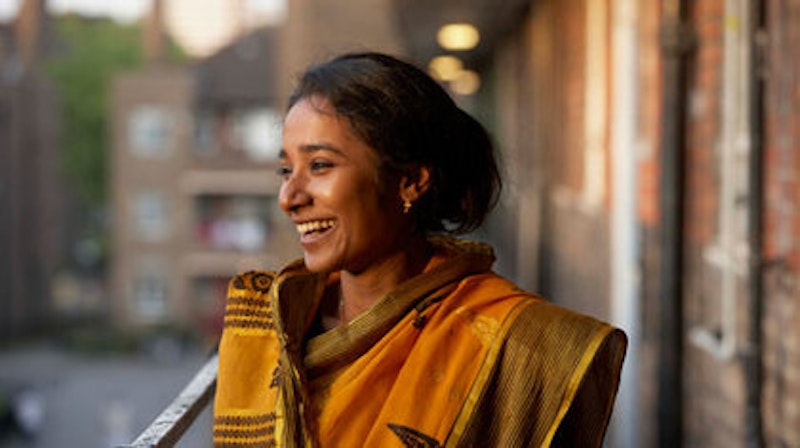 Sarah Gavron’s Brick Lane ends with its most affecting moment: in a long, slow panning shot from high above, protagonist Nazneen Ahmed plays with her two young daughters in the English snow. They lie down and make snow angels, their moments synchronous for a coincidental second. Their smiles beam, not least because they are nearly the first real smiles in the entire film. Indeed, this lovely, if romanticized shot (that’s a pretty thick snowfall for soggy London) is also a breath of fresh air because of how radically it departs from the claustrophobic and oddly gloomy 105 minutes that precede it. For just a few seconds, Gavron’s characters actually breathe, and it makes her heroine seem more human than any other part of the film.

The movie concerns Nazneen’s time in London, a period that starts at age 17 when her father sends her to an arranged marriage with an older man and she leaves her beloved sister at home in their Bangladeshi village. The director Mira Nair recently told a similar, more affecting immigrant’s fish-out-of-water tale in The Namesake, another film based on a post-colonial novel by a female writer from the Indian subcontinent (The Namesake was written by Jhumpa Lahiri, Brick Lane by Monica Ali). A crucial difference between the two, however, is that Bangladeshi Nazneen and her husband Chanu are Muslim rather than Hindi; when the Twin Towers fall in Brick Lane’s third act, there’s slightly more at stake than your average assimilation vs. cultural conservation narrative.

Even so, there aren’t any great surprises in Nazneen’s story; from the moment a handsome young man enters her apartment to get her started in a sewing business, you know that her relationship with portly, Sancho Panza-like Chanu won’t make it through the film unscathed. The conversations and dilemmas the immigrant characters face also won’t be any surprise to viewers familiar with Nair’s similar work, or Jim Sheridan’s In America, or even Paul Mazursky’s Moscow on the Hudson. Not that these stories aren’t worth telling, but anyone with even a modicum of sympathy for immigrants in Britain and the U.S. won’t have much to learn from Brick Lane; believe it or not, it’s tough to leave your home and begin anew in a foreign place. For much of the film Gavron even overdoes the dichotomy between pastoral, sun-spotted Bangladesh and her grimy, smoke-filled London, as if middle class white viewers’ Liberal-Guilt-O-Meters won’t already be surging at the mere mention of arranged marriage.

But despite appearances, Gavron actually skirts the bigger sociological concerns at her story’s core, instead opting to tell one particular woman’s story. When, after 9/11, her surrounding Muslim community starts getting scared about growing anti-Islamic sentiment, we know the fear only through their dialogue and town hall meetings, and we know those only through Nazneen’s attendance. Brick Lane isn’t a depiction of The Way We Live Now; it’s the story of a woman named Nazneen who happens to live at a particular time. To tell such a story, Gavron adopts a visual style of extreme close-ups in gently blurred focus, tumbled together in a swirling, constant montage. Jean-Luc Godard did a version of this in his earliest films, mainly as a means of speeding along his characters’ dialogue to match Breathless’s speeding jazz cadences. Terrence Malick’s use of the style in Days of Heaven (1978), The Thin Red Line (1998), and The New World (2005) falls a little closer to Gavron’s highly textured version, but Malick uses the montage to simultaneously enlarge his characters’ emotional states—as if their joy or confusion were great enough to transcend a single shot—and to insist they are dramatically secondary to the majestic natural scenes that surround them (just look at the way the New World clip below ends).

Gavron makes her debt to Malick clear—the early childhood scenes, with two girls running through a field of windswept reeds, also feel indebted to Kaneto Shindô’s equally (but purposely) disorienting Onibaba—but her use of close-up, squinting montage feels more like a forceful attempt to make us sympathetic to Nazneen, almost as if she’s literally trying to shove the camera into her character’s head. But this effect works best in measured doses and in contrast to other moments wherein the camera simply, you know, records people acting. Hence the superlative power of Brick Lane’s final shot, in which the camera glides just enough to keep the family in frame. For once, we are allowed to observe characters instead of responding like Pavlovian dogs to visual signifiers. (Let’s not even start with the music, which sounds like the soundtrack Sting might hear in his head while walking bare-chested through the ethnic aisle at Whole Foods.)

The actors in Brick Lane do serviceable work considering what they’re given. Even within the small cast, only the doltish Chanu—played by Satish Kaushik, one of several Bollywood stars in the film—expands beyond one note. Chanu, who we’re pre-programmed to despise since he’s the undoubted beneficiary of an arranged marriage—plus he’s fat, with corns he makes Nazneen cut off each night, so Gavron basically dares us to sympathize with him—turns out to be a real person, if perhaps one who’s a little behind the times in the UK capital. Everyone else, even Nazneen (played by Tannishtha Chatterjee) is given one emotion or personal characteristic and told to run with it. Writing like this keeps the audience happy by preventing them from doing any work, but it makes for superficial storytelling. No wonder Gavron’s camera has to try so hard to make us feel something.