What kind of potential Righteous Kill viewer are you? 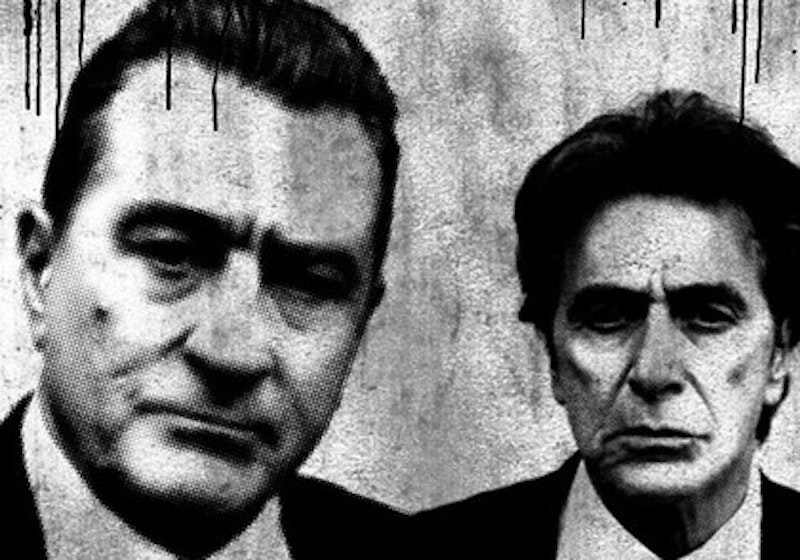 ATTN: Angry white men
SUBJECT: Have we got a movie for you!

Do you hate your job? Do you have a nagging, general animosity towards other people, specifically minorities and authority figures? Do you blame them for your own deep-seeded dissatisfaction with your personal and professional life and wish that someone would just shut up and do as you say every once in a while? Do you enjoy reading Maxim because it keeps women at a disrespectful, marginalized, and over-sexed distance and therefore masks your own inability to please your wife and/or girlfriend either physically or emotionally?

Well today is your lucky day. We’ve made a movie that can be summed up in just a couple words: De Niro. Pacino. Righteous Kill. This is a movie for men, real men, guys who know the right answer when your boss asks why you’ve been late to work recently: Fuck you. Guys who know that sometimes a woman just needs—no, wants—a good, hard, doggy-style fucking to put her in her place. Guys like you.

Here you can watch the guy from Scarface and the other guy from that taxi movie act like real men, even more than the first half-hour of Heat that you watched on TNT before it got boring. They’re old detectives with real guy names, Turk and Rooster, and sick of all the bureaucracy and paperwork; what they really want to do is clean up the streets. You know, get rid of all the riff-raff and drug dealers, specifically black and immigrant ones, with a couple well-placed bullets. They quote Dirty Harry with reverence. They lift weights together (in a totally not-gay way) and say “fuck” a lot, like when they get asked if they’re willing to risk their pensions for a little renegade vengeance and they respond in unison: “Yeah. Fuck yeah.” And these guys are almost 70 years old. If they can kick a cocky rapper’s ass—did we mention that 50 Cent is in this? Could you forward this to any black friends you may have?—then just think of how tough you could be.

There’s more: They talk down to a couple of younger hotshot cops, one of which is Hispanic, and share an honest, working-class Roman Catholic upbringing. They drink whiskey and wear a lot of black. There’s a lot of chugging, angry rock music playing in the background, the better to drown out all the pussies and ballbusters that stand in the heroes’ way. And there’s even a big surprise twist at the end, because this isn’t just some piece of crap action movie…these guys have Oscars and stuff. Prepare to have your mind blown.

You’re a real man, a man who has the answers that nobody seems to want. What you need is a movie that reminds you it’s okay to kill people as long as they’re scum, particularly black or immigrant scum. You need a movie that validates your long-held beliefs that other people are stupid and that women, especially big-lipped and big-titted women who get off on rape fantasies, should be defended righteously in word and then borderline abused in deed. Get a big popcorn and settle in.

Okay, we’ve been here before so let’s just do this quickly and painlessly. This movie isn’t for you or anyone else who may think fondly of Taxi Driver, Goodfellas, Dog Day Afternoon, Serpico, Raging Bull, The Deer Hunter, Brazil, The King of Comedy, Once Upon a Time in America, Glengarry Glen Ross, Sea of Love, The Insider, Donnie Brasco, or, lord help us, The Godfather and Godfather Part 2. But you’ve got money to make and so we understand you’ve got to write about this new one. If you could deal with Two for the Money, The Recruit, 88 Minutes, Sleepers, Flawless, The Fan, Showtime, Gigli, Godsend, Hide and Seek, The Devil’s Advocate, and Any Given Sunday, then you can deal with this.

Sure, Righteous Kill is even dumber and less charming than most of those hack jobs, and maybe we could have been a little more judicious with the music (and the names; Turk and Rooster? We’re sorry), but give us a break. We don’t necessarily condone homicide or think women should be treated like blow-up dolls, we just know there’s a market for that kind of thing. Some of you are going to whine that we’re “making society dumber” or “peddling bankrupt, nihilistic pornography” or “expediting America’s moral and aesthetic decline,” but that’s just East coast snobbery and elitism. Do you really think you’re better than the people who see Righteous Kill? There are a lot of honest, hard-working people in small towns who just want to get a little titillation on the weekends, so they head for the nearest 37-screen Enormoplex and shell out 10 bucks plus popcorn to be entertained in a completely unchallenging way. Not everybody likes movies with subtitles or quiet moments or no famous people, and who are you to look down on them?

In a decade or so we’re all going to watch these two actors receive Lifetime Achievement Awards at the Oscars and then you can watch the inspiring montage of Michael Corleone and Johnny Boy and forget about all this. But for now, let everyone do their jobs just like we let you do yours. And just remember what Michael Caine said when someone asked him why he acted in Jaws 4: “Well, I’ve never seen Jaws 4 but I’ve seen the house it bought.”

Hey, at least The Women comes out today, too.

Pleasure doing business with you,