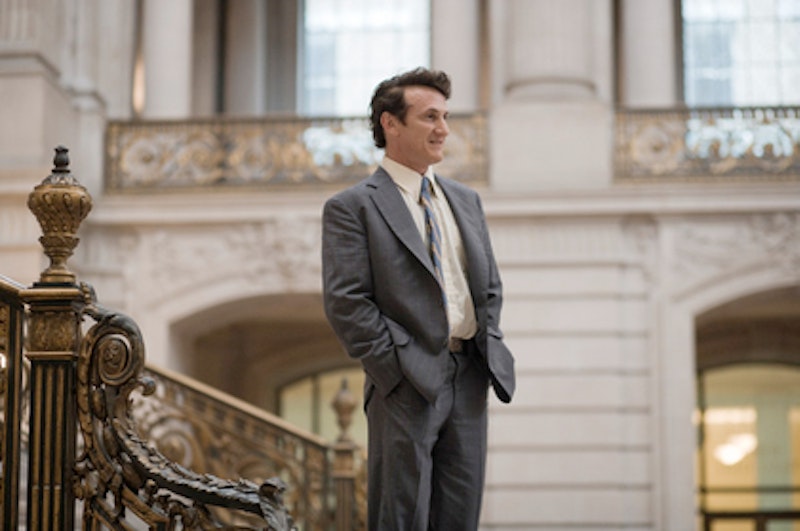 Harvey Milk, the first openly gay politician to hold significant elected office in America, once famously said that he wasn’t the candidate in his races; it was the gay rights movement that people were voting for, and he was just the figurehead. Sean Penn gets to repeat this line midway through the new movie about the man, Milk, but while the sentiment may have been uplifting in real life, it sums up the movie’s problems in this sentimental context. As directed by Gus Van Sant, Milk is a frequently animated and informative evocation of late-70s San Francisco and the gay rights movement, but its drama falls flat due to lackluster writing (by Dustin Lance Black) and a reductively messianic view of the title character that never explains his motivations or background.

Viewers familiar with 1985 Best Documentary Oscar winner The Times of Harvey Milk will find Van Sant’s film frequently redundant. Certain lines of dialogue, a handful of shots, and even a few newscasts are clipped like so many coupons from Rob Epstein’s documentary and faithfully reenacted in Milk, and when one takes into account the additional, myriad uses of period media clips throughout, it often feels like Van Sant barely scraped together an hour of original dramatic footage. The Times of Harvey Milk took a similarly idolized view of its protagonist, but it at least contained a brief exploration of his upbringing (he was born in Long Island in 1930 to Jewish parents and lived a very closeted lifestyle at home; that’s about all we get) that the new film almost entirely ignores. The tradeoff, however, is that Van Sant more ably exhibits the private drama behind Milk’s public persona, and he better positions the gay rights movement as the life-and-death struggle that it was.

We meet Harvey Milk (Penn) after he’s already been elected to the San Francisco city council. Sitting in his kitchen, he dictates an autobiographical tape to be listened to in the event of his assassination. This standard-issue biopic framing device—another verbatim loan from the Times doc—flashes us back to New York, 1970, where Harvey, on his 40th birthday, picks up a young gay man in the subway and spends the night with him. From this humble beginning springs the defining romantic relationship of Milk’s life; the young man is Scott Smith (James Franco), and the two eventually move to San Francisco as part of a mass migration to the purportedly gay-friendly Castro neighborhood. Here, Milk opens the photography supply store that will later serve as his political headquarters, and begins making the community acquaintances that second his self-given title “The Mayor of Castro Street.”

At this point, Van Sant’s film is bubbling along so amiably and sprightly that it nearly feels like more than the rote, conventional biography that it is. Penn is certainly game, and he and Franco are believable and endearing as a gay couple, but enthusiasm is not the same as depth, and the script is so intent on lionizing Milk and his era that it never gets beyond surface depictions of either. After a quick survey of gay beatings by cops, for example, one of Milk’s cohorts exclaims, “Someone should get into politics.” And once Milk decides to run, another of his crew helpfully reminds him, “You’ll be the first openly gay man elected to major office in the U.S.” The San Francisco scene is also drawn in pretty broad strokes, including numerous montages of mustachioed guys congregating on street corners in cutoffs and an obligatory use of “You Make Me Feel Mighty Real.”

Also problematic is Van Sant’s constant and distracting use of period television footage. Newspaper clippings and primetime news broadcasts frequently interrupt the more personal scenes and, along with the voiceover and occasional summarizing statements like those I mentioned above, the net effect is to make Milk feel like an illustrated textbook. What’s worse, they make Milk the man seem like a mere historical game piece. Having already cleverly satirized the discrepancy between real people and their media personages in his excellent film To Die For, it’s bizarre that Van Sant now falls back on the media depictions of Milk for validation of his importance and impact.

New characters and relationships continue to accumulate throughout Milk, notably the appearance of Emile Hirsch and Diego Luna in supporting roles as Harvey’s campaign helper and love interest, respectively, but they feel like signposts on the road towards the martyrdom we all know Milk will achieve. The movie dutifully reenacts the multiple failed campaigns that Harvey runs for city supervisor before eventually winning in 1978, right as the gay rights movement rises to inexorable proportions. But Milk’s victory coincided with that of another rookie city supervisor, the conservative Irish-Catholic Dan White (Josh Brolin), whose put-upon self-seriousness threatens the film’s disco fantasia scenery from the moment he appears.

Milk is best in the scenes between White and Harvey; their relationship is, at first, one of true respect, if not understanding. And Van Sant, to his credit, ignores his chances for cheap shots against religious conservatives and instead portrays the White family with dignity. A scene in which Milk attends their son’s baptism and nearly cries from joy is perhaps the most affecting in the film; here we see the depth of his compassion, and his ability to respect religion even as the evangelical anti-gay movement builds cultural momentum around him. But the politically advantageous friendship between White and Milk doesn’t last long; White grows increasingly furious at his colleague’s lack of support for a bill he proposes, and then becomes the only city council member to vote against a San Francisco anti-discrimination bill to defend homosexuals in the workplace. White resigns from the council and has some variety of nervous breakdown, resulting in his eventual assassination of Milk and San Francisco mayor George Moscone in their City Hall offices.

If the relationship between Harvey and White provides most of Milk’s best moments, the film’s greatest flaw is its final reel. Harvey Milk’s death was certainly tragic, as was that of noted gay-rights supporter Moscone, but both the new film and the 80s documentary refute the idea that Dan White became a murderer out of homophobic anxiety. Milk’s murder was random and inexplicable, but it wasn’t an open-and-shut hate crime. The truly enraging aspect of Milk’s death occurred after his assassination, in the so-called “Twinkie Defense” of White by his lawyers. Arguing that his mind had been warped by a junk food diet, the defense succeeded in having his conviction reduced to manslaughter, the lightest possible punishment for handgun murder. The Times of Harvey Milk documents this ruling and the ensuing riots with affecting candor and emotion, yet Van Sant’s movie ends on the day of Milk’s killing (an event which is played for maximum heartstring-rendering and scored with opera, as is the director’s frequent dramatic wont); the Twinkie Defense is mentioned only as an afterthought, in the summary title cards that display each character’s fate before the credits.

This is an inexplicable omission on Van Sant’s part, and one that ends the film on a final, disappointing note that recalls the many moments along the way when Milk begs to be a better movie. Here’s a movie with everything going for it—source material, ensemble acting, even a dash of contemporary topicality thanks to the recent Proposition 8 disaster—but which consistently fails to rise to the cinematic occasion. Van Sant had an opportunity to match his early-career depictions of gay marginalization with the hopeful Hollywood veneer of Good Will Hunting, but instead he made something closer to his schmaltzy, flat Finding Forrester. Milk is often breezy enough to overlook its heavy-handed gestures, but when it ends, Van Sant hasn’t taught us anything about the man that we couldn’t learn elsewhere.