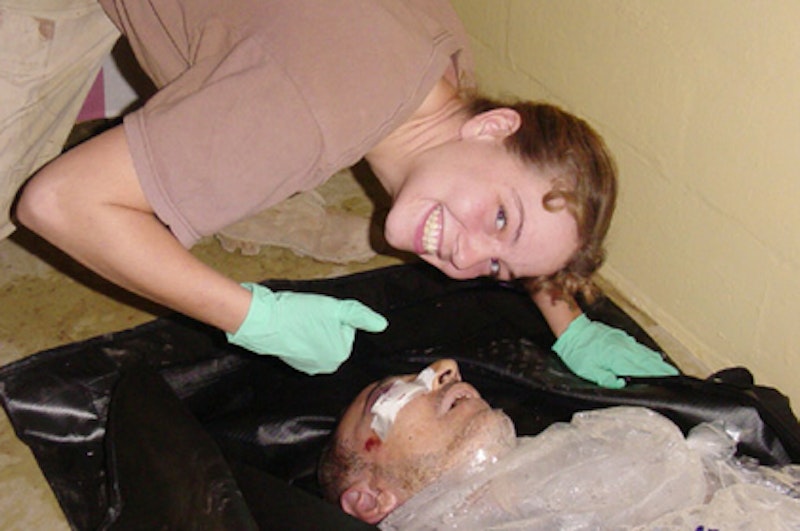 Sabrina Harman is one of the many infamous soldiers who get a chance to speak in Standard Operating Procedure.

One's opinion of Errol Morris's films generally comes down to one's opinion of his slow-motion reenactments. A staple of Morris's films since his landmark 1988 doc The Thin Blue Line, these slo-mo segments illustrate the two biggest ways in which his work differs from "traditional" documentaries: his complete subjectivity and his massive budgets. In The Thin Blue Line, for instance, Morris reenacted the murder of a Dallas police officer in order to prove the convicted man's innocence. The sequences are beautifully lit, perfectly photographed, and performed by a cast of professional actors. The argument was convincing enough to free the accused from prison, but the film was denied consideration for the Best Documentary Oscar on the basis of its scripted material.

Morris has since won that award for his 2003 film The Fog of War: Eleven Lessons from the Life of Robert S. McNamara, and the political bent continues in his new film, Standard Operating Procedure, which concerns the infamous pictures taken at Abu Ghraib prison that depict the U.S. Army's apparent torture of Iraqi POWs. Once again, Morris has no pretensions towards objectivity and takes an even heavier stylistic license with his subject. The result looks and feels like a topical masterpiece, but I'm not so sure it is.

The "characters" of Morris's films are always his interviewees, and he's scored quite a coup for this film, interviewing the so-called "rotten apples" pictured in the photos. The main participants include Javal Davis, Lynndie England and Sabrina Harman, whose letters to her partner in America form a sort of voiced-over Greek chorus. She, like most of her low-level colleagues, recognized that the "interrogation methods" being championed and practiced by her superiors seemed a little overzealous. In the letters she admits to being too frightened to stand up to her officers, so she began taking pictures as a means of documenting the horror. England too has an understandably bitter tone that belies her young age. She frames her own participation in the photographs as an outcome of her infatuation with Charles Graner, by all accounts the ringleader of infamous stunts like the human pyramid and the hooded Iraqi standing on a box with his fingers attached to wires.

And yet, despite Morris's obvious belief that these young people (most of the interviewees were between 21 and 23 years old at the time of the photos) were exploited victims of a larger cover-up, the photos are still pretty damning. Harman claims that she had to act a role so that no one would guess she was quietly undermining the torture, but it's still horrifying to see the young woman give a thumbs-up in front of a bloodied Iraqi corpse. Likewise England's claims that "the leash is slack" in a photo of her controlling a prisoner who's on all fours. This type of complexity takes the edge off what is essentially a one-sided rant on Morris's part, and it gives these "rotten apples" a roundness of character that the swift media judgment denied them.

There are a few black-and-white characters in Morris's story, however. On the good side is Janis Karpinski, a former Brigadier General whose outrage and eloquence over her misinformation provide Standard Operating Procedure with some of its most stirring moments. If the movie has anything close to a hero, it has to be Special Agent Brent Pack, the man who sifted through thousands of digital images taken with three cameras and was able to sync them up in such a way that he could provide a timeline of prisoner mistreatment over the course of months. Morris animates this process through incredible visual effects, all set to Danny Elfman's evocative score.

Then there's Charles Graner, M.I.A. among the interviewees since he's still serving time in military prison. But the portrait that's painted-through corroborated stories, but mainly through the photographs-is one of an amoral lunatic. Of all the hideous grins that populate the Abu Ghraib images, his is the most beaming and the most omnipresent. That he remains in jail is one of the small victories of justice in Morris's story, but the fact that none of his superiors served any time is the ultimate point. For anyone who's seen Morris's work before, it goes without saying that he sides with the rotten apples and directs our attention to the immorality of their leadership.

As for the reenactments, they serve the purpose here of universalizing the horrors of torture. The scenes, whether depicting a prisoner's-eye view of waterboarding or something more mundane like a turning key, are all shot in ultra high-contrast slow-motion, bringing out the dark colors and graininess of the concrete setting. Every sound effect booms-when discharged shotgun shells drop to the prison floor it sounds like a bass drum reverberating in a grain silo-creating a soundstage Abu Ghraib that is as menacing and disorienting for the torturers as for the prisoners. Morris has set himself the admirable task of exploring the stories behind these famous pictures, and the reenactments play a serious role in that effort, as they provide viewers with an inescapable, visceral version of the events in question.

And yet, as I wrote at the outset, the movie never delivers the knockout punch it seems poised to give. For all the revealing interviews, the insights into government secrecy, and Morris's obvious passion for the story, the movie never feels quite as profound as it wants to be. Perhaps it's that further news of military misdeeds in Iraq isn't particularly surprising, or that Morris's thesis is telegraphed from the beginning. Even as the film delves deeper in to the atrocity and ensuing scandal, its revelations never feel revelatory. It feels like an incredibly well-made documentary about an important topic, but it lacks the essential strangeness of Morris's best work, particularly Gates of Heaven, his 1978 debut.

Gates of Heaven is ostensibly about pet cemeteries and the people who use and run them, but in the course of its 80 minutes, the interviewees' monologues get farther and farther away from the subject at hand. By the end of the movie, we've listened to a former insurance agent talk about the power of positive thinking when digging dog graves; we've watched his stoner hippie brother plug in an amp outside and blast a guitar solo into the California valley behind his home; we've heard mourning couples describe inconceivable loss and the value of animals over man. It is one of the great documentaries precisely because it defies all logic of what a "documentary" is supposed to be, moving outward and away from its subject rather than deeper into it. For a first time viewer, there is no possible way to foresee how Gates of Heaven will proceed from one scene to the next. Standard Operating Procedure shows how far Morris has come as a visual filmmaker, but for all its cultural relevance it never reaches the bizarre genius of his first movie. By all means, go see this film for its topicality and insight, but seek out Gates of Heaven and The Thin Blue Line to see why Errol Morris is truly one of the great filmmakers of our time.