Man on Wire is a glorious defense of beauty for beauty’s sake. 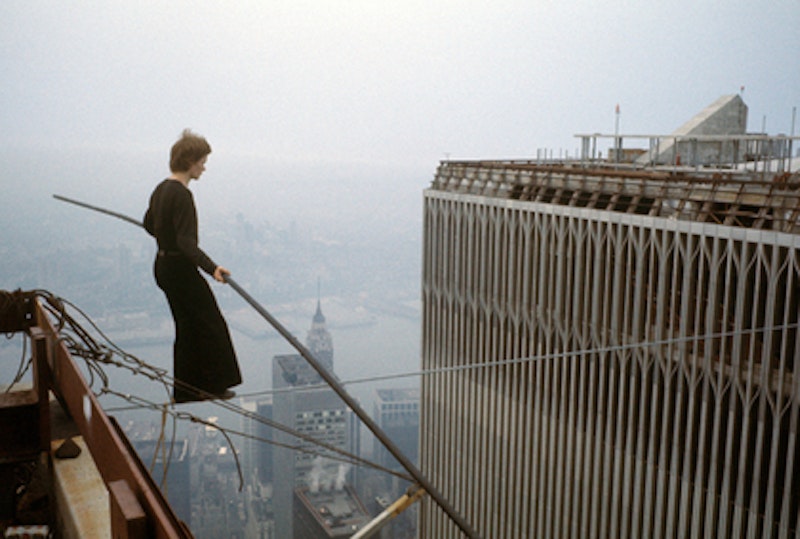 Sadness, beauty, danger, and whimsy all tumble together in James Marsh’s wonderful new documentary Man on Wire, which, through a mixture of archival video, reenactments, and original interviews, recounts Philippe Petit’s highwire walk between the World Trade Center towers on August 7, 1974. The greatest compliment I can give to Marsh’s film is that it captures all the warring, stirring emotions brought forth by Petit and his stunt, and in its own way Man on Wire is just as inspiring.

No street-performer-cum-conceptual-art-prankster is an island, of course, and a large part of Man on Wire’s greatness is the point-by-point dissection of the scheme by the multinational bunch that helped get Petit up to the roof and out in the air. This includes his girlfriend at the time, Annie Allix, a woman who acknowledges that, upon meeting the young Petit in France, she knew it was her destiny to cling to his. Their relationship, documented in lovingly intimate video footage from the early 70s, was a major benficiary of Petit’s boundless romanticism; for all his early obsession with sleight of hand and acrobatics, he was affectionate and emotionally generous. He never lacked confidence or ambition, but it took the support and love of his friends, and especially Annie, to push him to such literally great heights.

The rest of his conspiratorial crew includes a couple of male French friends, an Australian who witnessed Petit perform a similar, earlier walk on the Sydney Harbor Bridge, and a number of American confidants who seem all too willing to help the man’s seeming death wish come to fruition. Between the mustaches, wild hair, and admissions to years-long daily marijuana habits, the gang feels like a hippie-era relic (hazy footage of Petit and Co. frolicking in the French countryside verify as much), but the most dated aspect of their mission was the unbridled, unabashed idealism behind the endeavor. At the time, the newly built World Trade Center symbolized man’s greatest (or at least tallest) architectural achievement; Petit wasn’t just going for mere buffoonery, he was attempting, in his own words, to “dance on the top of the world.” He was inspired by what the towers represented at the time—a distinctly American form of exceptionalism and can-do spirit—and Man on Wire earns its subtle pathos through the unacknowledged (as if it needed to be) fate of those twin symbols in the intervening years.

Marsh approaches the WTC walk—affectionately dubbed “Le Coup” by the conspirators—with the cinematic equivalent of Petit’s joie de vivre: he juggles different styles and tones in a breathless filmmaking performance. His Carmen San Diego-style animations are too cute by half, but the black-and-white reenactments deftly borrow images from the silent film era, particularly German expressionism and, in one gorgeous nighttime shot, Georges Méliès’ “A Trip to the Moon.” It’s all intercut with a phenomenal soundtrack that includes both “Night on Disco Mountain” and Erik Satie, plus a number of works by Peter Greenaway collaborator Michael Nyman. For the interviews, Marsh even places the camera slightly closer to Petit’s face than everyone else’s, which makes his constant gesticulations and bulging facial expressions seem to leap slightly from the screen.

The film begins with the group sneaking into the towers on August 6, and then works backwards and forwards to simultaneously explain the history of Petit’s vision and the events of the stunt itself. All this visual and narrative motion makes the eventual first steps onto the wire—1350 feet off the ground and 200 feet long—that much more nail-bitingly transcendent. One interviewed team member is brought to tears just thinking of the day, while Annie’s eyes simply glaze over with remembered amazement. It is a moment that balances stunning beauty and human daring with constant life-threatening risk, and the image is more powerful for this combination.

As a movie scene, Petit’s walk recalls the work of Federico Fellini, who played constantly with images of men caught between worlds. The stunned crowd gathered underneath the Trade Center that August morning resembles the excited Romans who watch a Christ statue get helicoptered into the Vatican at the beginning of La Dolce Vita, and 8 ½ opens as its protagonist Guido Anselmi imagines himself floating above the earth, connected to humanity only by a thin tether. And of course the director of these movies, as well as La Strada and Variety Lights, would second Petit’s belief that a life spent entertaining others is one spent nobly.

Like Fellini’s many flawed protagonists, Petit can’t sustain the romance of his accomplishment through the film’s end. He is let go by New York police and heralded throughout the city, but his friends are deported immediately. He continues to bask in worldwide fame until it becomes clear to Annie that their lives are too different to sustain a relationship. Marsh waits until the end of the film to subtly reveal that the different interviewers are no longer intimate acquaintances, which casts all of their recollections in a bittersweet light; they witnessed and achieved something beautiful, but it also signaled the end of their most treasured friendships.

Filmed witnesses to Petit’s walk speak not only with amazement, but also with thanks; he gave people the opportunity to see something miraculous and unforgettable. Man on Wire explores the importance (and rareness) of this kind of human interaction, and in doing so Marsh offers us a cinematic experience that’s equally touching and rare.