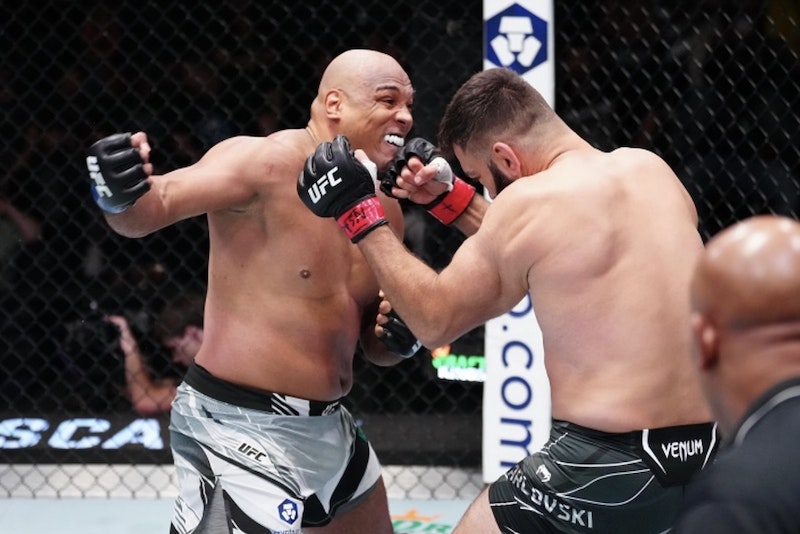 Andrei Arlovski’s four-fight winning streak is over. The 43-year-old fighter’s latest “gray streak” of questionable decision wins ended by submission at the heavy hands of Marcos Rogério de Lima, a light heavyweight swollen in early-middle age to 260 pounds. That’s how Arlovski lost just prior to the beginning of the streak, tapping out to a rear-naked choke from British prodigy Tom Aspinall.

In both instances, the aging heavyweight, faced with opposing fists too fast to feint and slip, settled instead for a quick night of work. The Aspinall takedown was fast and took him by surprise; Lima, a squat tank of a man, threw down the International Master of Sports in Sambo and slowly improved his position until he could apply the choke. At this stage in his career, Lima is a .500 fighter, able to overwhelm other old men like Ben Rothwell with punches but overmatched by real powerhouses on the order of Blagoy Ivanov and Alexander Romanov.

Not that it mattered. Andrei Arlovski, who still looked fit and spry at 43, decided to go home. The man with the most wins (23), fights (39), total fight time (6:11:41), and takedown defense success (88.4 percent) in UFC heavyweight history hit the ground and tapped out. He was done for the day and decades removed from applying something like the Achilles lock he used to wrest the UFC Heavyweight Championship from lumbering Tim Sylvia back in 2005 (Sylvia reclaimed the belt by kayoing Arlovski following his two successful defenses against nobodies, because knocking out “the Pitbull” is what his opponents did for a while).

It’s easy to write that someone “quit on a fight” after the fact, I suppose. Many writers demand that the fighter should be perfect in competition and proceed on the theory that he should be exempt from fear. Most of the people making these demands are timid and frightened in their personal lives, and witnessing how Arlovski fights now—seeming to accept submissions, fighting to avoid adding another spell in the darkness after a career full of them—has turned many observers into cruel judges of his behavior. His caution and cool-headedness under fire remind them of their own cowardice. These are the same people who move down the bar when a guy gets pushy. The same people who allow themselves to cross the street or walk in the gutter when a disheveled man approaches them late at night—and their excuse is they don’t want to give that man any trouble. They permit Uber drivers to address them with a bold insolence while simultaneously indicting them on Twitter. They might even be taking that Uber as they’re on the way home to write an article denouncing a man like Arlovski because he wasn’t brave according to the unwritten standards that they, not meat-headed casuals like yours truly, have established for his silly, low-paying bloodsport.

No other group in what passes for the world of sports journalism is as severe in the judgments of a man’s behavior as the MMA press and its diehard readers (an interchangeable lot; certainly they’re all paid about the same, i.e., nada). If they did it in a field of real consequence, they’d earn themselves a libel suit every time they pushed “publish.” The pulp literature of sports is devoted to sizing up someone like Arlovski’s capacity to endure pain and humiliation. On social media, the hacks argue about it endlessly. They’re cruel in appraisals and do it with the belligerence of people who are protected from physical danger. There are few who have compassion for the quitter, since so few have ever entered an arena, any arena. They make caution or hesitation in a man playing a boy’s game a crime against his sport. But they never know the truth and must forever doubt their own conceptions of what they see in people who use their bodies. Each person’s capacity for fear is different and forever a secret in them unless they’re tested. It’s impossible to investigate this in someone, because if they want to conceal it, there’s no way you can probe for the truth short of putting them in mortal danger. The psychologist is defeated when the subject lies about the terrors populating their mind.

What is asked of other athletes is trivial when you compare them with the professional fighter. Others seldom bleed. Their bones do not break. Lunacy isn’t the reward of too many close defeats. There’s no privacy for the cautious fighter. It’s preposterous to say a tennis player or a golfer is “game” and then use the same adjective when you’re describing a fighter.

Shrewd fighters sit in their corners and refuse to come out when they’re taking a licking, like when Aleksey Oleinik quit on Curtis Blaydes, who was too strong for him. There are those who appeal to the referee to save them. Recall Vadim Nemkov saving his Bellator Light Heavyweight Championship when Corey Anderson, who was beating him like a government mule, gifted him a no-contest by striking Nemkov a few times on the back of the noggin. Legitimate punches in the body make them complain they are being fouled. Sergei Kharitonov, another Russian notable amidst a race of wise quitters, has always been good at this, seizing upon any groin strike or eye poke as a reason to call it an evening and collect some percentage of his purse. Some go down and stay there when they can get up; Oleinik deciding to cover up on the ground against Derrick Lewis after failing to submit Lewis in the first round is a fine example of that. Such bad sports! The writers want these filthy animals to come up and take it until insensibility gives them a pardon. They’ll address the pain on the back end, when they’re writing laments to all the CTE, Parkinson’s disease, and so on. Dote and antidote.

Of all the fighters I’ve watched, Andrei Arlovski has been the most mindful of these competing demands. It’s his philosophy, earned during a career filled with bad losses, that a fighter must only go as far as his strength will take him. He has been knocked out 11 times and has a terrible knowledge of what a fighter should be. I’ll always remember him as the fighter with the most complete understanding of his profession. His short fight with Travis Browne, with both big men out on their feet at several points in that brief but epic brawl, was among the best fights I’ve ever seen and it doesn’t matter that Arlovski was a champion before or how long he held that championship or against what competition.

I’m not sure if people will write a lot about Arlovski in the years to come. His name and fame are slipping away. If they do, they’ll depend on memory and exaggerate what he was—either a cagey, ageless fighting savant or a champion turned tomato can. That doesn’t matter. Nor does it matter how many guys he “laid among the swee’peas” or how many also-rans like Lima and Jairzinho Rozenstruik did the same to him. If you only watched Arlovski turn on Browne’s black lights, you knew this was a champion like they used to be.