Misha Cirkunov came up short for the last time. 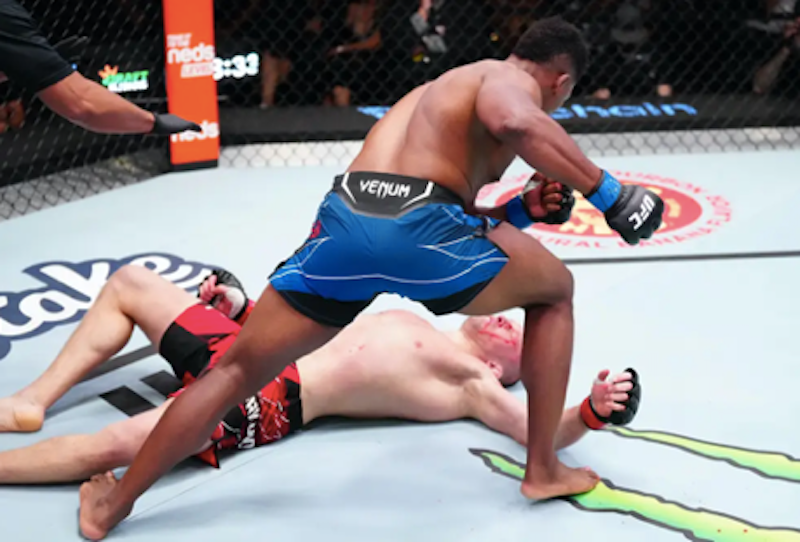 You’re Misha Cirkunov who always goes to the “land of dream” for your 15 minutes. Don’t let the UFC tempt you to fight a monster like Alonzo Menifield again. They might try. Look into the mirror every time they offer you $50,000 to show, $50,000 to win. Examine the scars and indents on your weathered face and try to recall the pain. Fighters who run short on dough become desperate. But you’re a conservative man, a Latvian-born son of the Canadian soil, and you should be able to get by. You’re 35, young in the game of life. Remember, no one’s older than a CTE-afflicted pug no matter what their age is.

You should’ve called it quits after you ended Jimmy Crute’s rise to stardom with a Peruvian necktie in the first round. That was as good as it would get for a tough guy who got started in the UFC by submitting Alex Nicholson (the QAnon-posting father of thirsty Instagrammer Hannah “24k” Goldy’s kiddo), Ion “Hulk” Cuțelaba, and Nikita Krylov like you were buttering bread. In fact, you didn’t merely submit Nicholson with a neck crank—you broke his jaw. “I’m impressed that I was able to break his jaw,” you said at the time, admiring your handiwork.

Then you started losing, and it’s never the same once you lose. Everyone who beat you during your first run at light heavyweight is a good fighter. Volkan Oezdemir, Glover Texeira, Johnny Walker, and Ryan Spann all turned on your black lights in the first round. After you debuted at middleweight, the fighters were middle of the road: Krzysztof Jotko stole a split-decision win that broke your heart and Wellington Turman stole a submission that broke your spirit. The Turman loss was a bad break. People could knock you out like flipping a switch, but you hadn’t been submitted in eight years.

By the time Alonzo Menifield pushed aside your attempts to clinch and then obliterated you with a barrage of punches, you weren’t triumphantly returning to light heavyweight—you were digging your own grave. Remember, it’s not only the years that do it to you. You leave it in gyms and tables where you eat too much or too little, cutting up and down. You hurt yourself as a fighter if you break the schedule of training. It’s never the same once the winning stops. Ask Patrick Cummins or Jimmy Crute what happened after you beat them. The UFC has always been trying to corner the Australian market, and I’m sure Dana White wept when you submitted Crute, same as when Ilir Latifidecisioned Aussie prospect Tyson Pedro. Grief doesn’t help the losing fighter, though, and neither does joy.

You must know, in the secrecy of your mind, where the skills went. Training starts to bore you. It happened to me with wrestling and powerlifting. It happens with everybody. That’s the beginning of the end. If you’re an athlete, you’re trapped in a prolonged Peter Pan boyhood. It’s a stupid racket for hungry and obscure kids. Originally, you’re goaded by pride and perhaps the ache of poverty. After that, you win a performance-of-the-night bonus or two and think you’ve reached the mountaintop. Why go on? Fighters who go on end up going blind. Strangler Lewis lost his sight from trachoma and relied on his wife to survive, dying penniless in Oklahoma at 75. Once upon a time, Lewis had been the pro wrestling champion of the world.

You’re a more fortunate man than Strangler Lewis. Your mind’s still quick, and your body’s lean and hard. You came and went in the dirtiest of all sports in this country. Hopefully, the filth didn’t contaminate you. The UFC has lots of overhead and can’t pay you what you’d be worth on the open market, but that open market couldn’t exist without the UFC creating the demand for it. In the final analysis, Dana White’s a promoter. One fighter’s like another to him. He rented your services. But White, who underwent a second puberty in his 50s and is now juiced to the gills, doesn’t hurt when a fighter does and neither does Mick Maynard, his matchmaker. They’re aliens to the sport that pays their bills.

You were clumsy against Menifield, who’s a superman with the heart of a lamb. Wellington Turman, who couldn’t beat the underachieving Andrew Sanchez or Karl Roberson, had your number. It slips away slowly. Your fights were always fast ones because you depended on deceit and leverage to snatch victory from the jaws of defeat, and when that didn’t work you got smoked. Some guys are that way. Shinya Aoki played that game much better than you, but he got lucky, too—the guys knocking him senseless when his best-laid plans went to hell were 50 pounds lighter than the bruisers with whom you traded blows.

You were a fun fighter to watch. You were awkward, and your clumsy style was probably why you put away so many guys who should’ve beaten you. You weren’t ashamed to disgrace yourself with a sloppy punch if it got you closer to a neck or a limb. You were never stylish per se, but you were a submission fighter as they used to be.

The payoffs to the fight game aren’t that big, and the hazards become immense with the passage of time. You might’ve received a light heavyweight title shot if a few things broke your way. As it is, the only thing that broke your way is Alex Nicholson’s jaw. But I suppose for a guy who lost so many brutal fights, you still look remarkably well.

Do you recognize yourself in the mirror when you get home from the fights? Are you still that kid who overcame the language barrier in Canada by throwing yourself into judo and amateur wrestling? All right, that’s over. You did what you started out to do. You went 6-7 in the UFC. No need to go out there and get whipped again. That’s the kind of thing that someone like “Smiling” Sam Alvey does, someone who’s content to lose for a living.

The cynic in me assumes you’ll be back. Perhaps those who know you understand better what your future holds. But as a guy whose gym business went under, you know that fast money can change hearts and minds if the price is right. And if Dana White or Bellator’s Scott Coker needs enhancement talent on short notice, they’ll make you promises. If all else fails, you can return to your roots and fight for red-headed Ramzan Kadyrov’s Absolute Championship Akhmat in Chechnya. As expatriates such as Jeff Monson or Tony Johnson can attest, ice-cold Russia has plenty of room for one more warm body.