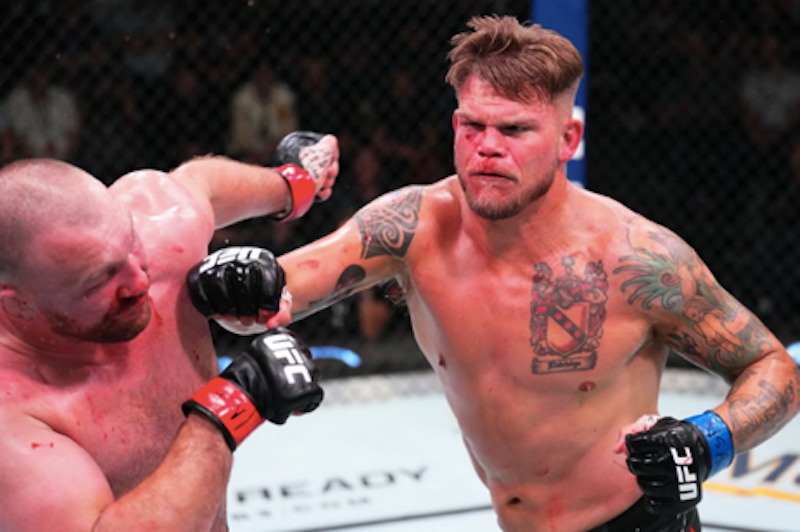 After 32-year-old Mississippi native Chase “the Vanilla Gorilla” Sherman knocked out 30-year-old Jared Vanderaa in the third round of last week’s UFC Fight Night event in Las Vegas, it raised Sherman’s record in the UFC to a dismal 4-9. His opponent Vanderaa’s record fell to 1-5, not counting his TKO victory over Harry Hunsucker on Dana White’s Contender Series to earn a spot in the UFC (despite the loss, Hunsucker ended up signing with the UFC anyway, going 0-2 across about two deer-in-the-headlights minutes of cage time).

These terrible records are par for the course in a division littered with obese men, elderly men, and one-dimensional fighters willing to take $15k to show and $15k to win. The fact that both Vanderaa and Sherman have dropped decisions to 43-year-old Andrei Arlovski, who held the UFC Heavyweight Championship back in 2005, comes as little surprise—nor does the fact that Arlovski is on something of a “gray streak,” winning his last four fights thanks to sound boxing and the questionable judging of Sal D’Amato.

Vanderaa, a lumbering oaf from the West Coast who gives charmingly lame-brained interviews, entered the Sherman fight having dropped a first-round scarf hold loss to 45-year-old submission specialist Alexey Oleynik in his last outing, the 60th win of Oleynik’s storied career (the Russian choked out his first foe back in 1996, when I was 14). Oleynik, like Arlovski, occupies a valuable place in the heavyweight hierarchy—he serves as a gatekeeper for the top tier of the division, finishing all the guys who can’t quickly punch out his lights. Eventually Sherman will have to fight him, either knocking him out—and likely getting a top-15 fight as a reward—or getting put to sleep and then released by the UFC for a third time.

That’s right—Chase Sherman, who looks to all the world like the illegitimate son of storied damage-eating heavyweight boxer Randall “Tex” Cobb, has already been released from the UFC on two prior occasions. The first came after a three-fight losing stretch in 2017 and 2018, during which he was knocked out by hirsute heavyweight mainstay Shamil Abdurakhimov and tubby slugger Augusto Sakai. He rebounded to beat three nobodies in Florida-based Island Fights Championship MMA, then in August 2019 claimed the BKFC Heavyweight Championship and Police Gazette Heavyweight American Championship at Bare Knuckle FC 7 in a convincing decision win over Arnold Adams in what was only his second bare knuckle boxing match. Three months later, he dropped that belt to fellow also-ran UFC alum Joey Beltran in a hard-fought, five-round scrap.

This was a curious sort of career resurgence, but it did prove that Sherman, a former Division II college football player at Delta State University, was still an athletic, relatively lean heavyweight who had good boxing technique. The UFC brought him back in May 2020, whereupon he destroyed the likable, sloppy-fat “Hurricane” Ike Villanueva—a CNC machinist by trade who has truly lost to everybody in the company, but has been kept around for ages because his fights always ended in knockouts, usually of him—before embarking on a three-fight losing streak.

That losing streak would spotlight a who’s who of subpar UFC heavyweights. The aforementioned Arlovski embarrassed Sherman on his feet after Sherman appeared to injure himself in the second round of their fight. Porcine Parker Porter, whose bulk belies the punishing pace he maintains, was mocked by Sherman via an amusing Instagram post, in which he captioned a photo of Porter with the line “two things I like are big tits and knockouts, and I’ll get both of them this week.” Sherman didn’t get the knockout—he got beaten pretty badly, with Porter scoring a takedown and outlanding his taller, fitter foe on the order of 149 significant strikes to 117.

Sherman was released from the company for a second time after submitting to a rear-naked choke from Jake Collier, an obese middleweight inflated to the heavyweight limit of 265 pounds, and eventually himself a victim of Andrei Arlovski’s head-scratching “gray streak.” Ever the company man, Sherman wasn’t gone long—he returned three months later when he agreed to a short-notice fight against bruising Moldovan wrestler Alexander Romanov. Romanov, who entered the fight not only undefeated (though his technical decision win over talented 40-year-old Canarian and Senegalese wrestling champion Juan Espino was controversial) but in the best shape of career, with rippling muscle replacing the layers of fat more characteristic of the typical UFC Baby-Huey heavyweight. He took Sherman to the ground and key-locked him like a child, the way Butterbean once casually key-locked the blimp-sized Zuluzinho in PRIDE.

But Sherman’s third chance wouldn’t end there. The “Vanilla Gorilla,” who’s surely kept around because he eagerly throws hands and is somewhat controversial and entertaining on the microphone, was given another fight against Jared Vanderaa. Vanderaa is an above-average but unspectacular fighter, somewhat talented in all areas of MMA yet lacking the skills to beat anyone outside of free-swinging heavyweight enhancement talents such as Justin Tafa and Harry Hunsucker. His losses to Oleynik, Arlovski, Alexander Romanov, and Sergey Spivak offered a clear sense of his ceiling—he could beat young fighters and fighters who lacked professional skills, but elite veterans had his number.

This would be an elimination match of sorts, with the winner likely to stay in the UFC and the loser headed for the dustbin of combat-sports history. For the first two rounds, both men fought with urgency. Sherman, a sharp albeit limited boxer, landed the much cleaner strikes, while Vanderaa absorbed them using his big block of a head and returned big, looping overhands that rocked Sherman and impressed the judges. When the third round began, Sherman was losing on the scorecards, yet his hand speed and combos won him the day after a punch rocked Vanderaa. This enabled Sherman to pounce on the bigger man, unleashing a torrent of blows that forced the referee to stop the fight.

During the post-fight interview, Sherman displayed an unusual degree of humility from a man whose social media presence once consisted of equal parts opponent-baiting, 2020 election fraud speculation, and COVID vaccine skepticism. “To be honest with you, I’ve been in the UFC for 13 fights and I ain’t done shit yet,” he opined. “With all due respect, I’ve got to get off this microphone and get back to work. Next time I do something, you can put it in my face."

He elaborated on this statement at the post-fight news conference, remarking that “it’s the thing behind my ears that’s been holding me back because there are very few heavyweights who are as athletic as I am.” Strange as that claim sounds, Sherman’s probably correct. Fellow heavyweights Parker Porter, Jared Vanderaa, and Robert Collier played high school sports, but not at an especially high level. Oleynik and Arlovski were elite athletes in their day, but they’re now in their 40s. All of the younger fighters with strong amateur or professional credentials outside of MMA, such as Curtis Blaydes and Alexander Romanov in wrestling, Ciryl Gane in kickboxing, and Tai Tuivasa in boxing are clustered around the top of the division. Division mainstays such as knockout king Derrick “the Black Beast” Lewis and chubby ex-Philadelphia police officer Chris Daukaus, by contrast, are merely big boys throwing hands—par for the course in a division that has, over the decades, been comprised mainly of fighters of this ilk.

Whether Sherman can do anything with that athleticism remains an open question. He probably can’t stand and trades with the likes of Lewis and Tuivasa, and wrestlers such as Alexander Romanov and Juan Espino will take him down and submit him with ease. He’s not old by the standards of the heavyweight division, a mere 32 at a time when the average age of a fighter in the top-15 rankings is 35—but he might be too old to significantly improve his grappling and takedown defense.

Then again, who can say for sure? Sherman looked in better shape in the Vanderaa fight than he had been in years, entering the third round fresh as a daisy for perhaps the first time in his entire career. Stranger things than a Sherman run to the top of the rankings have happened, and a sport as benighted, underfunded, and unpredictable as MMA demonstrates each week that nobody—not even seasoned fighters and veteran analysts—really knows a thing.