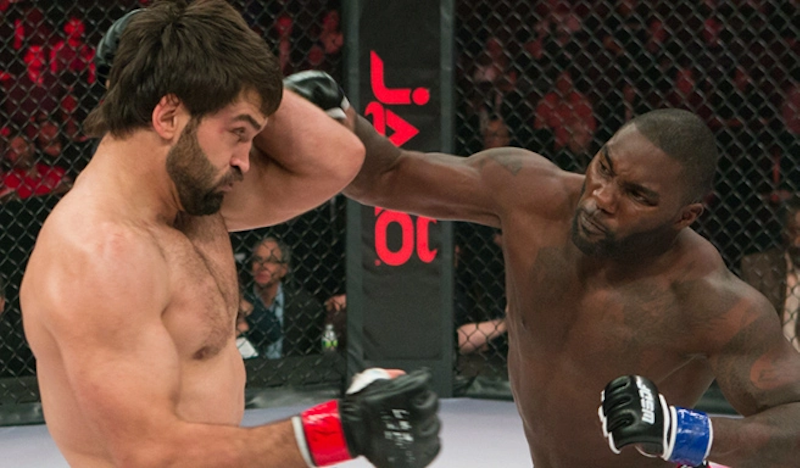 It was all wrong for Anthony “Rumble” Johnson, the welterweight-turned-light heavyweight mixed martial artist who died last week after an extended bout with non-Hodgkin’s lymphoma and a rare condition called hemophagocytic lymphohistiocytosis. The latter is one you don’t want to read about. In any case he was only 38. Johnson’s luck was bad right up to the end.

In his last fight, against heavy-handed José Augusto at Bellator 258 in May 2021, he took a licking in the first round and then put Augusto down in the second. Nothing was working for him in that fight except his heavy hands, which were close to being heavyweight hands in a 205-pound body. It’d been four years since the fight before this one, a light heavyweight title challenge against Daniel Cormier he lost by submission. From May 2012 up to his victory over Augusto in 2021, Johnson went 13-2. Both losses were to Cormier, a great wrestler and strategist. Both losses came by rear-naked choke. He hurt Cormier in each fight, not an easy thing to do. My, how sad he looked when he lost.

At his best, Johnson would’ve lost by rear-naked choke to Cormier a million times out of a million, yet beaten everyone else. Future champions such as Bellator champ-champ Ryan Bader and UFC light heavyweight title-holder Glover Teixeira went down like nothing before him. So did top contenders like Jimi Manuwa and Alexander Gustafsson, who almost beat Cormier and light heavyweight GOAT Jon Jones.

During this span, only Phil Davis, that savvy Penn State wrestler who’s never been finished once in his decade-long career, and Andrei Arlovski, a heavyweight who’s eaten the biggest shots from the realest ones, took Johnson to the final bell—and both lost to him. Arlovski’s fight wasn’t completely one-sided, and instead of eulogizing Johnson, he appeared to damn Rumble with faint, ungrammatical praise: “Fought ones [once]!!! I lost that fight, cause referee bastard fell asleep on the clock as a result—my jaw was broken in two places… we fought all three rounds!!! Never didn’t know him well…”

Arlovski was referring to a punch thrown after the bell following the first round of their World Series of Fighting 2 match in 2013, when he and Johnson were fighting outside the UFC in the hope of eventually resigning with that organization. Watch the fight now, though, and the result is clear: they traded heavy shots in the first round, but Johnson—who’d left the UFC as an oversized 170-pounder who sometimes failed to even make the middleweight limit of 185 pounds—controlled Andre in the clinch and displayed the skills that made him a junior college national champion wrestler when he took Arlovski down in the second round. But Johnson couldn’t knock out one of the most cold-cocked men in MMA history—Arlovski has been “laid among the swee’peas” 11 times—and it makes you wonder how his prodigious power would have translated in the land of giants. He hit plenty hard at 205 pounds, though; the various rising stars and top contenders he derailed could all attest to that.

But back to it. Johnson looked sad in that Augusto fight, too. It was like he knew the jig was up. The last seconds were ticking away in the fight game, and he’d missed the hall of greatness by a couple winging punches that failed to hit Daniel Cormier square on the chin. Too bad for Johnson that the great champions come only one at a time, and he wasn’t one of them.

It became popular to talk about Johnson as a man who couldn’t fight much. This is slanderously inaccurate. He had all the punches, good hand speed, solid basic wrestling, and an efficient style that finally began to click after he settled at light heavyweight. If he could have kept his conditioning at 170 pounds, like when he decisioned a still-dangerous Dan Hardy and kicked Charlie Brenneman’s head into the stratosphere, he might’ve been spectacular. There was no one out there who looked like him at 170 pounds, and for good reason. Vitor Belfort rear-naked choked him out at middleweight and the strong folkstyle wrestler Josh Koscheck, a national champion at Edinboro University, hadn’t yet fallen in love with his hands and did the same at welterweight (actually at a 176-pound catchweight, because Johnson, true to form, missed weight). For all his wrestling ability, Johnson was often powerless against the world-class mat technicians. There were and are levels to this game.

Johnson had a lot of problems outside the cage. He was thrice charged with domestic battery—in 2008, 2014, and 2019—and convicted the first of those times. He had problems all throughout his career with anger because he couldn’t leave it at the gym. In recent years, he’d taken to peddling CBD oil, the nostrum of choice for washed-up fighters prone to anxiety or temper tantrums, and maybe it mellowed him out. Nobody can know whether that was true save Johnson and his god.

What really cost Johnson was that he never got to fight Jon Jones. Jones, another former national junior college wrestling champion whose victory came two weight classes up from Johnson’s, had his own problems and missed a lot of time in the cage. He also missed out on fighting Johnson, which meant both men squandered their respective primes repeatedly fighting a pudgy, middle-aged Daniel Cormier. Jones couldn’t lose to him, even taking down the former Olympian, and Johnson couldn’t beat him. But could Johnson have beaten Jones? Nobody who fought Jones outside of perhaps Thiago Santos, who was crippled after the first round due to a leg injury, had anything in the way of real power. Jones fought undersized guys like Chael Sonnen and patty-cake, point-fighting scarecrows like Dominick Reyes. Maybe Johnson would’ve taken Jones’ real zero—that disqualification loss to hapless Matt Hamill as a result of silly illegal elbows doesn't count—if he landed a lucky punch. But Johnson’s luck was mostly bad and it stayed bad.

If Johnson had hung around too long, somebody would’ve laid him out. Augusto wasn’t it, chief, but late-career Yoel Romero, now ballooned to 205 pounds of improbable muscle, probably would’ve done the trick. They were supposed to fight at Bellator 258—an encounter I awaited with bated breath—but Yoel failed his medicals with some sort of eye issue.

Toward the end of his life, Johnson began posting cryptic messages about his health on social media. You never know what’s what on “the ‘gram,” but something was clearly amiss. How right that was. After he died, the usual locust swarm of amateur scientists descended on his profiles to attribute his death to the Covid vaccine, the so-called “clot shot,” as is now the custom with all athlete deaths and even injuries.

What’s the consensus on his career? Johnson knew how to fight, yet his skills weren’t appreciated outside of the highlight reels, which is to his credit because that’s all the casual fans usually watch. He made lots of highlight reels and collected lots of performance bonuses. What happened with Cormier is unfairly held against him. Outside of Magomed Ankalaev, there isn’t an active light heavyweight who would be better than even money to beat him were he in his prime.

The obit business isn’t kind. I tried to sell a much longer version of this story to a mainstream publication, and—unlike the wrestlers I lay to rest for them “on the regular”—they told me that dear, departed Rumble Johnson wasn’t a big enough name to warrant the star treatment. They were right. Yet it was still a tiny tragedy, something you could fit in your pocket like my dad’s dog-eared college copy of Tropic of Cancer, watching what was left of Johnson during the Augusto fight. He was never a champion, great or otherwise. But it made a lot of people, myself included, feel good when he won. It didn’t matter what happened with Augusto in that bleak first round; Johnson still came back and won. But it was all over for him after that. His future was full of pain and sorrow until he died a few days ago. I’ll miss him, as will a bunch of others who watched him bleed for what fame he had.