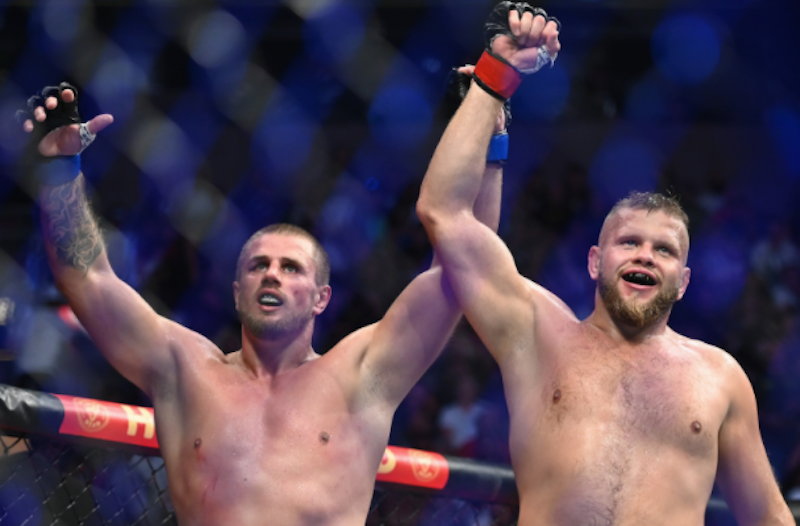 UFC 278 culminated with a pair of legendary bouts—Leon Edwards finishing would-be welterweight GOAT Kamaru Usman with a head kick and retiring middleweight Luke Rockhold ensuring that Paulo Costa bathed in the blood from Rockhold’s busted nose—but veteran MMA journalist Jonathan Snowden has already written the definitive account of those matches for his Substack. As people know, I don’t watch these spectacles for the main and co-main events; I watch them for the heavyweights.

A heavyweight fight is a thing of beauty, the fight “of which no greater can be conceived,” as St. Anselm (though the continued if infrequent recrudescence of super heavyweight fights featuring the likes of Aorigele might give him pause). 36-year-old Polish veteran Marcin Tybura, an all-rounder who’s about as close to an NPC or default “create-a-heavyweight” as the UFC has on the roster, finally clashed with 31-year-old Alexander “King Kong” Romanov, a Molodovan Greco-Roman wrestler and sumo veteran whose recent 40-pound weight loss has rendered that moniker about as fitting as his old ring shorts.

Tybura, like Neil Magny at welterweight, is a prototypical “lower half of the top 10” guy, a skilled performer who can beat anyone if given time to implement his game plan but can also lose to anyone when overwhelmed by superior athleticism (as Magny recently was by rising Kazah star Shavkat Rakhmonov, who switched him off like a lamp). After a puzzling 1-4 stretch from 2017 to 2019 in which Tybura was knocked out in three of those losses, he rebounded to win five fights in a row, including impressive knockouts of Greg Hardy and Walt Harris, before dropping a boring, one-sided decision to Alexander Volkov at UFC 267. Harris and Hardy seemed like major victories at the time, though Harris’ cardiovascular and grappling weaknesses are widely known and ex-NFL star Hardy was bad enough and cut from the UFC despite his big name. Tybura also defeated skilled heavies such as Serghei Spivac, Maxim Grishin, and the always-dangerous Ben Rothwell in a match in Abu Dhabi that featured absurd levels of patty-cake volume from both men. The Spivac victory loomed large in advance of the Romanov fight, because Spivac has continued to rack up wins over ranked foes and his style is similar to his Moldovan countryman’s: slow, powerful punches that complement punishing wrestling and grappling. Tybura, who can do a bit of everything, kept the fight standing against Spivac and won a unanimous decision.

Romanov, by contrast with the steady Tybura, entered the UFC to considerable hype. His first fight was supposed to have been against the Polish veteran, which speaks to the company’s confidence in him, but that bout didn’t materialize and he instead spent the better part of the past two years finishing lower-level fighters such as the blubbery Roque Martinez, the wrestling-averse Chase Sherman, and the lumbering Jared Vanderaa. His most impressive win came against Marcos Rogério de Lima, a light heavyweight who had plumped up to heavyweight and thereafter enjoyed a hot-and-cold run in the UFC highlighted by a furious first-round stoppage of Ben Rothwell; Romanov finished him with a forearm choke, a rarely-seen submission in modern MMA.

In his least impressive win, Romanov—then in his stockier 265-pound “King Kong” incarnation—ran out of gas against Juan Espino, a 40-year-old The Ultimate Fighter winner with extraordinary skills in grappling, Sambo, Celtic wrestling, Leon wrestling, Gouren (Breton wrestling), Lucha Lamb (Senegalese wrestling), and goodness knows what else. Espino, who once weighed upwards of 300 pounds, had dropped to a svelte 255 by this point, and his improved conditioning allowed him to turn the tide against Romanov in rounds 2 and 3—only to be halted in the midst of what seemed like certain victory when a knee to Romanov’s groin sent the fight to the scorecards. Romanov, who excels in the first round and stalls thereafter, seized on this gift, telling officials that he couldn’t continue—probably a sincere declaration given the way he was sucking wind. The decision was baffling, but it exposed an obvious weakness in Romanov’s game that the UFC would always try to avoid talking about it as it continued to build yet another undefeated prospect (31 in heavyweight years is akin to 21 in flyweight or 25 in welterweight).

This fight followed a similar script to the Espino bout, albeit with a more extreme first round for Romanov. The slimmed-down “King Kong,” sporting the abdominal muscles-on-potbelly look of many a deflated heavyweight, landed two powerful slams and outstruck Tybura 14-0 on significant strikes and 64-1 on strikes. The degree of dominance seemed to call for a 10-8 round in Romanov’s favor, but only judge Derek Cleary scored the round that way. Michael Bell and the notoriously off-base Sal D’Amato scored the round a 10-9, and Tybura entered the second round with a second wind. Romanov, meanwhile, was starting to run out of breath; even in his leaner state, his mouth hung open and his hands kept falling to his hips.

Rounds two and three followed Tybura’s preferred script. He peppered Romanov—the smaller and even slightly less muscular man, oddly enough—with jabs and straights, kept his distance (he has a 3” reach advantage), and stuffed takedowns that no longer had much force behind them, easily winning both rounds in the process. When the decision was announced, Tybura claimed a majority decision, with only Cleary having the fight as a 28-28 draw. Most of the media echoed Cleary’s score, but such is life—most of the media also had the Espino fight going to “El Guapo.”

Tybura has added another notch to a long belt, with 10 wins in the heavyweight decision, but who’s he to fight next? I suppose they could pit Tybura against the fast-declining kickboxer Jairzinho Rozenstruik and see if he can eke out a careful decision victory, but is that something that moves the needle? Perhaps it doesn’t matter; Tybura surely knows he will never be a champion, merely a “hall of very good” performer who beats seven out of 10 guys put in front of him and cashes his modest paychecks. Those American dollars go further in Poland, no doubt, even with recent hyperinflation and former light heavyweight champion Jan Błachowicz—a man who looks larger at 205 than training partner Tybura does at heavyweight—occupying most of what MMA spotlight exists in the country.

Romanov lost about as much as Tybura gained. He’s still an interesting prospect, even if his conditioning issues, exacerbated here by Salt Lake City’s altitude, remains puzzling (what’s more puzzling still is how suspiciously jacked the pre-UFC Romanov was—has steroid “gas” given way to softer mass?). He can wrestle with anyone, and his victories are fun to watch—he’s got the raw strength to finish an undermatched opponent with a forearm choke, for crying out loud. The best test for him might be a smaller man with fast hands, someone on a downward trajectory; fish-bellied former Philly policeman Chris Daukaus, rudely expelled from the heavyweight division’s top ranks by flurry of punches from Derrick Lewis, also needs a win, and he might as well test his boxing and jiu-jitsu against Romanov’s overwhelming first-round force.

Romanov-Tybura wasn’t a heavyweight fight for the ages, but how many could be? Not everything is as shambolically epic as striker Igor Vovchanchyn overcoming enormous 300-pound wrestler Dan Bobish; few things in modern MMA could ever hope to be that stupidly entertaining (the Costa-Rockhold co-main event, though, did come close). Sometimes you just have to win and advance—that’s the life of a journeyman like Tybura, emphasis on the journey rather than the destination, which for him, like for most of us, will be retirement and then the peace of the grave. He fights the men he’s asked to fight; not so much “Polish Power” like Błachowicz—how powerful has Poland been since the breakup of the Polish-Lithuanian Commonwealth, anyway?—but the far more fitting “Polish Persistence,” the inexterminable big guy who shows up and does the work, for what it’s worth.