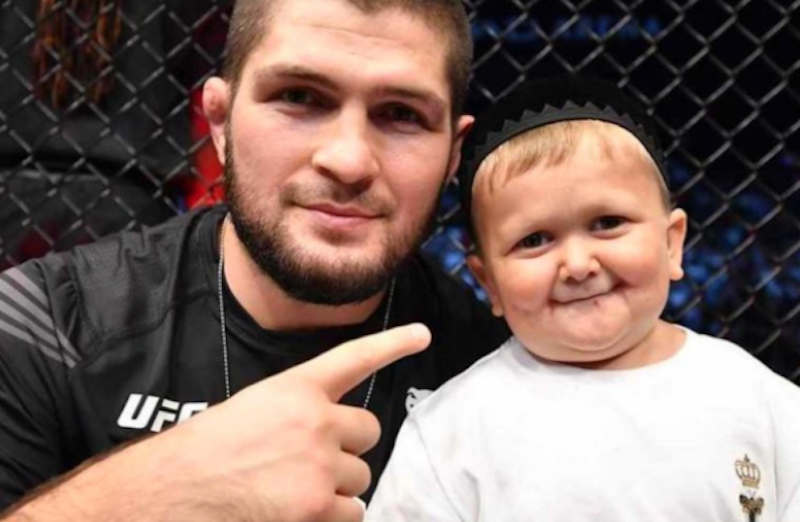 Nothing makes sense when it comes to Hasbulla Magomedov, a 3’4” twentysomething who’s undoubtedly Dagestan’s greatest social media star and perhaps its greatest celebrity even when accounting for all of its top-notch wrestlers and mixed martial artists. But I’ll still give making sense of Hasbulla the old college try. I’m a credentialed historian and can tell you all about “General Tom Thumb,” actually a 3’4” man named Charles Stratton (1838-1883) who was adopted, trained, and employed by circus impresario P.T. Barnum. Stratton, who could dance and sing, wasn’t relegated to the sideshows, amidst the “freaks” and “geeks,” but rather was a respected working actor whose 1863 marriage to 2’8” Lavinia Warren made national news.

Charles Stratton was a big deal in much the same way Hasbulla is, and for similar reasons. Dagestan, a republic of Russia situated in the North Caucasus along the Caspian Sea, is a mountainous land home to three million hardy souls—83 percent of whom are Sunni Muslims and a good many of whom, including their numerous representatives in the world’s premier mixed martial arts organizations, sport impressive neckbeards. To the west, Dagestan is bordered by the Chechen Republic, headed since 2018 by neckbearded MMA fanatic (and U.S.-

Only in this harsh region, scarred by conflicts with imperial Russia and its neighbors, could someone like Hasbulla hope to emerge in 2020. This isn’t a land already despoiled by pint-sized performers ranging from Wee Man to Hornswoggle; it remains a culturally naive place, a place where “refinement culture” has yet to render the merely diminutive and somewhat cherubic baby man a matter of cinematic fact. Hasbulla now boasts 3.5 million Instagram followers on his three-year-old account, because how could he not?

The feats of Hasbulla are akin to the feats of Charles Stratton—the silly little man being silly in clever ways—reworked for the world of Web3. You can buy Hasbulla NFTs, which are essential to his “brand,” because of course you can. You can also buy a sweet Hasbulla hoodie from his store, which I just did on account of needing to reinvest my profits from this article. You can sign Hasbulla to a five-year personal services deal, which UFC president Dana White did this week and which is, all things considered equally, a genius business move given that Hasbulla’s reach in the Russian/Caucasian market, particularly the Muslim market, exceeds the reach of any other performer on White’s roster. You can probably even sign him to the WWE, if you’re looking to juice those cash-cow Saudi Arabian shows a bit more (perhaps it could be timed so that the devout Hasbulla could take his pilgrimage to Mecca).

Hasbulla’s social media game, which far outstrips the social media games of MMA “hot girls” such as Paige Van Zant (3.2 million followers), Mackenzie Dern (one million followers), and the extremely thirsty Hannah “24K” Goldy (168,000 followers), consists primarily of him cavorting in the manner of a pugnacious baby man. He poses with MMA fighters he likes, throws shade at Conor McGregor and others he dislikes, and sits in luxury automobiles. The one thing he doesn’t do is pose in pictures with women, because Hasbulla, baby-man cuteness aside, is a person of strong religious faith.

This presents an interesting quandary as UFC 280, which will be held on October 22 in Abu Dhabi, draws near. Previous Abu Dhabi cards have utilized the UFC’s team of ring girls—a rather outdated convention in 2022, though one that Barstool Sports founder’s Dave Portnoy has certainly leaned into with his amateurs-only Rough n’ Rowdy toughman boxing events. But previous cards have not had Hasbulla hanging out in the corner of lightweight GOAT Khabib Nurmagomedov’s protege Islam Makachev. Hasbulla can avert his eyes when Chrissy Blair or Arianne Celeste stroll by toting cards with the number of the upcoming round on them, but should a star of his magnitude be subjected to this indignity? Hasbulla, as much a part of Caucasian sporting excellence as Vladimir Putin and Ramzan Kadyrov, is here for the long haul; is he to endure four more years of such arrant immodesty?

Hasbulla’s presence should reassure Makachev and Khabib—winning or losing now pales in comparison to simply holding this little influencer aloft throughout fight weight. Charles Oliveira is a skilled and ever-improving fighter with an inspiring favelas-to-riches story, but anything he could say or do would be immediately “clouted out” by Hasbulla posting a video of himself pretending to fight a chicken or struggling to use a toilet plunger. The UFC has already released a line of Hasbulla-branded merchandise distinct from what can be found in the influencer’s store, something the company has yet to do for many of their incredibly talented Dagestani fighters (#4-ranked light heavyweight Magomed Ankalaev, a destroyer of worlds, is nowhere to be seen unless people can be convinced that it’s him rather than lookalike Abe Lincoln on the five-dollar bill).

I thought I’d write about the fights this week, as I do every week, but a mere fight between two aging fat guys or two musclebound former college wrestlers is small potatoes when measured against the enormity of Hasbulla. Here he stands, larger than life; he can do no other. This is the fate of Hasbulla, for good or ill: MMA mascot for part of the developing world, serving as an essential stage in their cultural development only a few rungs below a seemingly endless slew of green-screen Marvel movies and whatever is going on with Lizzo.