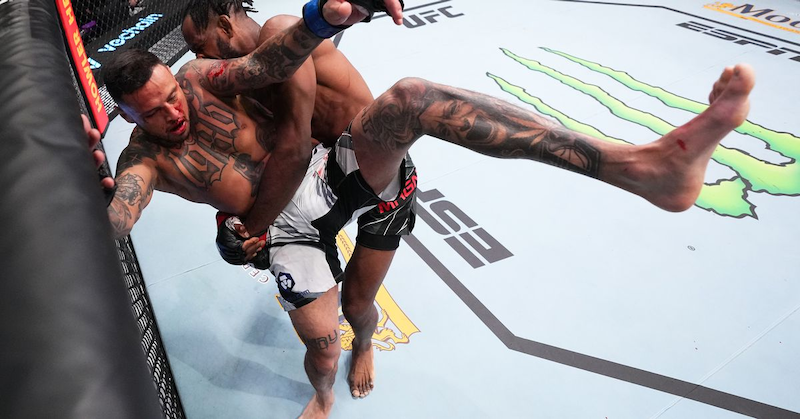 Someone should tell Neil Magny, that rangy scarecrow of a welterweight journeyman, what he is in his kind of music. Most of that music is laid away with the ragtime professors in the slums of graveyards where the weeds grow tall as rich people’s stones. The music just faded away, syncopated and echoless in the roaring storm of rock ‘n’ roll and everything thereafter. Those old piano players were scufflers themselves, off-key either because it suited them or because the equipment didn’t. They made bittersweet music with what they had and what they had not, much like how Magny awkwardly loped about for two rounds before throwing Daniel Rodriguez to the canvas and cinching in a D’arce choke as the tattooed ex-con tried to return to his feet.

Those speakeasy entertainers called out the tragedies of the night and explained its small victories in the same sad style, as if all the playing cards were marked and no one could believe a hole card until the last hand was run. Perhaps if they still were around to define Neil Magny, they might get it exactly right because his fighting career is one for everybody who’s been imprisoned in the solitude of obscurity.

The old piano players, singing those metropolitan lullabies to strays and losers, carrying everybody’s torch for their own, would also find an anthem for ink-saturated Daniel Rodriguez, the reigning champion of the tattoo parlors and hockshops. The important composers wouldn’t be simple enough for these two men and the story of their fight. They would allow their craft to dominate them and mislay it in the techniques of their form. The long-ago tunes of anguish are gone, as the cribs in which they played are gone, as the old piano players certainly are. But if they could revive them and sit their zonbis—mythological undead corporeal revenants from Magny’s ancestral homeland of Haiti—I’m sure they could handle this fight with a song.

I’m not the blockhead to tell it because it shouldn’t be played on a keyboard, even the nice Corsair mechanical keyboard I use to pound out my content, the one so loud my wife can hear it upstairs when I’m really humming. The violins certainly shouldn’t be in on it, and it doesn’t need horns or a drummer banging away at his “Moby Dick” solo until the sticks bust. It’s not a musical theater ditty for the likes of Nathan Lane or some trippy EDM festival number. Neil Magny, from the gridiron at Southern Illinois University Edwardsville to the military to the Octagon, and Daniel Rodriguez, from one holding pen to another, followed the hard way to the UFC Apex last week. It has to be an old ragtime professor or it’ll be no one at all.

They’d get it in, all right, the whole package of it, all the pain and all the dirty deuces in all the bottom-dealt decks across Magny’s record 20 welterweight wins, none of which led to a title fight. The tall, awkward all-rounder with the 80” reach has a tragic knack for missing happiness by a few minutes at some appointed destination. The old piano players wouldn’t fade anyone with epics about statesmen or girl-bossers, or those Broadway jingles about “Aaron Burr, sir” and the rainbow that comes after every shower when you’re living, laughing, and loving. They played the songs as hard men like Daniel Rodriguez knew them and how luck maimed them or the law tripped them or how they were hooked on junk or gambling. They would get in Magny’s Haiti and the Dominican Republic and Rodriguez’s Los Angeles because those no-luck places appealed to the amateur historians of fight nights who sang their concerts to no-luck guys who could understand the songs.

When you watched Neil Magny in the third round of that fight, it was plain that this was a great fighter. He was always getting in his small touches until he could seize his moments, like when he big-dogged the once-formidable Robbie Lawler for three rounds—even Olympian Ben Askren couldn’t do that—or stopped Olympic judoka Héctor Lombard dead in his tracks in the third round after Lombard, fresh off a PED suspension, had nearly “laid him among the swee’peas” in the first. Even when Magny lost, and he’d sometimes lose as improbably as he won, he was learning his trade and being paid for it, an apprenticeship that has extended into his 30s.

But his reputation as a gatekeeper has swindled Neil Magny out of many rewards. He knows too much about fighting to be trusted with the guys who Dana White is building. The smart fighters duck him and run out on him. There have been some fine scores along the way, but Shavkat Rakhmonov was too much for him, handled him as if he were a baby. Shavkat is a generational talent, though, and he’d beat almost anyone going up a weight division or two. The good welterweights toward the top of the rankings just hide, and instead he gets tough fight after tough fight, always fighters on the rise like Geoff Neal and Max Griffin, and sets them down in turn. He’s growing old on the road—the first fighter I’ve seen with a receding hairline and cornrows—but he’ll fight anywhere, once winning five times in a calendar year, and will do so until he runs out of opponents.

All the while, Neil Magny has known he was a great fighter and surely held on to that. Punks like Colby Covington got to chill with Donald Trump while Magny, a skeletal 6’3” when he cuts to 170—something of a zonbi himself—keeps tipping over barrel-shaped men like Daniel Rodriguez for money.  Counting the $50,000 performance bonus, he made $275,000 for this fight, but there are preliminary boxers on Tyson Fury and "Canelo" Álvarez cards making that kind of money. “Platinum” Mike Perry throwing bare hands in the BKFC is making that kind of money and then some. The old piano players would know all about this injustice.

They’d sing the late-coming happiness in there, too, beating ex-champs and interim champs like Lawler, Johnny Hendricks, and Carlos Condit, getting these main event and co-main event slots in what would be the 35-year-old senility of many a welterweight’s career. They’d really dig in on that hot day’s work in Las Vegas last week when he was pushed around for two rounds, then got off his stool in the third to send Daniel Rodriguez home a few minutes early.