An ode to those who show up and do the job. 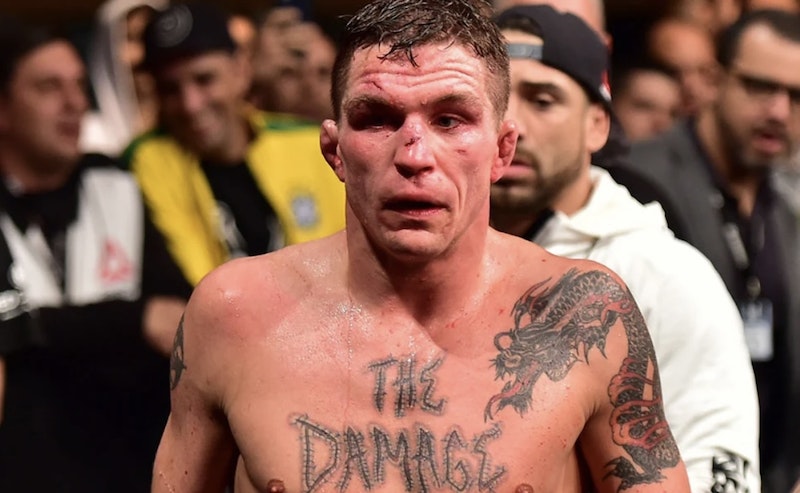 The preliminary fighter on a typical UFC card works 30 hours a week at a gym and maybe spends another 20 on Instagram. He fights three times a year if he’s lucky and clears $100,000 if he’s good. But he thinks of himself as a cage fighter and that’s how he describes himself when asked about his occupation. He trains constantly in the evening and posts photos of those workouts to social media to drive engagement or something. It doesn’t. He tries to get up at six in the morning to do his road work, but he usually doesn’t. He lives alone in some rat hole of an apartment near the gym and recently was jilted by some CrossFit Games girl who left him for a fitness influencer who can get the real endorsements.

The preliminary fighter tells his friends he’ll quit everything as soon as he gets on the main cards. He knows it’s a lie, but he thinks it’s a disgrace that he has to hold a regular job because his work as a fighter doesn’t afford him a life of leisure. He enjoys the gym and will grapple on the mats all the livelong day. He hangs around the place after he’s through with training to watch the other boys and men work out. He’s proud of being a fighter and thinks this makes him a spectacular man, someone who sees more and further than other men. He doesn’t dissipate but instead reveres his muscular body; it’s both temple and tomb.

He’s easily offended when people don’t recognize his name. He has never even had a feature about him published on one of the clickbait MMA websites. In fact, he has never shown up anywhere outside of the UFC website. He has never appeared on regular cable, only ESPN+ streaming. He has a Sherdog fight results page, not a Wikipedia page. In the old days of print media, the results of his fights would’ve been carried in agate type after the descriptions of the main events he supports. Today, they’re buried on the parts of ESPN.com where nobody bothers to scroll. He believes the reason he gets no publicity is because the blue-check journalists are a bunch of vaccinated sissies.

Once he was in an emergency main card fight, the first fight of the night. He was primed to fight, even though he took the bout on short notice, but instead ended up sitting in the locker room when his opponent got sick during warm-ups. That was one of the best nights of his career. On the worst nights of his career, which are many, he gets beaten badly but always manages to go the distance. He was a wrestler in high school and knows how to stretch things out. He’s a 3-round, 15-minute kind of guy, typically losing 29-28 on two scorecards and 30-27 on the other.

The preliminary fighter has been working at this honest trade for 12 years and is growing old in it. He dreams of earning six figures in a single night but has never gotten close to that. He’snever been knocked out and is understood to be a durable, game fighter with little skill. What skill he has reflects the state of MMA in 2012, when he debuted on the regional circuit. He fights with a wild gladness and punches wildly when he’s not clinching and dirty boxing. He seldom knocks anyone out. Fighters with speed cut him up with jabs—he’s one of those early 2010s zombie fighters who never bothered to learn how to defend the jab—and he gets work whenever a rising star needs experience. He isn’t considered dangerous, but his stamina and competitive fury give an opponent a good evening’s work and his thin, easily-pierced skin impresses the crowd with a bloody fight even when it’s a boring one.

His nose is flattened and there are scars along the edges of his eyes. The left brow is disfigured by the bald slash of a healed cut. He talks thickly, as if his tongue is swollen, but his mind hasn’t yet been impaired. He has never become accustomed to losing. He’s depressed when he’s beaten and weeps afterwards. Once he broke the knuckle on his right hand when he hit the shower stall. He doesn’t believe he has ever been beaten cleanly. He considers the judges who vote against him to be dishonest. He dislikes the new scoring system, which prioritizes damage above everything else and hurts him because he bleeds so easily and always looks damaged. He’s positive that top guys in the company, many of whom beat him on the way up, have mysterious political connections. He uses the word pull a lot. He has won as many fights as he has lost, which is why the UFC hasn’t cut him yet. He likes to say he’s a 50/50 bet, just like the lottery—either you win or you lose. The guys he beats are like him but worse.

He was never a prospect. He fought a lot in school when he was a kid. He joined a Brazilian jiu-jitsu gym in a strip mall in a nothing place like Portage, Indiana and started winning local tournaments. Soon he was getting regional fights. He won his first pro fight and knew an ecstasy that has never been duplicated. He believed that a famous promoter would come to the dressing room and give him an immense bonus to sign a contract. When no one appeared, he went home to his parents’ basement.

The preliminary fighter finally left home after he racked up back-to-back professional wins, which took a few years. He eventually got to the UFC after stints in the LFA and Bellator. He won his first UFC fight, too. He returned to his ho-hum Hoosier hometown and hung out with some old friends. He was amazed that they weren’t impressed by him. He remembered Pat Miletich, the first UFC welterweight champion, who’d been a Midwestern fighter they all admired. But his friends paid no attention to his stories about fighting. He’d told them all who he was fighting—a small-name guy on the way out of the UFC—and the only one who showed up was an old wrestling teammate who worked in his corner as a favor. He moved from his original rat hole apartment to one closer to the gym the next day.

He took the job at the gym coaching MMA when his parents refused to lend him any more money. He owes mom and dad about $40,000. It’s a debt that will never be paid although they’re supposedly taking it out of his purses in installments. But the preliminary fighter is a gifted actor when it comes to playing the part of a good son, so his folks never receive their fair share.

Once he thought he’d drive a sports car and live in a penthouse. He was going to be a champion and make the girls in high school sorry they’d ignored him. Now and then he wonders why it never happened. He talks about breaks, but he isn’t specific. Good breaks? Bad ones? He’s had a few. He still gets a kick out of carrying his bag on the way to the fight. He thinks everyone knows who he is and where he’s going. No one cares, and he’ssick in obscurity. But he will fight in the preliminaries as long as he can. He’s a fighter like they used to be.