The Week in Fights #1

In the first of a new series, Oliver Bateman reflects on the week in combat sports. 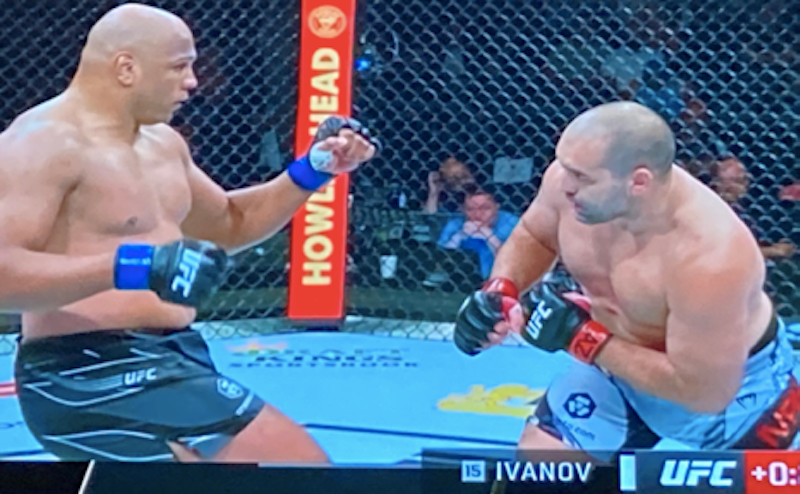 You have to watch the fights, such as they are, for as long as you can. There’s really no other way to go, at least not for me. I’ve grown old next to the fights, with every other piece of the popular culture except bloodbath manga and anime content falling to the wayside.

For anyone watching the fights, there’s something that’ll catch your eye. Are you concerned with the performance, with the “bodies in spaces” (the ring, the octagon), the blood, the proposition bets you placed, the narrative—however threadbare it might be, “let’s fight” met by “them’s fighting words”—animating the conflict? As for me, I want to see people beat on each other in the hope of attaining some trifling glory, because nothing’s more honest than that.

With the exception of the absolute diehards, purists, and old fighting heads, I’ve watched as much of this content as anyone alive, which qualifies me to fire off hot takes about it. Admittedly, the final measure of any fight or powerlift or race is in the outcome, and these outcomes aren't up to me. What follows, then, aren’t detailed summaries of specific fights, but rather sketches of how I experienced them—the truth of the fight to me, “as a spectator,” the face in the virtual crowd.

Blagoy Ivanov defeats Marcos Rogerio de Lima by unanimous decision, UFC 274: This was the only fight I truly cared about last week, and that was because it was a heavyweight fight. Regardless of the martial art in which they’re contested, heavyweight fights are the true fights, the fights where people are knocked out or bowled over, the fights in which even the sloppiest brawler has a puncher’s chance and even the fattest wrestler has a layer-and-prayer’s chance.

Here, we had Blagoy Ivanov—a 5’11” Bulgarian tank of a human, with a deep scar from a stab wound on his stomach and a chin that Derrick “the Black Beast” Lewis called the most impressive he’d ever struck—going against the resurgent de Lima, whose decision to gain a spare tire of flab around his formerly svelte waist hadn’t diminished his hand speed, resulting in a flash kayo of “Big” Ben Rothwell in his previous tilt (the hulking Rothwell hasn’t been interesting since he discontinued use of the steroids that enabled him to choke out the likes of Josh Barnett from a standing position).

Ivanov’s fights aren’t particularly fun to watch for most casuals, but for connoisseurs of damage absorption they’re fascinating. Perhaps the Bulgarian’s chin will go one day, though he spars with Francis Ngannou and the chin’s still in place. Nor did it desert Ivanov in this bout, with de Lima hitting him square on the button several times, only to see these strikes eaten like a bag of White Castle sliders. Ivanov landed the less powerful but more compelling shots, rattling de Lima in rounds two and three before resorting to his usual strategy of leaning against his opponent on the cage, controlling him as he waited out the inevitable decision. Some go well for the former World Series of Fighting champion—he probably didn’t deserve that win against the aforementioned Rothwell, who was surprisingly game for their fight—and others don’t, like his undeserving losses to Augusto Sakai (which should’ve been a win against a sloppy fighter fully exposed by later opponents) and Derrick Lewis (most likely a draw, all things considered equally). This wound up the former, though Ivanov deserved the win and will survive in the UFC to fight another half-dozen or so plodding decisions.

Oddly enough, the fight that put Ivanov on my radar was a brutal first-round knockout of Shawn Jordan at World Series of Fighting 35 in 2017—an absolute pasting of a quality opponent, a fantastic if declining former college football player whose ham-hock fists had “out-colded” the likes of Derrick Lewis and middleweight contender Jared Cannonier without Jordan breaking much of a sweat. What put Ivanov on the MMA radar was his surprising combat sambo defeat of combat sambo GOAT Fedor Emelianenko in 2008—although this too, when viewed in retrospect via YouTube, seems nothing more than a workmanlike victory against a stellar athlete entering his decline phase.

Genah Fabian defeats Julia Budd by unanimous decision, PFL 3: Budd, a massively-muscled former Bellator champion known primarily for her cage-clinching snoozefests, won even in defeat when pro kickboxer and PFL veteran Genah Fabian weighed in for their 155-pound fight at 161 pounds. Fabian, who stymied Budd’s grappling and beat her up a bit, got the official “W” for the record books, but Budd received her three PFL tournament points for more or less lying there over the course of the final two rounds. Not a bad deal, especially considering the nature of Fabian’s weight miss.

The PFL’s 155-pound women’s weight class, the company’s only offering for women, represents a domestic anomaly when compared to the UFC, which emphasizes its 115, 125, and 135-pound divisions, and Bellator, which has focused its 145-pound division over which Budd once reigned on the mostly unbeatable (to all save Amanda Nunes!) Cris Cyborg and erstwhile Amanda Nunes conqueror Cat Zingano (now sans breast implants and resurgent in the cage, at least when booked against inferior competition).

You don’t often see weight misses at this higher weight class—though you see them happening all the time for women everywhere else, as a once-jiggly Mackenzie Dern who weighed in at 123 pounds for a 115-pound fight can attest. For Fabian, who at 6’ is an inch shorter than my wife and four inches taller than Budd, there are any number of reasons why that miss could’ve occurred, most of which can be classified under the umbrella of “women’s issues” and needn’t be discussed here.

What needs to be discussed, at least in passing, is how bizarre the idea of making weight 24 hours before a fight actually is. Scale shenanigans recently cost Charles Oliveira the UFC lightweight title, because at 155.5 pounds how could this man in good conscience defend the belt for a 155-pound division in which one can actually weigh in at 156 for all non-title bouts? Such thinking is “nonsense on stilts,” as Jeremy Bentham said of human rights, and is even more nonsensical when applied to female competitors prone to excessive water retention for a host of reasons that don’t apply to Oliveira, his unfortunate UFC 274 opponent Justin Gaethje, and the many big fat slobs who used to fight in PRIDE’s delightfully shambolic openweight “freak show” fights.

It’s one thing for Oliveira to drop 20 pounds in the week before a fight, but it’s far wilder to contemplate Cris Cyborg losing 26 pounds in a similar period prior to a 145-pound fight. Cyborg’s collapse against Amanda Nunes had as much to do with the exhaustion of bringing her big frame down to size as it did with Nunes’ blows (and Nunes appeared similarly depleted in her own 135-pound title loss to Julianna Peña). And there was the Mackenzie Dern weight miss at 115, with her opponent Amanda Cooper still agreeing to fight the BJJ specialist who now boasted a 7% mass advantage and an admirable spare tire.

The Singapore-based ONE Championship has made a number of decisions I don’t care for—prioritizing ersatz “stars” such as Ben Askren, Demetrious Johnson, and Arjan Bhullar among them—and others that’ve worked out splendidly, like pitting juiced-up, fortysomething Yoshihiro “Sexyama” Akiyama against undersized submission-and-fighting-spirit specialist Shinya Aoki. But in the wake of Yang Jian Bing’s death in 2015 due to dehydration, the promotion moved to a system that involved regular weigh-ins to ensure that fighters were tipping the scales much closer to their natural weight. There are pluses and minuses to this—a notable minus the notable paunches sported by “middleweights” like former two-division champion Aung La Nsang—but for the most part it’s a better system, particularly for women who otherwise might feel compelled to compete outside of their natural weight class, like Mackenzie Dern does in the UFC or Yang Jian Bing was doing prior to her death.

And although I’m clearly a minority voice here, I’d like to see the UFC women’s divisions set at 145, 155, and 170 pounds. I’d start the UFC and Bellator men’s classes at 145 as well, forcing the good 135-pounders to move up—most surely could—and ending the airtime tyranny of all these pillow-fisted slugfests that inevitably go the 20- or 30-minute distance, with 300-plus punches thrown and none of them amounting to a dang thing. I’d do the same for boxing, amateur wrestling, and so forth, but few serious fans would go along with this. “No, we’d lose the beautiful technique, we’d lose the lightning speed, we’d lose the incredible cardio!” To which I can only reply that you won’t ever argue someone into liking a particular glass of beer, and so be it.

It’s not that Budd-Fabian was a particularly hard-hitting affair. In fact, it went like most Budd matches do, with Budd looking many times more jacked than her opponent, throwing some stiff and awkward strikes at them, and then spending the rest of the fight grappling for control. It’s far less compelling than Blagoy Ivanov’s work, because Ivanov’s a world champion when it comes to absorbing punishment and Budd, her heavily armored body aside, has been finished by the likes of Cris Cyborg and could’ve been finished by Genah Fabian, who was considerably bigger and a much more technical striker.

Instead, we were treated to a boring bout, which Budd simultaneously lost (in real life, on her permanent record) and won (per the conditions of the PFL championship series) in as boring a fashion as possible. Fabian’s weight miss ensures she almost certainly won’t be moving on in this year’s PFL regardless of what happens in her next match, and so be it. The 31-year-old’s future remains bright enough—she’s a City Kickboxing trainee with the typical solid wrestling defense and good MMA striking one can expect from Israel Adesanya’s camp.

Boring or no, it was another brief moment of joy for an aficionado of despair like me: two big bodies clashing at night, with nothing at stake except the thrill of a fight that wasn’t the least bit thrilling. Like life itself, I suppose, or at least what’s left of ours.