Do I want any of them to win, or just Trump to lose? 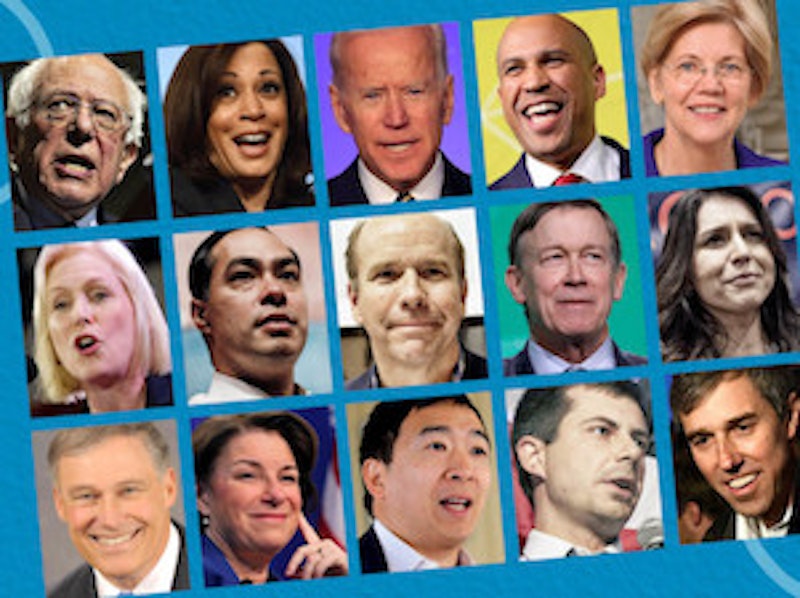 Having ruled out voting for Donald Trump, I now contemplate questions about the Democratic candidates: Do I like any of them? Am I inclined to vote for any of them in the primary? (As an independent in New Jersey, I can join a party as late as primary day.) Will my vote in November 2020 be for a Democrat (as opposed to opting for a third party or not voting), and could such a vote be based on positive reasons rather than just revulsion at the ruled-out alternative?

I come at this from the perspective of a centrist who was a Republican until 2016 and who knows that hopes for a new party that eclipses the GOP are not materializing anytime soon.

I’d add that centrism, for me and I suspect many other centrists, is basically an average; it can include veering to the left or right on various issues, just not fitting into either side overall.

Centrism doesn’t have to be boring, but often is. Most of the candidates currently angling for the centrist space against the Democratic Party’s leftward undertow—frontrunner Joe Biden, Beto O’Rourke, Amy Klobuchar, John Hickenlooper, John Delaney, Michael Bennet—seem interested in conveying that they’re experienced dealmakers and managers who’ll “get things done” without doing anything too extreme. That’s worth something, but not very informative or inspiring.

Two major candidates, Bernie Sanders and Elizabeth Warren, offer promises of moving economic policy sharply to the left. Sanders is a self-described democratic socialist, whereas Warren has said she is “a capitalist to my bones.” To my mind, this is not just a labeling matter but an important distinction, suggesting a basic difference in their readings of history and ambitions for restructuring the economy.

Another group is what I’ll call identity candidates. These are contenders whose appeal lies in substantial part in their personal characteristics and background, including but not limited to affiliation with particular demographic groups. These include Pete Buttigieg, Kamala Harris, Cory Booker and Julián Castro. Buttigieg’s rise from obscurity was aided by the combination of being gay, young, a veteran and a red-state Midwestern mayor. Harris emerged as a major contender by being a forceful personality with skills honed as a prosecutor; and because of a racial and ethnic background that lately has made her the target of a birther smear campaign.

Then there are the theme candidates: ones defined largely by a particular issue, priority or claim to fame. These include: Jay Inslee (climate), Andrew Yang (universal basic income), Kirsten Gillibrand (women’s rights), Tim Ryan (rural America) and Bill de Blasio (New York City). Eric Swalwell might be included in this group, on a theme of generational change; but that leaves open the question of why even a voter receptive to that emphasis would opt for him.

Finally, there are candidates whom I will call outliers, as they’re hard to categorize and/or seem all but certain to be marginal: Tulsi Gabbard, Marianne Williamson and the several candidates who were not included in the recent debates.

In the aftermath of the debates, the editor of this site asked me on Twitter whether I’d vote for Warren (I took this to mean in a general-election matchup against Trump). I replied that I would, and indicated I’d also vote for Williamson against Trump. I quickly retracted the latter point, thinking I ought to give more serious thought to whom I’d really vote for and why.

My more considered opinion, at this point, is that I would vote for almost—but not quite—anyone mentioned in the paragraphs above, against Trump. This is not primarily about policies (though I think the administration’s policies are, overall, quite bad) but rather about trust. I have no confidence in this president’s willingness to uphold the rule of law, safeguard elections or, in the wording of his oath of office, “protect the Constitution of the United States.”

There’s no one among the Democratic names above who would inspire me to vote for Trump. If the Democrats somehow choose one of the outliers—Gabbard and Williamson—to be their nominee, and that person continues to seem as strange as at present, my likely course would be to vote third-party. If the nominee is Sanders or de Blasio, following the reasoning above, I’d be inclined to vote for that person even while expecting his policies to be dismal.

The other Democrats, including Warren, I expect I’d vote for, albeit with some balancing of misgivings and hopes. Whether there are any among them for whom I would feel enthusiasm is a question I can’t yet answer. If I had to choose a candidate at this moment, I’d take Harris, not because of any particular policy stance she’s stated, but because I think the nominee, and the next president, will have to be tough as hell.