The media has chosen to protect Antifa, his tormentors. 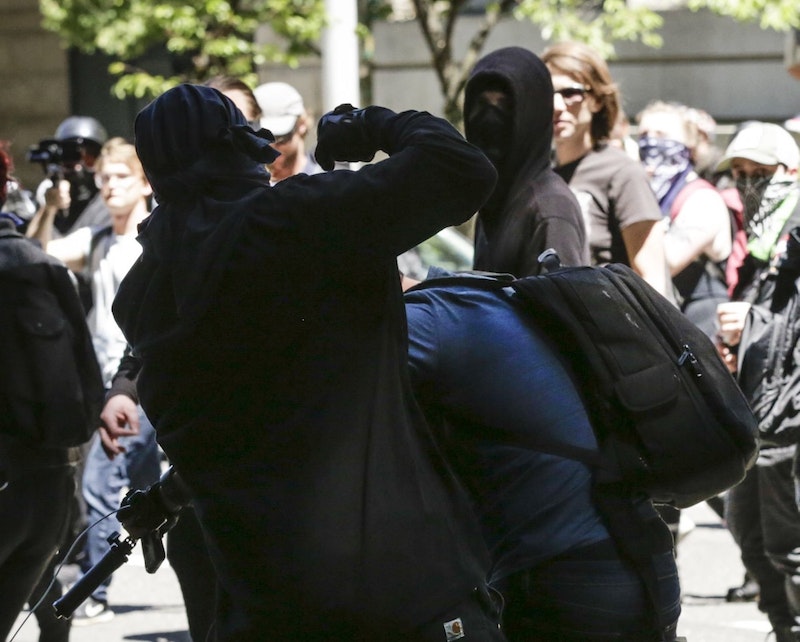 Foot soldiers of the violent "anti-fascist" Antifa beat Quillette editor Andy Ngo, a gay person of color, so badly in Portland on Saturday, as he tried to cover their counterprotest against a Proud Boys demonstration, that he had to spend the night in the hospital with what his attorney said was a "brain bleed." Imagine the resulting media frenzy had the right-wing Proud Boys done that to a double minority. But Ngo's a conservative journalist, which cancels out all his intersectional points. In the MSM's eyes, he might as well be a straight white male who'd goaded some good-hearted, Trump-hating Americans into losing their temper at long last—no story there.

Ngo's bravery in attempting to document Antifa violence is remarkable, although he's mostly unknown because the media won't cover him. Regularly showing up in the middle of a masked, angry mob that hates you and knows your face is real reporting that few of the better-known media figures are willing to do. Saturday's attack had a feeling of inevitability about it, as Antifa operatives have been harassing and using violence against the reporter for months now. They dislike the fact that he reports on their violence by breaking the media blackout.

Media outlets like CNN assure us that Antifa are the good guys because they fight fascism. Of course, they always make sure to say they don't condone violence before they get to the "but." Both Chris Cuomo and Don Lemon have run interference for the violent criminals who've attacked Ngo and other journalists. Pay people enough money, keep them in the bubble and they'll betray even their own profession, which they think of as "noble" and "in danger," without even being aware of it. Lemon and Cuomo think of themselves as moral people, but their arguments are morally indefensible.

There are dual ironies at play here. CNN people are concerned that Trump's anti-media rhetoric could put their bodies at risk, but the network won't even cover the one journalist whose body's getting struck and eyes pepper-sprayed, and it's not because of Trump calling the media "the enemy of the people." Also, Lemon and Cuomo consider themselves "real" journalists as they lead their posh NYC lives and work far away from any danger in comfortable studios, but they don't respect Ngo, who's putting his body on the line for his job, all alone against a vicious mob. This is the thinking of prima donnas.

Lemon, not a deep thinker, demonstrated an appalling level of naiveté with this statement in defense of Antifa: "It says it right in the name: Antifa. Anti-fascism." That's right, and the Nazis called themselves the National Socialist Party because their politics resembled those of Bernie Sanders, and the MAGA people just want to make the country great for all Americans once more. It's all in the name!

The Portland police won't defend Ngo either, even though they know he's got a target on his back. In an appearance on Tucker Carlson's program, he talked about another Portland incident where Antifa soldiers were punching him and targeting his camera equipment. When he asked the police to intervene, they told him that it could incite the crowd, but that he could file a police report. The surly crowd must be real happy to hear such weasel words coming from the government agency charged with keeping citizens safe. Maybe, however, crowds that are beating people up need some fire hoses turned on them.

LGBT organizations do a lot of talking about keeping those under their rainbow safe, but this only applies if you have the correct politics. That's an unwritten rule, because it doesn't sound too inclusive. They could at least be honest and make such a disclaimer publicly. Then they wouldn't have to nervously wait for an incident during Pride Month in which straight white males are beating on a 5’5” gay man to blow over, hoping nobody calls them out for their hypocrisy. If Anderson Cooper or Lemon ever had as much as fingers pointed at them in such a situation, the Pride people would be having fits.

Charlie Warzel, writer-at-large for The New York Times opinion desk, summed up the Left's callous feelings about Andy Ngo on Twitter: “A number of people who go to these protests are looking for fights or to document them. They're all livestreaming. When tensions boil over, it's meant to be ammunition for a culture war." Tensions boil over? A journalist was trying to cover a public event, not saying a word.

Take a look at the video of Antifa attacking Ngo and ask yourself if anyone would invite that, and then ask what kind of journalist would say he invited it. Watching masked people still pursuing the reporter after he was already smacked around and milkshaked about five times was depressing, just like thinking about Charlie Warzel is. Imagine someone from the Times rationalizing a vicious attack on one of its own reporters who’d fallen into disfavor among Antifa.

What Warzel and many other progressives are doing with this situation is victim blaming, which is something they claim to hate. If you so much as suggest that college girls not drink six shots at a frat party, you're victim blaming, as in, “She dressed provocatively, so she had it coming.” So Andy Ngo had his sexy skirt on in the wrong part of town and he paid the price? That's the liberal consensus. Their partisan fervor’s robbed them of the self-recognition needed to grasp how phony this makes them sound.

This story's a reminder that there are so many ways people can find to justify violence against someone they don't like. Charlie Warzel presumably didn't know it at the time, which doesn't even matter, but the Portland police yesterday announced that some of the protestors were tossing milkshakes laced with quick-dry cement—a very toxic substance—one of which may have hit Ngo.

Lemon has said, of Antifa, "No organization is perfect." Let's see how (or if?) he and the rest of the media reports this serious crime against a journalist. A brain hemorrhage is no joke. The media complacency towards Antifa has helped produce a situation where hooded hoodlums are allowed to roam free in an American city wielding potentially lethal milkshakes. Maybe the time’s come for them to put aside their Trump obsession for a moment and address this issue honestly, but that's likely too much to hope for.