Swap out the hateful grifter with the grifter of love. 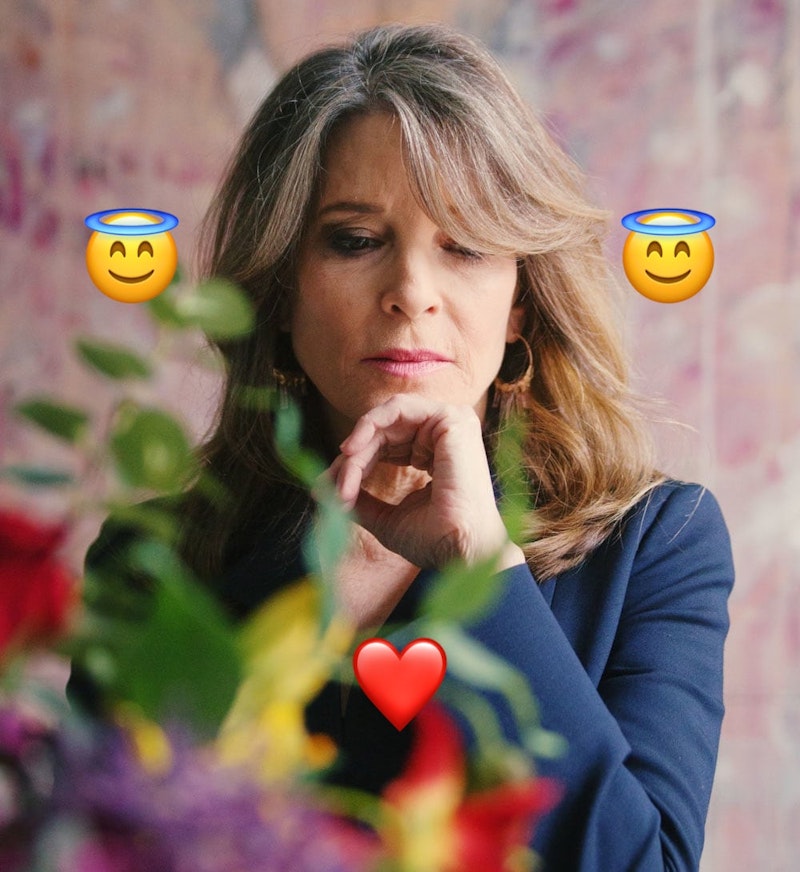 Before last Thursday, I refused to engage with any Marianne Williamson content. I’d heard her name floated as a joke candidate and couldn’t be bothered. She was interviewed on Chapo Trap House before her debate appearance. I didn’t listen—I know they’re for Bernie (or Warren, if it comes to that), and getting some snake oil salesman on the show to gawk and laugh at didn’t interest me. Of course, after the debate, I checked it out. Williamson was by far the most Googled candidate on Thursday night, and I saw tweets like this that looked promising: “Marianne Williamson has already reached legendary also-ran status. Reparations. Spiritual Energy. Inexplicable 1940s Mid-Atlantic Accent. An icon.” That’s from Osita Nwanevu, who also said that Williamson is “a Faye Dunaway character.” Not far off, but still not the full picture.

I’ve listened to her Chapo interview three times now. The first was on Friday morning when I put it on in the background at work. I wasn’t paying attention until she said the phrase “the kaleidoscope of truth.” “You have people talking recklessly about going to war with Iran. You’d have to be insane to talk recklessly about war with Iran.” Now I’m concentrating. “I’m not sure who influenced me more, Bobby Kennedy or John Lennon.” God, where do I sign up? This is my candidate. Someone may have set her closing remarks from the debate to the Twin Peaks theme, and even if her promise to “meet [Trump] on the battlefield of love” sounds as fantastical and melodramatic as Audrey slow-dancing in the Roadhouse or Norma and Big Ed kissing to Otis Redding, I believe in it. “Love will win.” Yes!

She talks about Gandhi, “the politics of love,” and spirituality. Drawbacks? She’s said that overweight people “lack spiritual intelligence,” and she’s an anti-vaxxer. Obesity is certainly a public health issue, but so are the anti-vaxxers, even if I understand frustration from parents who are compelled to vaccinate their kids with a grab bag of chemicals and ingredients that may or may not work. Unfortunately, opting out isn’t smart, otherwise you end up with measles outbreaks. Like people who want to abolish the Second Amendment, I understand the sentiment but you have to realize the cat is out of the bag—these guns, and these vaccines, already exist. Abolition isn’t possible unless you’re willing to risk catastrophe.

I’m not going to read Williamson’s books, but if she comes to Baltimore, I’ll go to see her speak. Maybe I’ll donate to her campaign if she’s still around in January. I hope she is. Trump destroyed every notion of electability and qualifications in a presidential candidate. His presidency has also showed how strong our separation of powers remains. There are levels above the American president, primarily the military. Trump can’t just push the button. He’s farmed out nearly every responsibility to others in his administration, sticking to what he does best: showmanship, theater, and symbolic gestures. But he’s unbelievably stupid, hateful and lazy; this can’t go on. We have concentration camps, the military and people in the administration itching for war with Iran (luckily, Trump can’t be bothered and remains anti-interventionist—for now). Why can’t we get someone that’s equally as shallow but is all about love and peace and The Beatles?

Williamson can fill her cabinet with leftists, liberals, centrists, whatever. Maybe even some Republicans that are prepared to enter an era of the politics of love. I don’t intend on investigating Williamson’s “record” (as what? A self-help guru? Oprah’s friend? I just don’t give a shit). I take her at face value, just like Trump supporters blindly follow him. At least I know, in my blind devotion, I’m willfully deluding myself with a woman that sells love and semi-psychedelic messaging. She’s anti-war, she believes “a holistic capitalism” can exist (it’s true), and instead of calling people names, she prays for them.

Unlike Chapo and their fans, I’m not being ironic. I’m genuinely won over by this woman and will vote for her in the primary and write her in on my ballot in November 2020. If that makes me an idiot in your eyes, so be it. I’ll be praying for you.