Busing Isn't What Liberals Think It Was

Kamala Harris' ambush of Joe Biden was a self-serving stunt. 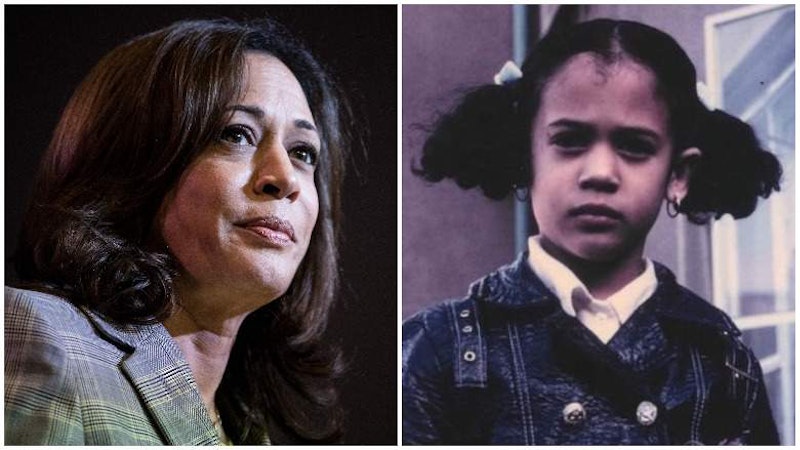 Kamala Harris, in a premeditated sucker punch crafted to look spontaneous, told Joe Biden during Thursday's Democratic Party debate that she was hurt that he'd once worked with two segregationist senators to oppose busing because she'd been bused in California as a young girl to integrate her class. An easy win for California senator over a septuagenarian propped up to rid us of our Great Scourge.

School desegregation's hardly even a topic these days, but it was a staple of the nightly news broadcasts in the 1970s. The busing controversy raged so long ago that few who weren't around at the time understand the issue. Progressives' simplistic default position is that it was a good idea derailed by racists. Some Democratic candidates recently decided that portraying Biden as a racist earns them political capital, so attacking his stance against federally-mandated busing back then is a way to advance that narrative, because who but a racist would oppose school desegregation, right?

But it’s more complex than that. You can simultaneously oppose both segregated schools and the federal government mandating busing just as you can be against both crack use and excessive sentences for users. Contrary to what Kamala Harris believes (or says she believes, because it's rarely clear), opposing busing isn't the equivalent of opposing the Civil Rights Act of 1964. Plenty of black people were against busing in the 1970s, but you'd have been hard-pressed to find even one of them who didn't think they had the right to sit at a lunch counter alongside whites.

American schools were legally desegregated in 1954 by the Brown v. Board of Education Supreme Court decision that overruled Plessy v. Ferguson from 1896 that determined "separate but equal" was constitutional. But neighborhoods still remained segregated, so the status quo barely budged. Busing students, often long distances, was seen as the main policy remedy to put the 1954 court ruling into practice, triggering one of the most divisive educational controversies in this nation's history.

In 1974, anti-busing marches were common. There were sit-ins at schools and government buildings, and a march on Washington, D.C. In 1976, a white teenager assaulted a black man—civil rights activist Ted Landsmark—with a flagpole at a Boston anti-busing protest. In retaliation, two weeks later black teenagers in Roxbury dragged a white man out of his car and put him in a coma by crushing his skull with stones. When police arrived, a crowd of 100 was chanting, "Let him die."

One thing Harris didn't mention about busing is that, even though it may have worked out well for her in ultra-liberal Berkeley, black students shouldered much of desegregation’s burden in the 1970s. Some were transported an hour away to hostile suburban neighborhoods, and it didn't take parents long to think it wasn't worth it. A 1972 Gallup poll showed that 47 percent of blacks were against busing. You could call it a well-intentioned policy that failed to understand that the government, despite its tremendous power, cannot regulate people's attitudes. It was a failure born of equal parts arrogance and naiveté.

James Baldwin knew the score. He said, "There is no place in the movement for the white liberal. He is our affliction." Black people didn't fight to be bused like they fought to end Jim Crow. It was well-meaning white liberals, not moderates like Joe Biden, who did that, and they didn't anticipate that it would spark "white flight" to the suburbs and an increased enrollment among white students in charter and private schools.

Biden seemed unprepared for a line of attack that was inevitable. He told Harris that her own busing was fine with him because it was done locally and that he only opposed federally-mandated busing. She responded that only the federal government had the muscle to enforce it, and then drew a false comparison between busing and the Civil Rights Act of 1964, which Americans generally welcomed. The Prohibition era demonstrated long ago the limits of government intervention, of which Harris is a major fan. As the San Francisco D.A., she once threatened a homeless woman with jail time if her child continued to be truant, an action she would then speak about with pride.

What Harris did to the doddering Biden was tactically sound, albeit shameless. She identified and jumped on a perceived soft spot for a candidate who's been singled out for targeting now that he's been decoupled from his best friend, Barack Obama. In a crowded field, she found a cheap and easy way to stand out by staging a piece of theater in which she manufactured an emotion with the skill of a method actor.

The cynical Senator knew she'd score with this one, especially after making it personal. What white liberal couldn’t be touched by the story of a powerful white male who tried to stifle the education of a young black girl by collaborating with a bunch of redneck senators? That's enough to erase from their memory Biden's long record of standing up for civil rights and the fact that the first black president chose him as vice president. Obama's memory's fading fast in this Democratic Party.

The real story's that the former VP pushed back against a misguided policy that ended up accomplishing little more than dividing Americans, but the media doesn't like that story. Biden was picking up some steam as he replied to Harris' calculated broadside, but noticing he was out of time he meekly ceded the floor. "My time is up. I'm sorry" was his unfortunate choice of words.

Any suggestion that you're a racist is the kiss of death among this group of candidates. You need to come back with force after a trench fighter like Harris shivs you like that. You demand extra time to defend your reputation from a false attack. But Biden couldn't summon up the will. That doesn't bode well for him, but if he's able to hang on and win the nomination, maybe Harris will get the VP spot, because she's made herself into the person who can wash away his sins now.