Strange Times in the Multiverse

Coming to grips with a mysterious reality. 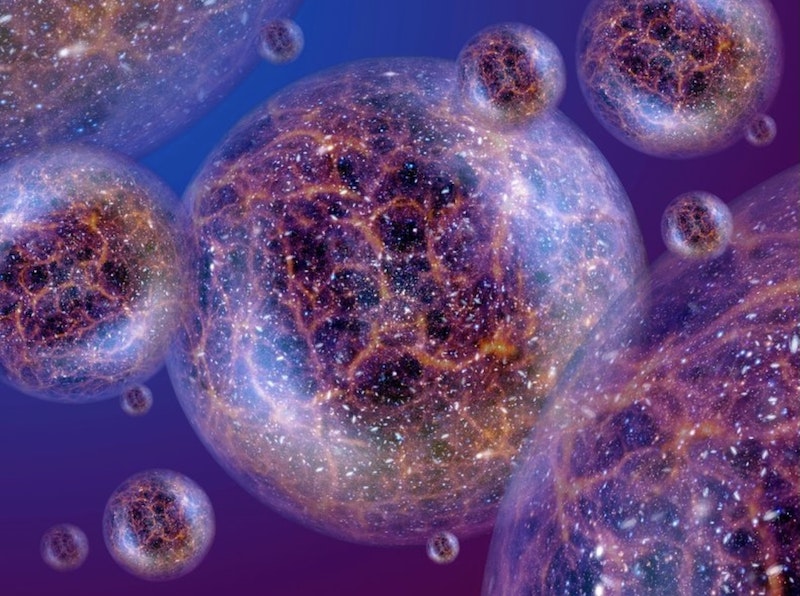 In my high school years, in the early-1980s, I suffered a prolonged bout of existential angst. It probably began on the terrace of our Queens apartment. Looming beyond the Manhattan skyline was the sun, and struck by its enormousness, I felt lost in the vastness of space. Within days, I felt the same way about time, in which I was but an imperceptible blip among the eons.

Then I got to worrying about free will or its absence, a subject piqued by a conversation over pizza followed by a walk through heavy snow, in which I despaired that my actions were just as determined by physical law as the trajectories of the falling snowflakes. On subsequent visits to the library, I read the Encyclopedia Americana’s entry on “Free Will and Determinism,” by a philosopher named Donald C. Williams, and reread it repeatedly; decades later, I remember certain phrases verbatim, such as “a twinge of final causation, perhaps.”

I plunged into extracurricular reading on physics and biology, managing to do so without elevating my grades in my high school science classes, which I found boring. A 1980 book called Other Worlds: A Portrait of Nature in Rebellion, by physicist Paul Davies, fascinated me but also stoked my anxieties. This book raised possibilities of multiple universes, of time being an illusion, of physics revealing reality to differ drastically from our everyday perceptions. Free will seemed even less possible in a multiverse (a term not yet in vogue; Davies wrote of “superspace”). Multiple universes seemed to mean that all possibilities played out, inevitably. Perhaps there were innumerable duplicates of me, with uniqueness just another mirage.

Gradually, such fretfulness diminished. By college, I’d developed some perspective that these cosmic things I’d worried about were, by and large, speculative and open to interpretation, though I’d still have moments of poring nervously over some arcane book in NYU’s library. After graduation, being part of the workforce, having an apartment and other practical matters did much to push aside preoccupations about whether physical reality was structured to my liking.

I view these matters more calmly now, including when I’m copyediting the Scientific American opinion pieces of John Horgan, a science writer whose work has long evinced concerns about free will, the mind-body problem, whether the universe will “remember us after we’re gone,” and other conundrums at the intersections of science and philosophy. Horgan had his own existential crisis as a youth, imagining being completely alone in the universe; recently, mathematician Milo Beckman evoked a similar isolation as a way of explaining algebra.

Still, it may be that no one who’s known anxious cosmic contemplation ever puts such ruminations entirely behind them. Watching the first episode of Loki, I was struck by how its themes connected to my youthful preoccupations about one’s status in the universe and whether it’s possible to choose one’s own path. The Norse god of mischief, having given the Avengers the slip, is arrested by the Time Variance Authority, a bizarre bureaucracy that polices the timeline to prevent chaos such as occurred in a long-ago Multiversal War. To his chagrin, Loki finds that his magic powers are inoperable in this detention, and that his life story was apparently dictated by the Time-Keepers, a shadowy trio of reptile-like potentates (one of them, astute viewers noticed, appears to be Kang the Conqueror, a villainous time-traveler familiar from comic books). In addition, Loki learns that there’s another version of himself, seemingly more formidable, on the loose and wreaking temporal havoc.

The multiverse is a concept rich in potential for storytelling. One can't help but wonder about things that might’ve been: the job that didn’t materialize, the woman who changed her mind. When I pass by the reptile area at the American Museum of Natural History, I remember that over 30 years ago I was about to be offered a position there as herpetology assistant, but I backed away at the prospect of handling venomous snakes. Might I have had a career as a snake scientist? My own zoology TV show? Or died from an early snakebite? I’ll never know.

If a real multiverse exists, it may or may not include duplicates of ourselves. Astrophysicist and science writer Ethan Siegel argues such duplication is unlikely, as even a vast proliferation of universes would have difficulty overcoming the stupendous odds against a particular outcome. A lot depends on how the laws of physics governing a multiverse work—leaving aside the question of who, if anyone, might have powers to manipulate such forces.

Recalling my high school angst, I have a certain sympathy for Loki’s situation: finding his convictions of autonomy and uniqueness may be skewed; discovering his life’s been shaped by factors of which he’d had no clue; and looking to become someone better than he’s been.