Hats off to Rod Dreher

The strange, haunted pundit has me beat. 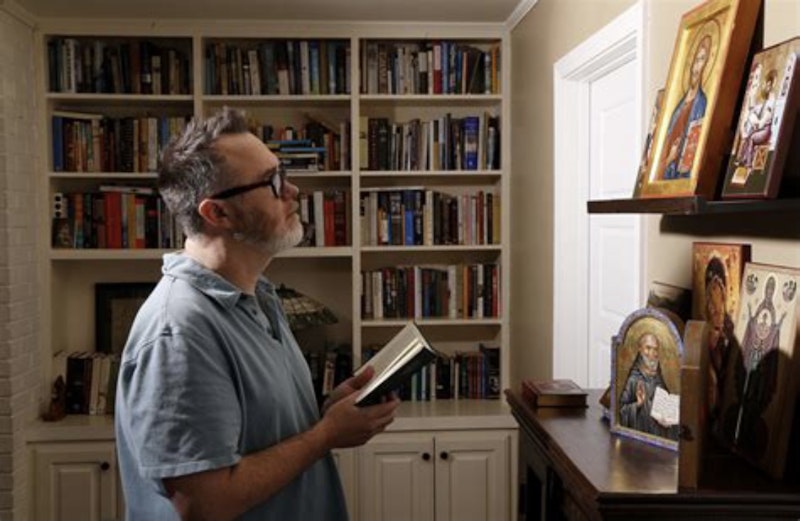 It’s time to throw in the towel as far as my aspirations to being the world’s most magnificent and influential traditionalist-conservative Russian Orthodox far-right reactionary pundit. There was a time when I thought I had a chance to take the laurel. But Christian humility compels me to admit that Rod Dreher keeps beating me like a drum. I’m solidly in second place, but it’s a distant second place, akin to the position the great Aaron Rodgers holds among quarterbacks in the era of Brady.

Sometimes you’ve just got to pause and marvel. Dreher (you can read all about it on his blog) goes off on a long junket to Budapest. While there, he travels to, among other places, Bucharest, on a mission to flog the Romanian version of his latest book, Live Not by Lies: A Handbook for Christian Dissidents. He’s a success in Romania, to the point where he sells an impressive 400 copies of his book at a single church conference. “[T]he book was such a hit that people all over the country were buzzing about it on social media,” he writes. And he’s told: “This book might have started a movement here.”

In other words, Dreher’s book seems to have not only a powerful spiritual and intellectual potential, but additionally a political potential. Dreher and the book’s very pleased Romanian publisher, whose name is Alin Bogdan, bond deeply as brothers in Christ. On the drive to the airport, Dreher mentions a spiritual struggle that he’s been suffering through. Bogdan says in return: “You aren’t the only one in this car who carries this burden.” Dreher is moved; he and Bogdan promise to pray for each other. There must have been, I imagine, a certain amount of moist snuffling when they bid their farewells at the airport, at least on the part of the American.

Within 24 hours, Bogdan drops dead, felled by a heart attack at the age of 43. Blogging through tears about this event like the great spiritual hero that, it pains me to say, he really seems to be, Dreher leaves us, like our incarnated Lord Himself, with a message of love: “We never know what tomorrow will bring. Right now, on this day, make peace with those around you. Tell people you love them. Don’t wait. Cherish every day. The memory of these three days in Bucharest will be with me for the rest of my life, as will the sense that Alin, that dear man, is with me.”

Then Dreher apparently gets over it, pronto, and is back to blogging about the Pink Police State again.

Beautiful. Truly Dreher is a vessel for the workings of grace. The young publisher’s immediate death after Dreher’s departure and the inception of their spiritual brotherhood is a tremendous cosmic fact: as soon as the man absorbed the pure Dreherian doctrine, his continued existence was superfluous; his earthly life was fulfilled; and so, in his ripeness, he was plucked by Our Lord from life’s tree.

There is a word for the role that Dreher is playing here, and it is this: PROPHET.

My feeling is that Rod shouldn’t stop there. Campaign for the sainthood, brother! That’s not as crazy an idea as you might think. Dreher has always given off that cloying scent associated with a desire for radical suffering.

I wouldn’t be surprised to see that at some point, not long after the “soft” liberal totalitarianism of which Dreher warns has yielded to a much harder variety, the new liberal-fascist American regime’s soldiers will wheel him into the arena on a tumbrel. As the humid D.C. sun shines down, and the liberals in the crowd sip their La Croix water and hiss, Dreher will over the course of a good full day be ritually dismembered by the torturer, knuckle by knuckle, chunk by chunk, bit by bit; there may be a good bit of flaying, too. Dreher will meet his horrific passion with a bland beatific smile.

I see already St. Rod’s grinning face shining wanly out from the iconostasis of my little Russian Orthodox church here in Indiana. It will have been painted by a contemporary version of the genius Andrei Rublyov. It will enjoy pride of place in the pantheon of Russian Orthodox saints between St. Basil the Great and Stalin.

Soaked in the blood of your martyrs, your Church cries out to you, Christ our God!

Send down your mercies upon your people! Grant peace to your commonwealth, and to our souls your great compassion!

Glory to the Father and the Son and the Holy Spirit, now and forever and to the ages of ages!