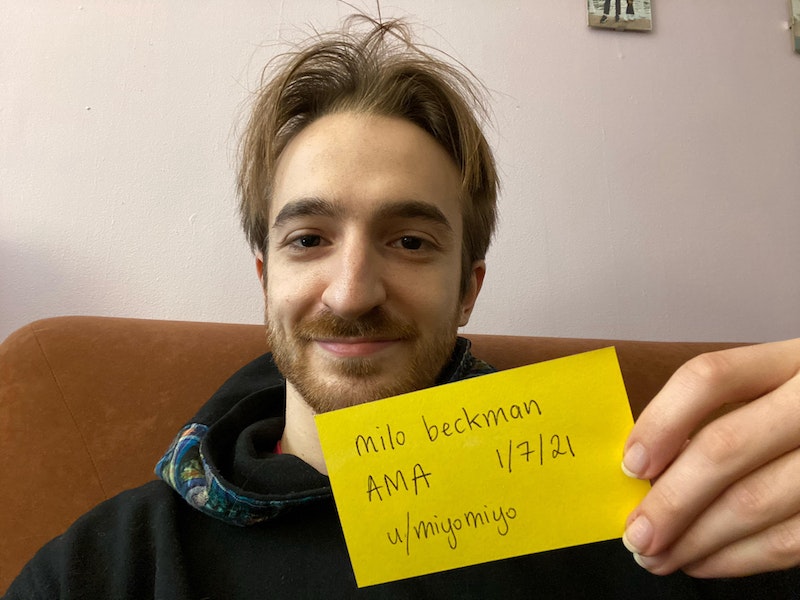 One appeal of math is that it can take your mind off politics. I read Math Without Numbers, by Milo Beckman, during the heated post-election season, and delved into its dimensions, infinities and other abstractions as an alternative to an unpalatable reality. Then again, even arcane questions about the reality and reliability of math can be caught up in political controversy, an intersection this absorbing book touches on as well.

Beckman’s a Brooklyn-based freelance math coach and researcher who grew up as a prodigy, taking high school classes at age eight and entering Harvard at 15. The book eschews numerals and equations, implicitly rebuking perceptions of math as so much calculation. Rather, there’s an emphasis on visual explanation, with illustrations by M Erazo sketching out concepts and sometimes serving in themselves as a concise form of mathematical proof.

The bulk of Math Without Numbers is about three major branches of mathematics: topology, analysis and algebra. Topology, writes Beckman, “is like a looser, trippier version of geometry.” Topology seeks out essentials of structure by treating shapes as stretchable but not cuttable; a mug and a donut thus are both one-holed objects. Shapes that are uniform, lacking special points like edges or self-intersections, are called manifolds, and figuring out their possible types, including in higher dimensions, is a subject of ongoing research. If physicists are correct to model the universe as four-dimensional, topology may help reveal its nature.

Analysis is a field that deals with infinite quantities and continuous change; it’s most familiar to K-12 students in the form of calculus. Beckman fields a common question of whether there’s anything larger than infinity, and he answers affirmatively: “the continuum” is larger than infinity. That’s correct, though another way of putting it is that some infinities are larger than others. An infinity that comes in discrete, countable units is smaller than one in which the items blend together into a continuous or uncountable infinity.

Beckman explains this with a proof that uses a scheme of letters rather than numbers, in keeping with the book title’s vow. Points on a line can be given addresses such as LLRRLLLRL… with each letter marking an increasingly tiny tick to the left or right. One might think an infinite list could capture all such addresses, but it can’t. Swapping Ls and Rs along a diagonal through this vast block of letters, you get an address that’s not on the list. You can repeat this process indefinitely, always finding more addresses that haven’t been listed.

Regarding algebra, Beckman emphasizes it’s far more abstract in higher math than what many encountered in school. It’s not just that numbers have been replaced by letters specifying unknown quantities, but rather that “now we’re working with unknown operations on unknown objects.” Algebraists use the symbol • as a placeholder for these unspecified acts. The goal is to find high-level patterns relevant to broad classes of objects and operations.

Algebra, in Beckman’s depiction, is even further afield from ordinary experience than topology or analysis. He asks the reader to imagine being a disembodied consciousness floating in a void for eons, lacking anything to think about or experience. (A similar idea threads through the writings of science writer John Horgan, whose youthful contemplation of such cosmic isolation generated a lasting preoccupation with topics at the border of science and philosophy.)

Eventually, Beckman proposes, this ethereal mind receives a message that something exists, but no further details are given. This knowledge can be summed up as •g. More eons pass, and a second message comes; something else exists: •h. So far, these revelations mean little. Eventually, the messenger reveals that five things exist, and each has a “partner-thing.” An illustration by Erazo gives us a tiny sampling of the myriad things these sets might be: two hands; five pairs of shoes; five kids on bicycles; five parent-offspring pairs of animals.

Even without knowing what the things are, the floating consciousness can start contemplating questions about them, like whether g being partner to ĝ means that ĝ reciprocates; whether h’s partner could also be ĝ, and so on. Beckman explains that “the big idea behind abstract algebra is that everything we deal with in math is essentially a slightly more complicated version of this basic partner-world.” There are objects, relationships, knowns and unknowns.

Toward the book’s end, Beckman provides a discourse on math’s foundations in the form of a dialogue between two interlocutors, neither identified. One seems to be a well-informed defender of math’s capacity to produce reliable knowledge, the other a perceptive outsider who’s got questions about the authority vested in math. Such questions have taken on a political tinge in recent years, with culture-war skirmishes such as one over an African-American Museum chart, later retracted, linking quantitative thinking to “white culture,” and another breaking out on Twitter over the respective merits of 2 + 2 = 4 and 2 + 2 = 5.

The math defender in Beckman’s dialogue is persuasive, pointing out that multiple societies and cultures have contributed to math’s body of knowledge; that power and discrimination can shape who gets to do math and how they work, but not what’s mathematically true; and that the math profession has shown willingness to accept unwelcome findings, as in the early-20th century when logician Kurt Gödel proved certain limits on what any formal system can prove.

Math Without Numbers closes with thoughts on modeling, simulation and the Standard Model of particle physics. This book’s a cheerful, accessible guide to a forbidding, far-out frontier.