The Orioles are right in the thick of the American League playoff hunt. 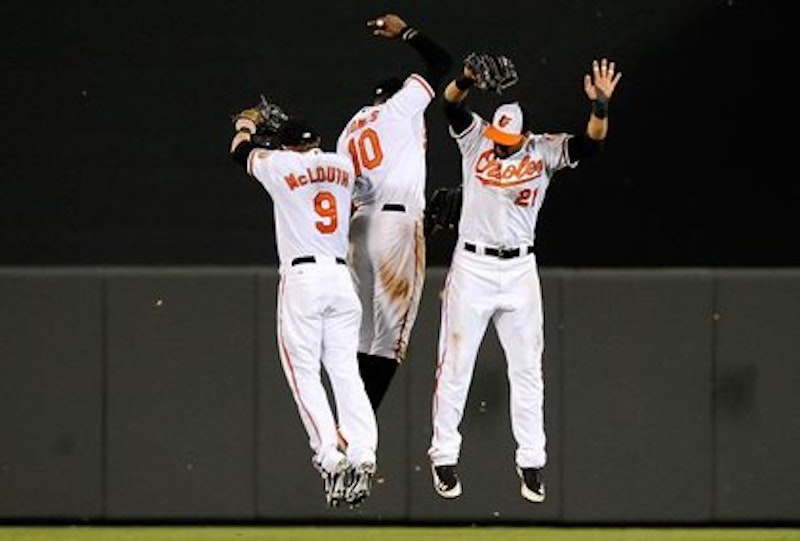 Baltimore sports fans find themselves in an unfamiliar position this month. A typical August is filled with crab feasts, beach trips, and anticipation for the start of the Ravens' season. The Orioles’ surprising run towards the playoffs has sports fans re-prioritizing their viewing habits and wardrobe choices.

The Orioles are right in the thick of the American League playoff hunt. Many people over the past few weeks have attempted to dissect the reasons for Baltimore's newfound success, broadened the usage of the term Pythagorean record, and generally rained on the Orioles' parade. I’ll admit that I didn’t see the O’s being remotely competitive this season. The roster heading into the season looked to be filled with number five starters and designated hitters. I figured anything above 70 wins for the 2012 Orioles would be a gift. The Orioles currently have 67 wins and are just five games behind the Yankees for the top spot in the AL East.

The Orioles' run has been as unlikely as it is unfamiliar. VP Dan Duquette and manager Buck Showalter have adeptly managed the club's 25-man roster. They've essentially created a 29-man roster with a near constant shuffling of players between Baltimore and Norfolk. When the team played without Nick Markakis for a month, journeyman Steve Pearce stepped in to pick up the slack. When Brian Roberts battled back from concussion issues only to re-injure himself a few weeks later the team added little known Omar Quintanilla from the Mets. Quintanilla has delivered big hits over the past few weeks and has become a minor cult hero. When Nolan Reimold succumbed to a neck injury after a hot start the Orioles churned through a bevy of fill-ins before settling on Nate McLouth. The former Pirate and Brave was given up for lost just a few months ago. Now McLouth bats third in the Birds’ lineup. He delivered a big two-run homer in Tuesday's win over Texas.

If the Orioles figured to have any success this season the assumption was that it would come on the backs of young hurlers Jake Arrieta, Brian Matusz, and Zach Britton. The trio of once ballyhooed prospects struggled through injury, inconsistency, and general awfulness. The struggles of the aforementioned trio opened the door for the surprisingly effective Chris Tillman and minor league free agent Miguel Gonzalez. Arrieta and Matusz are currently pitching for Triple-A Norfolk attempting to earn a return trip to the big leagues while Tillman and Gonzalez are the club's second and third starters.

The Orioles are not a great team but they do have some great pieces. Markakis has been superb in the leadoff role since returning from injury. Adam Jones, Matt Wieters, and Chris Davis have emerged as reliable run producers. The promotion of superstar prospect Manny Machado and trade for Quintanilla has greatly improved Baltimore's previously woeful defense. JJ Hardy is playing a tremendous shortstop. Wei-Yin Chen has morphed from Japanese lottery ticket to bulldog. Tillman has gone from top prospect to Major League flop to dependable starter. The emergence of set-up man Pedro Strop and closer Jim Johnson have effectively shortened games to seven innings.

The Orioles are not the team of May or June. The lineup is more balanced and the defense is vastly improved. It's time top stop dissecting the Orioles and questioning their longevity. Put down the calculators, close the spreadsheets, and just enjoy the ride. Fans have waited 14 years for meaningful baseball games and the 2012 Orioles are giving them one every night.