How Are the Orioles Still Competing?

Odds are against it, but an O’s/Nats World Series would be something. 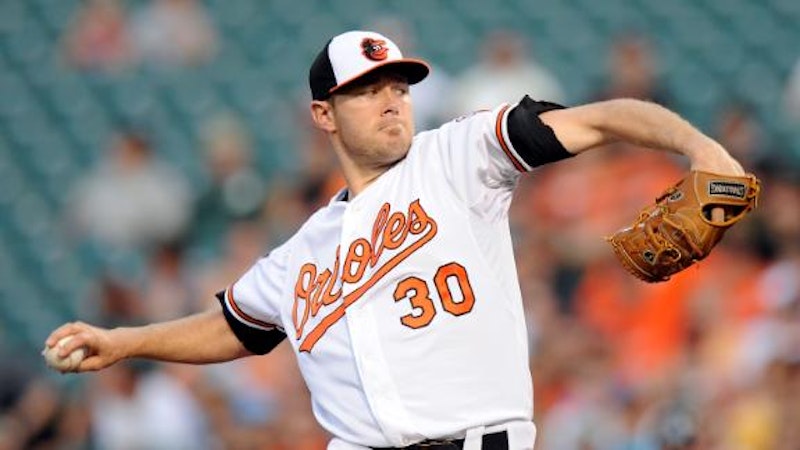 I still don’t think the Orioles will make the playoffs. The team just isn’t that good, and I can’t explain how they’ve won so many games. In all of MLB, the team ranks 17th in pitching according to fWAR, and dead last in hitting. Of all 30 ballclubs, they have the worst offense. How then, is Baltimore 59-51 in the hardest division in baseball? I have no clue.

Adam Jones is the sole superstar on the team, and even he’s loaded with flaws. Wei-Yin Chen, who is currently sporting a 4.04 FIP and 4.34 xFIP, is the de facto ace until Jason Hammel returns from the DL. I guess you could cite the bullpen as the club’s one strength, but even that is a stretch, since it’s barely ranked in the top 10, clocking in at number eight. I’m sure there’s a reason for the Baltimore renaissance. I just don’t know what it is. As opposed to methodically dissecting the Orioles’ success, I’m simply going to enjoy it and hope it continues through October. It probably won’t.

I support the Red Sox, but now I’m just hoping they lose as many games as possible. The Sox are out of the race, and even if some miraculous Rockies-esque turnaround happens, the team won’t advance very far. For now, the best option available is for the Red Sox to pretend they’re the Astros, and lose like the future depends on it, because a high draft pick would really benefit the team’s burgeoning farm system. It’s a weird year for Boston: Jon Lester, who has always been so dependable, is inexplicably awful, yet Josh Beckett is taking all the heat. Beckett has a larger fWAR in fewer innings, with a very respectable 3.56 FIP. The whole golfing incident has been blown out of proportion. He’s being paid to perform, and like it or not, he has. Even stranger, the club is treating Daniel Bard like Rosemary Kennedy, not uttering a word about the reliever/starter/reliever since his demotion to triple-A Pawtucket. Adrian Gonzalez, meanwhile, has lost all the pop and patience that made his bat so desirable two off-seasons ago. And those are only a handful of the issues the front office needs to address this coming winter.

And that’s why I want the O’s to win. Living in Baltimore, I know first-hand how much a playoff berth would liven up the city. The Orioles haven’t been this good in a very long time, the diehard fans deserve it (however many there are remaining).

What would be even better, and this is a long shot, is a Nationals-Orioles World Series. It would be entirely reminiscent of the New York Subway Series of 2000, except with two underdogs (Washington isn’t exactly an underdog, but it’s still their first year contending for a playoff spot, so they count). The Nationals, who amazingly hold the best record in baseball, would likely destroy the Orioles. In fact, if Baltimore does wind up making the playoffs, it would be a giant shock to see them advance all the way to the Series. They would get chewed alive in October.

Then again, who expected the Cards to win it all last year?