The Complicated Machinations of a Baseball Rain Delay

Should I stay or should I go? 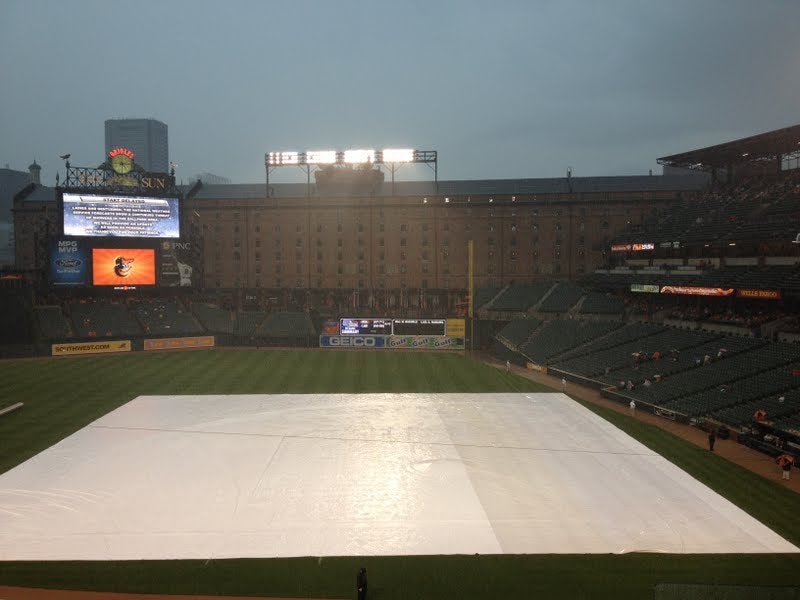 When you arrive at a baseball stadium and, after taking your seats, see that a tarp is covering the field, it’s never an encouraging sign. That’s what happened yesterday at Baltimore’s Camden Yards, where my wife, older son and I had planned to see the still-very-much-in-contention Baltimore Orioles whip the hapless Toronto Blue Jays. Sure, there was an Ike-like downpour at six that morning, and intermittent showers until 11 or so, but when riding down to the park in a cab, the sun was shining and we’d figured the dreaded rain delay was dodged. That, from a short distance, still in the car, we could see the lights were on, was mildly worrisome, but as we walked past the statue of Babe Ruth, entered the facility, and said hello to our friends manning the escalator and club level, it was business as usual. No sprinkles, even, nothing to suggest the game wouldn’t start on time.

After settling in Section 248, exchanging pleasantries with the usher, we saw a tarp over the infield. Fine, I thought, the game will get underway in 15 minutes, but then saw on the Jumbotron an indecipherable weather map—even with 20-20 vision (which I don’t possess), making sense of it was near impossible—accompanied by news that a storm system was in the area and so hold tight, customers, and stay tuned for updates. Although there were patches of blue sky to the south, looking in the other direction revealed a sudden tableau of mean, very dark clouds, and then the rain began.

What to do? You could look at the rotating updates of other games in progress, or watch the mini-screen showing the Tigers/Angels game in Detroit, but at $60 a pop, this was pretty expensive entertainment. Still convinced the game would progress in short order, my wife went on a food run—peanuts and a Coke for me, a disgusting Camden Yards dog for my son—and made small talk with the small contingent of spectators in our section. And then it poured, and poured, and lighting and thunder rocked our outing. I heard a few ushers chatting, one saying, “Hon, we’re in for a long day,” and the three of us killed time by using our iPhones. I’m embarrassed to admit that I checked on Tweets from the Republican Convention in Tampa, as if any of 15,000 media junketeers had anything meaningful to share, save the unsurprising news that former Florida Gov. Charlie Crist had endorsed Obama.

Here’s the tricky part of a rain delay: how long do you wait it out? It’s not like yesteryear, when fields had inadequate drainage systems, and a club’s management can now hold off for hours before announcing a postponement. So, you can do an immediate runner, and hope the game is called and you’ll get a raincheck instead of eating the cost of tickets. Or, like the hearty fans seated at field level, with no cover (our section had an overhang) you can just sit with a huge umbrella, as if that’ll keep you dry after two hours.

By 2:15—the scheduled start was 1:35—the wind was spraying rain everywhere and a neighbor told everyone within earshot that a tornado warning had been issued for Baltimore County, so the three of us figured enough was enough and headed for the exit. Walking out, we felt particularly bad for those people who’d rented out private boxes for an exorbitant cost—and saw a cake, with icing spelling out “Happy 60th Birthday” wheeled into one of them—although that feeling quickly lapsed as we left the park and had to make a mad dash for a taxi stand. Thoroughly soaked, we eventually got a cabbie, texted a photo to my younger son who was away in sunny Southampton with family (he replied with an out-of-sight, out-of-mind, “Bummer”) and got back home, where, luckily the electricity hadn’t conked out.

After a hot shower and change of clothes, I retreated to our sun room, and watched the hapless Red Sox almost blow another game, and then learned that, in fact, at around four p.m., the O’s game was called, meaning we didn’t forfeit $160 after all. The afternoon was shot—we could’ve gone to a movie—and redeeming tickets is a pain in the neck, but I muttered to myself, not even censoring my thought process for the most egregious clichés, “It is what it is.