And then there's really no stopping them. 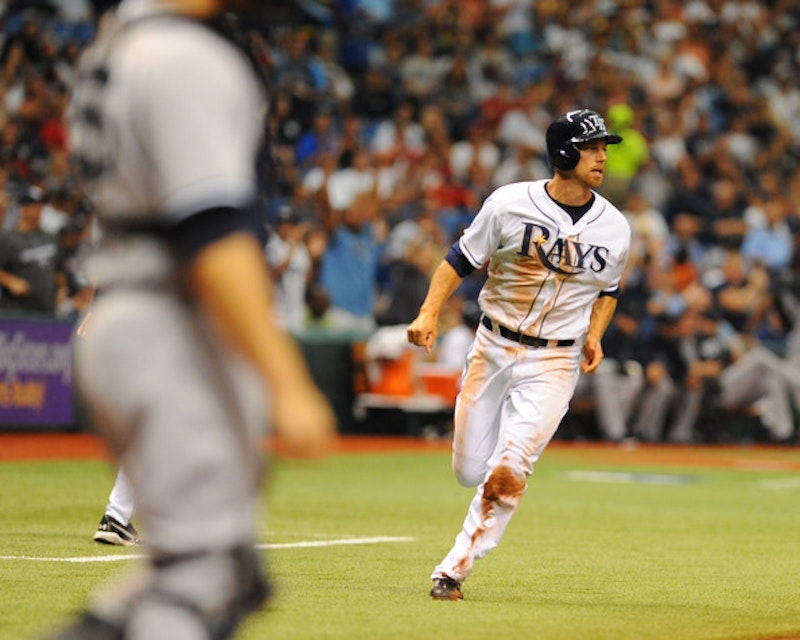 The New York Yankees have held a commanding lead in the American League East for much of the season. The upstart Orioles have remained within striking distance despite their lopsided run differential and ever changing starting rotation. The Tampa Bay Rays hovered around .500 during Evan Longoria's extended stint on the disabled list. Now that Longoria is back in the middle of Tampa's order the Rays are poised to surpass the Yanks.

Tampa has moved to just 2.5 games behind New York in the standings. The Rays have gone 14-3 since Longoria returned from a three-and-a-half month stint on the DL with a bad hamstring. For the season Tampa is 26-11 when Longoria is in the lineup. The Rays are 44-44 without Longoria in the lineup. Tampa's third sacker may be the American League's most indispensable player this side of Mike Trout.

The Rays have always had the pitching to win the division but the lineup lacks consistent threats. BJ Upton continues to be one of baseball's most confounding talents. Tampa gets next to nothing offensively from the middle infield and catcher. Matt Joyce and Ben Zobrist are solid players but they don't strike fear into the hearts of opposing hurlers. Longoria provides the thunder.

The Rays may now be the AL's most dangerous contender. Only the A's and Angels can match Tampa's pitching prowess. The A's make the Rays look like an offensive juggernaut and the Angels can't seem to get out of their own way. The trade for Zack Greinke hasn't provided the jump in the standings that many predicted for the Angels. The Angels' inconsistency and the injuries to New York's pitching staff have opened the door for the Rays.

The Yankees are still waiting for Andy Pettitte to heal from a leg injury. According to recent reports Pettitte is expected to return at some point in September. The 40-year-old posted a 3.22 ERA in nine starts before his injury in late June. New York placed right-hander Ivan Nova on the disabled list yesterday with inflammation in his right rotator cuff. Nova had been brutal lately but the last thing New York needed was another starter on the shelf. The Yankees have been playing without third baseman Alex Rodriguez since late July. Eric Chavez has been slugging like it's 1999 in A-Rod's absence but New York has lost five of the last six games.

As usual, the Yankees will likely enter the postseason, loaded with offense and short on pitching. Only the Texas Rangers have outscored the Yankees this season in the American League. CC Sabathia is a workhorse and Hiroki Kuroda has been outstanding in his first season in New York but the rotation is filled with question marks after the top two. The Yankees will depend on Phil Hughes, Freddy Garcia, and perhaps Nova to make important starts down the stretch and potentially in the postseason. If Pettitte is unable to make a successful return in September the Yankees will be hard pressed to pitch their way to a title.

If the Rays can chase down the Yankees for the division title Joe Maddon will have the chance to set up his rotation. While the Wild Card winners will have to burn their top starters in an attempt to advance to the Divisional Round, the Rays could be laying in wait with a well-rested David Price. Tampa's rotation of Price, James Shields, Jeremy Hellickson, and Matt Moore will be the best collection of starters to take the hill in September, and potentially October. No one wants to see Evan Longoria and his Rays come to town.