Every Team Should Copy the Stable Cardinals 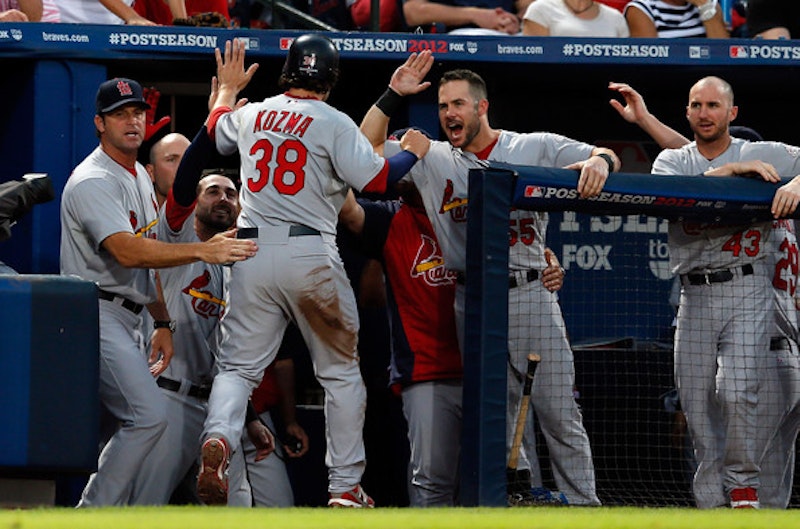 The St. Louis Cardinals made it to the National League Championship series in 2012 despite losing Albert Pujols to free agency, Tony LaRussa to retirement, and Rafael Furcal to injury. Just as they’ve always done, the Cardinals called on internal resources to prop up the Major League product. The Cardinals’ sustainable baseball operations have Theo Epstein and the Cubs jealously copying the blueprint.

When Pujols bolted for the sunshine and quarter billion dollars that awaited him in Southern California the Cardinals turned first to Lance Berkman and then homegrown Allen Craig to replace the slugger. Berkman predictably succumbed to injury but Craig emerged from his super-sub role to become a dependable middle of the order bat. In his first full big league season Craig swatted 22 homers, knocked in 92 run and posted a .876 OPS in 469 at bats for the low, low price of $497,000. By contrast, for the $12 million they paid Pujols last season the Angels got 30 home runs, 105 RBI and a .859 OPS. Advantage Cardinals.

When Furcal went down with an elbow injury last summer the Cardinals again looked internally to find a replacement. Rather than hitting the trade market for someone like Hanley Ramirez, St. Louis turned the shortstop job over the rookie infielder Pete Kozma. The former first round pick hit just .232 for Triple-A Louisville in 2012 but made the most of his Major League opportunity. Kozma posted a .952 OPS and drove in 14 runs in 26 games with the Cardinals. He’s expected to be the regular shortstop in 2013 as Furcal is still out with an injury.

St. Louis even went with an internal candidate to replace future Hall of Fame manager LaRussa. Instead of chasing a big name like Terry Francona or Joe Torre the Cardinals chose to hire former catcher Mike Matheny. The one-time Cardinal and LaRussa understudy picked up where his mentor left off and skillfully led his club back to the postseason.

The Cardinals appear to following the same script this spring. In addition to Kozma starting at short, St. Louis also promoted 2009 first rounder Shelby Miller to their rotation. The 22-year-old Miller is one of the best prospects in baseball and should provide a boost to the back end of Matheny’s rotation. Miller appeared in five games for the Cardinals last season posting two wins and striking out 13 batters in 16 innings.

Kozma could soon be joined in the middle infield by another top prospect. St. Louis selected Kolten Wong out of the University of Hawaii with their first round pick in 2011. Wong may have incumbent second sacker Skip Schumaker looking over his shoulder. The youngster has excelled in his two minor league seasons and could soon be ready for regular big league duty.

The Cardinals’ best prospect is outfielder Oscar Tavares. Tavares, 20, emerged as one of baseball’s best power hitting prospects last season when he slammed 23 home runs, 37 doubles, and posted a .953 OPS for Double-A Springfield. Tavares, who is generally considered among the top three prospects in baseball, is currently hitting .301 with two home runs for St. Louis in Spring Training. Carlos Beltran is likely to begin the season on the disabled list which could open a spot on the opening day roster for Tavares. Even if Tavares doesn’t make the opening day roster St. Louis fans should get a good look at him this summer.