Brian Roberts’ return could be crucial for the Orioles. 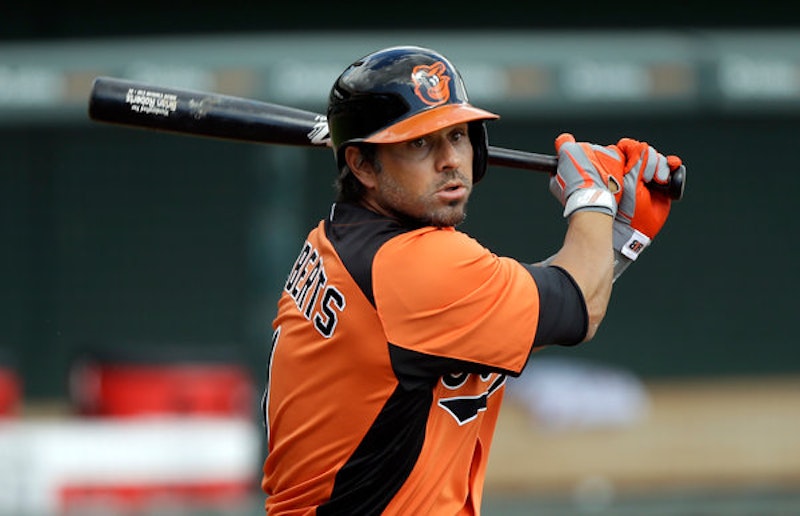 The Baltimore Orioles have paid Brian Roberts $30 million over the past three seasons. In return for their investment the O’s have received a paltry 21 doubles, seven home runs and 39 RBIs. After battling through back and hip injuries, and post-concussion syndrome, Roberts returned to Baltimore’s starting lineup for Tuesday’s season opener against the Tampa Rays. Roberts chipped in two hits and scored a run in the O’s 7-4 win.

The Orioles’ relatively small run differential (+47) and 29-9 record in one-run games last season, not to mention their lazy offseason, has left them open to criticism. While skeptics predict a regression for Buck Showalter’s men the return of a healthy Roberts to the lineup may be more important that any offseason acquisition the O’s could have made. Robert Andino, the Orioles’ regular second baseman in 2012 posted a woeful .588 OPS and accounted for a WAR of 0.2. Roberts is a two-time All-Star who accounted for WARs of 7.3, 3.3, 4.2, 5.2 and 3.0 from 2005-2009. If he can be a fraction of the player the Orioles signed to that four-year $40 million contract prior to the 2010 season Baltimore will have a fighting chance in baseball’s toughest division.

Roberts’ contract has been an albatross for the Orioles over the past three seasons but it isn’t even the worst deal in the American League East, that honor going to Red Sox hurler John Lackey. Boston signed the big right-hander to a five-year $82.5 million contract after the 2009 season. Lackey posted a 5.26 ERA and 1.50 WHIP in 61 starts for the Sox before missing all of 2012 after having Tommy John surgery. The Red Sox have paid Lackey nearly $50 million over the past three seasons and have just 26 wins to show for it.

Boston jettisoned Josh Beckett, Adrian Gonzalez, and Carl Crawford to L.A. last summer but even the Dodgers wouldn’t touch Lackey. He remains as the poster boy for everything that went wrong for the Red Sox over the past few seasons. Lackey will make his 2013 debut this weekend. The expectations of Red Sox fans are undoubtedly low for the recovering pitcher but they’ll need Lackey to finally earn his money if Boston hopes to make a run at the postseason.

The Yankees aging roster is riddled with injuries. As Derek Jeter, A-Rod, Curtis Granderson, and Mark Teixeira rehab their aching bones, Joe Girardi has turned to Brett Gardner. The outfielder played just 16 games in 2012 due to an elbow injury. The Yankees filled in for Gardner in left field last season using a combination of Andruw Jones, Raul Ibanez, duct tape, and prayer. Now that Gardner is healthy he’s been charged with replacing Jeter atop the order and Granderson in center field. Girardi’s Yankees need a healthy and productive Gardner if they hope to tread water until Teixeira, Jeter, and Granderson return.