The Texas Rangers Are In Top Form

The team’s underrated, but they’ll win the A.L. West. 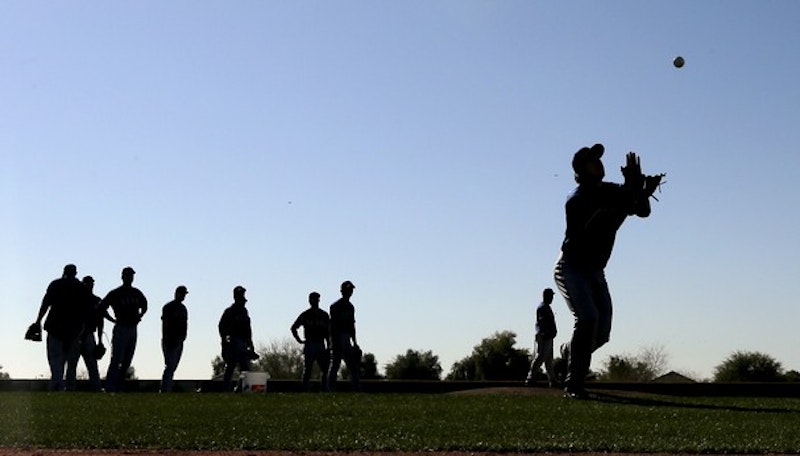 The Texas Rangers might be the best team in baseball; they’re certainly the most well-run. When GM Jon Daniels started rebuilding the team in 2007, he had his current 2013 club in mind: a big market franchise that isn’t too heavily reliant on the free-agent market, a successful major league club that has a robust farm system, and, most importantly, a largely homegrown team. Fans may have been disappointed in Daniels this winter, and some sportswriters have suggested that Texas had one of the worst off seasons, but they’re wrong. Daniels didn’t make any splashy moves because he didn’t need to.

Missing out on Josh Hamilton isn’t a bad thing. Sure, it hurts that the team’s top slugger signed with a division rival, but the Angels will be regretting that contract within a year or two. The same goes for Zack Greinke. Six years from now, it’s hard to imagine the Dodgers looking back on their $147 million investment with pride. Then again, it’s the Dodgers. Either way, Daniels did well in abstaining from major free agent deals this winter. The players he did sign, though, are of note. The young GM signed A.J. Pierzynski and Lance Berkman (who played all of 32 games in 2012), to one-year deals. Pierzynski, who hit a career-high 27 home runs in 2012, will likely remain productive in the small confines of Arlington. If Berkman is healthy, history suggests that he will hit. These two signings, which went under the radar, carry tremendous upside.

But those guys are just supplementary players, pieces that may push them over the edge, not form the core of the team. Though the 2013 club might not be a huge home run threat, the team will produce runs. Adrian Beltre, a main source of offense the past two years, will continue to dominate at the dish—his stellar defense won’t hurt, either. Ian Kinsler, whose power fluctuates from year to year, always produces a high fWAR. David Murphy, forever the best back-up in the game, is finally getting the starting gig, and with free agency looming, the extra motivation for a long-term contract will propel the outfielder to a career season.  Nelson Cruz, a bit of an injury risk, is also on the brink of free agency—he’ll perform. And then there’re the speedsters: Elvis Andrus, Craig Gentry, and Leonys Martin will unsettle opposing pitchers. Does Texas have the best hitters in the game? No. Could they have one of the best offenses in the game? Yes, with their interesting power/speed combination and hitter friendly home ballpark, Texas could get incredible production out of their lineup.

The pitching staff, while not as potent, still has the potential to be deadly. Japanese import Yu Darvish exceeded expectations for his first full season in the majors. The 26-year-old compiled a 5.1 fWAR while completely dominating towards the end of the season. If he can limit the walks (his 4.19 BB/9 number for 2012 was quite high), Darvish could be one of the best pitchers in the majors. Matt Harrison, who was just signed to a five-year/$55 million extension, continues to be underrated by the baseball community. After those two, the rotation includes several high upside talents, including Derek Holland, who looks to bounce back from a disappointing 2012 season.

Daniels has done an excellent job in identifying issues with his team and fixing them. Rangers fans need to trust Daniels—he’s easily one of the best GM’s in baseball, and the franchise will be competitive for a very long time.