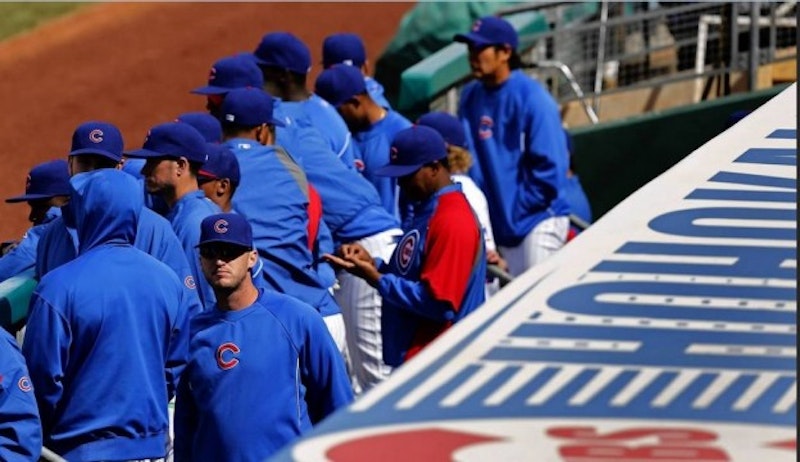 The Chicago Cubs signed Cuban relief pitcher Armando Rivero last week. The signing didn’t make headlines or send the Wrigley Field faithful into fits of joy but it did send signals about the club’s direction.

When Theo Epstein was hired as the Cubs’ President of Baseball Operations in the fall of 2011 he inherited a roster of overpriced aging stars and a farm system short on impact players. Epstein spoke about his desire for a sustainable baseball ops department that could scout, draft and develop the dynamic talent needed to end the Cubs' century-long World Series drought. Rather than throwing dollars at aging stars like his predecessor Jim Hendry, and as Epstein himself did in his final years in Boston, he planned to spend on young players in the International market.

When the new collective bargaining agreement between MLB and the players’ association was announced just weeks after Epstein's hiring, it included a hard cap on each team's International signing bonuses. Epstein’s plan to emulate the Texas Rangers was grounded. Epstein and company couldn't just cruise around the Caribbean with big sack of cash in an effort to stock the ark with Dominican shortstops and Venezuelan sluggers. The Cubbies would be bound to the same bonus pool as the Royals and Pirates.

Epstein and Cubs’ GM Jed Hoyer have done an excellent job of re-stocking Chicago’s minor league system. They got lucky and inherited Javier Baez, drafted in the first round by Hendry in 2011, who looks like a future star. The duo traded for former Red Sox prospect Anthony Rizzo, who should be a fixture at first base on the North Side for years. Former Braves top prospect Arodys Vizcaino and spring sensation Christian Villanueva were added in deadline deals last summer. The Cubs most notable addition over the past year may be Cuban defector Jorge Soler.

The Cubs got the ball rolling on their newfound Cuban connection when they gave left-handed pitcher Gerardo Concepcion a five-year $6 million contract last March. Concepcion had established residency in Mexico and was declared a Major League free agent prior to signing with Chicago. As a Major League free agent his $3 million signing bonus did not count towards the Cubs’ new international bonus pool. The now 21-year-old Concepcion had been Cuba’s Serie Nacional rookie of the year in 2011 when he posted a 3.36 ERA in 101 2/3 innings. Concepcion struggled in his first minor league season in 2012 (7.39 ERA in 12 Class A starts) and projects as a potential back of the rotation starter. Chicago must hope that Concepcion feels more comfortable in his second season and provides a more encouraging performance.

Chicago followed up the Concepcion signing with the signing of Soler to a nine-year $30 million contract in June, 2012. Soler had defected from the Cuban National team and set up residency in Haiti. The 21-year-old outfielder impressed spring training onlookers with his strong throwing arm and light tower power. Soler has already drawn comparisons to former Cub and Hall of Famer Andre Dawson. Soler is expected to begin the 2013 season in Class-A ball but could move quickly. He exhibits excellent plate discipline, evidenced by his .369 on base percentage in 34 games in the Chicago system last season. Soler and Baez have Cubs fans salivating at what could be when the two youngsters join Rizzo and All-Star shortstop Starlin Castro in Wrigley Field.

Epstein’s focus on signing former Cuban professionals has allowed Chicago to effectively do an end-around on MLB’s international signing rules. The addition of Armando Rivero gives the Cubs another power arm to throw into the bullpen mix. The 25-year-old Rivero pitched four professional seasons in Cuba which means that his $3.1 million bonus does not count against the Cubs’ international bonus pool. The 6-foot-3, 180 pound Rivero features a fastball that tops out at 96 mph and a solid splitter according to Baseball America’s Ben Badler. The Cubs’ revamped front office has done a great job of adding impact offensive talent but hasn’t had as much luck on the pitching side. The organization is so short on pitching prospects that they gave Edwin Jackson $52 million over the winter, signed the recovering Scott Baker and Scott Feldman, and imported several experienced Japanese relievers.

Theo Epstein got himself into trouble in his last days in Boston when he strayed from his player development focus and instead spent millions to collect high profile names. He’s taking a different direction in Chicago and hoping that Cuban connection, along with improved drafting and development can return the Cubs to playoff contention.