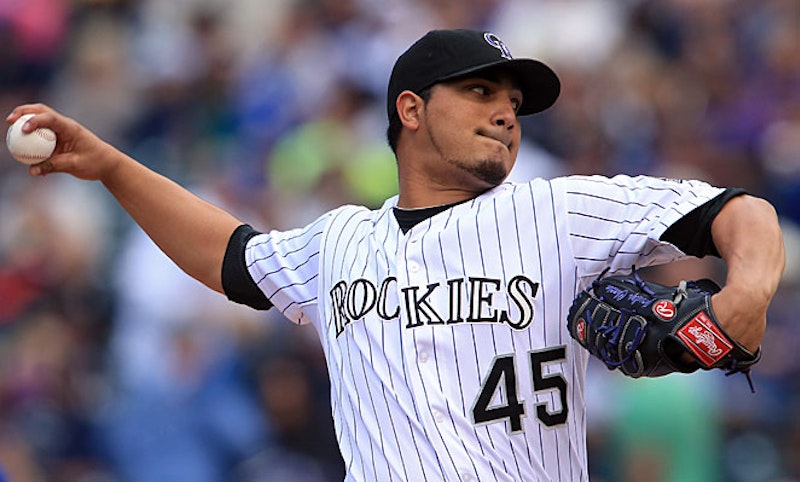 The start of the baseball season is always accompanied by the frenzied shuffling of fantasy rosters as unheralded players get off to fast starts and assumed stars succumb to age, injury, and circumstance. This year is no different as the decline of Phillies’ ace Roy Halladay, injuries to Jered Weaver and Ryan Ludwick, and early season closer changes have sent fantasy baseball owners scrambling to their league’s waiver wire.

After struggling to a 4.48 ERA in 25 starts last year Halladay has Phillies’ fans, and fantasy owners alike, in full freak-out mode. Halladay is 0-2 this season with a hefty 14.73 ERA in two starts. The two-time Cy Young award winner has reportedly lost several MPH on his fastball and already allowed 12 hits, six walks and three home runs in just 7.1 innings. If Halladay is wreaking havoc on your fantasy squad and you missed out on Mets’ phenom Matt Harvey consider picking up Alexi Ogando of the Rangers or the Rockies’ Jhoulys Chacin.

Ogando has bounced between the rotation and bullpen over the past few seasons, but he’s currently a starter and performing at a high level. Ogando moved to 2-0 on the season after allowing just three hits and one run in 5 1/3 innings against the Rays on Tuesday night. The right-hander has averaged 7.6 strikeouts per nine innings in four big league seasons and has a career WHIP of 1.09.

Chacin can be had as a free agent in many leagues dues to his rough 2012 performance. He was hampered by injuries and inconsistency for much of the season but rebounded in Spring Training and claimed the start on Opening Day for Colorado. Despite starting his fifth season of Major League duty Chacin is just 25 years old. He looked like a future ace as recently as the 2010 season when he struck out 138 batters and pitched to a 3.28 ERA in 28 games. Chacin is off to a fast start in 2013 going 1-0 with a 1.35 ERA and 0.90 WHIP in two starts.

Closers are always a volatile proposition in fantasy leagues. As a John Axford owner this season I know this all too well. The Brewers closer has already lost his job after allowing four homers in his first three outings of the season. Axford has been replaced for the time being by Tim Henderson. The 30-year-old Henderson struck out 45 batters in just 30 2/3 innings as a rookie in 2012. He’s worth a flier in deep leagues.

The Cubs’ on again/off again closer Carlos Marmol is off again. Chicago was hoping to pump up the trade value of the inconsistent reliever by giving him another chance to establish himself as the closer. A week into the season Marmol has already been removed from the role and replaced by Japanese import Kyuji Fujikawa, who saved 202 games over the past six seasons for the Hanshin Tigers. Fujikawa is owned in just 60 percent of CBSSports.com leagues but his save opportunities may be limited with the rebuilding Cubs.

If you’re already hurting for positional talent after the injuries to Hanley Ramirez, Brian Roberts, and Ryan Ludwick consider picking up the Cardinals’ Matt Carpenter. After serving as Mike Matheny’s super-utility man last season Carpenter is getting regular time at second base in 2013. The 27-year-old Carpenter hit .293 with 46 RBI in just 296 at bats in 2012 and is eligible at 1B, 2B, 3B and the outfield.