Desperate For a Winner 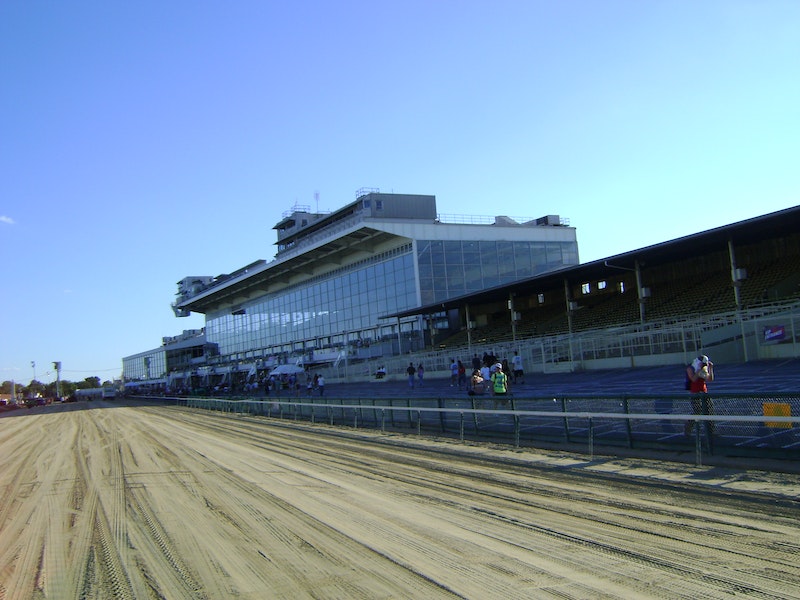 Opening day was a bust, for me anyway. On April 4, Baltimore’s Pimlico racetrack opened for its 2013 season, roughly two months of live racing, with the annual Preakness Stakes by far the top draw. It was a cold overcast day, and I made my way to the track around two p.m., bought a program and a beer and walked out past the paddock to watch the stretch run of the third race. Eighteen-year-old jockey Trevor McCarthy scored his first win of the day, riding Christmas Flys to a five-furlong win at 58:51. McCarthy would go on to win two more races that day, and at some impressive odds too (both Go Allie in the fourth and Granted Ruler in the seventh went off at 6-1). Had I known that McCarthy won four races on opening day at Laurel Park back in September, I could’ve made a nice profit just betting him all day long, but of course, I'm not much of a gambler—which is to say that while I love gambling, I'm really just not that good at it.

If you've never been to a track you'd be amazed by the amount of jargon thrown around. Horse racing is basically fuzzy statistical analysis; trying to figure out which horse will win based on all the horses' past races, plus what you can figure out about their trainers, their jockeys, and the track, and that analysis can be as thorough as you want. There's a vast literature built around pace analysis, pedigree, Beyer figures, track bias, Tomlinson ratings, and on and on. Just learning how to read the Daily Racing Form can take days of really dedicated study, and I'm not at all joking about that. It's intimidating, and as I'm standing around after the third race I hear an older guy on his cell phone complaining about how complicated the DRF is now; "I just want to find my horse and now, it's like, they've just got all this stuff, you know, what medication the horse is on and… shit… it drives me crazy!"

I walk back inside and buy another beer. It's a, not surprisingly, older crowd here on a Thursday afternoon—there's probably some 400 racing fans wandering around and I'm one of about 10 guys under 40. Attendance and betting has been down for years, and without state help there's just no way the tracks would stay open. When Maryland legalized slots in 2007, a percentage of revenue was set aside for racetrack redevelopment, and just last month the Maryland Jockey Club announced plans for $30 million worth of renovations to Pimlico and Laurel, but the 2011 Annual Report from the Maryland Racing Commission puts total attendance at Pimlico, Laurel and Timonium (which runs for about a week during the state fair) at just over 850,000, that's down from more than a million just a few years ago. Horse racing isn't attracting young fans, and with less money to go around, everyone starts looking for an angle: trainers dope their horses, jockeys pull up during rides. Last year, trainer Doug O'Neill was given a 45-day suspension for improper medical procedures, just days before his horse, I'll Have Another, was set to make a Triple Crown bid at the Belmont Stakes. I'll Have Another was later scratched due to severe tendonitis, a "freakish" injury, O'Neill said. After the suspension was announced, the AP reported that, in fact, of the 11 trainers running horses in last year's Belmont Stakes, 10 of them had at least one violation of state medical regulations.

Horse racing can also be really brutal. A 1992 study by Julie Wilson at the University of Minnesota found that a horse has to be put down after an on-track injury in about one out of every 92 races, which is roughly the number of races that go off across the U.S. on any given day. Safety precautions have improved over the last 20 years, but watching a horse break its leg, throw its jockey, kick around helplessly in the dirt until a vet runs over, puts it under a white sheet and injects it with a massive amount of pentobarbital, well, that'll turn just about anyone off from the "majesty" of horse racing.

Back at Pimlico, I've found a nice corner chair in the simulcast room and I'm talking to an older black man named Larry. Some days you go to the track and you just can't find a winner anywhere. You stare at the DRF for 20 minutes comparing fractional times and finally admit to total confusion, and if you're smart, you don't bet at all. That's what Larry's decided, but I'm not as smart as Larry, and over the next couple races I'll lose another $60—most of it on St. John's Gospel, an underlay favorite in the seventh who'll completely fall apart on the stretch run. Never bet an underlay. That's one of the first lessons in Brad Free's Handicapping 101. But I was desperate for a winner, and drunk, and St. John's Gospel looked like a sure thing. Still, horse racing is gambling, and there's no sure thing in gambling. I tossed my empty beer can in the trash. On my way out I passed a man in a wheel chair. He was holding a wicker basket full of tickets, slowly tearing them all up. Some of us never win.