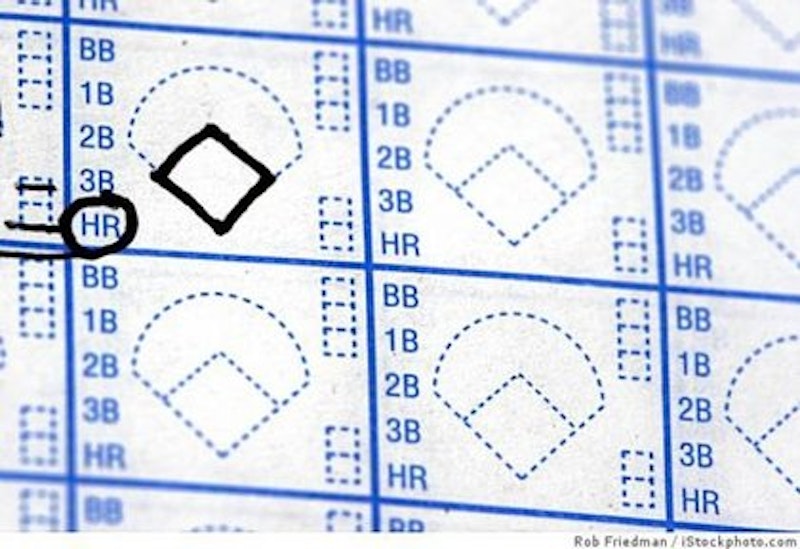 Although I have never played sports, I’m from Philly so I grew up (and still enjoy) watching the Eagles, Phillies and Flyers. I tried playing softball for a year or two and was pretty awful at it. I remember thinking it seemed so slow compared to baseball. So after hanging around at my little brother’s practices, I eventually ended up with the job of keeping score. The scorebook was like a foreign language map at first, but once you got used to it, it was pretty simple. After a few years, I even got a leftover game jersey, basically serving as manager.

In high school, since I had years of experience, I approached the baseball coach and ended up getting the manager job. Loved it. And not just because it was fun to watch the girls get jealous when I climbed onto the travel bus with all their boyfriends. It was higher-level scorekeeping in high school baseball. I kept batting averages, pitching and other stats throughout the season, in addition to a good working knowledge of who looked the best in those pants.

Fast forward from 1987 to the current baseball season of 2013. The only baseball field I’ve been on in the interim was as a minor league mascot and I could’ve never seen a scorebook from the inside of that giant coyote head.

My son’s little league team didn’t appear to have a regular scorekeeper. One time, the coach’s dad did it, one time another dad. So last week I mentioned to the coach that if he needed help, I could pitch in. “As team mom?” he asked. “Oh hell no,” I said. “But if you need someone to keep the scorebook, I’d love to do it.” He looked at me, only a moment of how-would-a-mom-know-how-to-keep-score crossing his face, agreed, and handed me the book.

I set about getting the roster from the other team, filling in player numbers and game details. Ah, it was good to be back. I settled in recording singles (“1B”) and doubles (Also “1B” because the boys only get to second due to errors overthrowing the first baseman). A lifetime ago, we’d record on whose error they got to first. I leave this detail out.

The rules are different for the eight-year-olds being pitched to by a machine. There are still three outs per team in an inning. Each kid gets five strikes because the pitching machine is inconsistent and some of those are definitely balls. After five strikes, in their first at-bat, they get to try to hit off the tee. No tee after second inning. Only five runs can score in an inning, otherwise the scores might reach football score proportions.

Things are going along fine until I realize there’s no batter. “Batter!” calls the coach from the pitching mound, next to the machine. I glance over to the bench. Oops, was I supposed to be keeping track of the boys on deck? I guess I was. So now I’m juggling how many outs/hits/runs/innings are happening on the field plus how many of the eight-year-olds can actually manage changing from hat/glove to batting helmet/bat/lineup position. Jimmy is supposed to be at bat, but he’s sitting on the bench with his glove on, drinking water. And his shoes are untied. And he doesn’t have a batting helmet, so we have to borrow one from the kid furthest away on the lineup. And now he wants to put on batting gloves.

Batting gloves really slow down the system. During the game, I eventually got used to lining the boys up on the bench in their batting order and explaining “on deck” and then RBIs to a kid who was crying because he flied out and I wanted to explain that the run scored because of him. But do eight-year-olds who ask me to remind them “which way you run after you hit the ball again” really need to put on a pair of batting gloves before their at-bat? C’mon, parents, it’s all I can do to get them to stop drawing their name in the dirt with a stick.

And I see the early beginnings of bullying, or at the very least, unsportsmanlike conduct. Unacceptable. One kid calls out “Let’s call this kid Porky” to a bigger boy, another sarcastically says, “Oh, yea, Kevin struck out again. Big surprise!” So now I’m also a guidance counselor, explaining that we only say positive things to our teammates (you little punks, I think). Don’t even get me started on the parents who coach from the bleachers. Remind me to bring extra pencils in case of rage-doodlemarks in the scorebook margins.

The mom from the other team comes over and asks me what “K” means. She’s supposed to keep the scorebook but doesn’t know how. So I teach her.