At least on the tee-ball field. 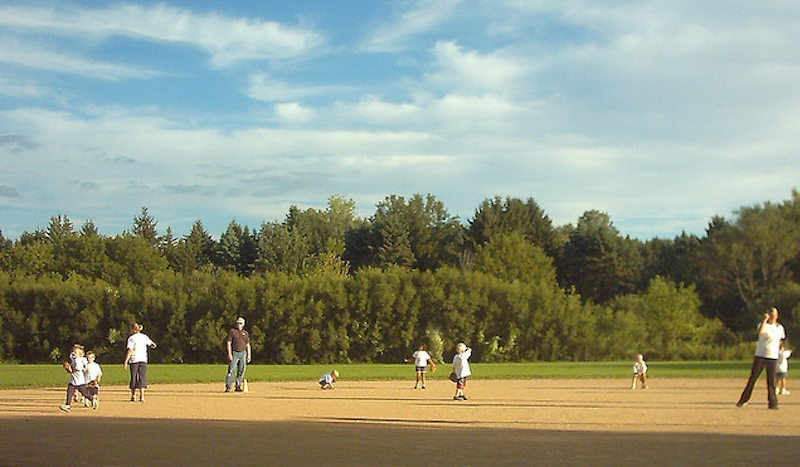 I’m officially a baseball coach. Tee-ball to be exact.

I helped out with my son’s tee-ball squad last year on an unofficial basis. I wasn’t involved in practices and generally tried to keep the bench from degenerating into a scene from Porky’s during games. It was fun to see my little guy having fun and making friends with his teammates, but mostly I was glad I wasn’t the coach.

When January rolled around my son and I headed up to the local township building to register for another season of. On our way into the building we had this exchange:

Dad: Are you excited for tee-ball?

Greyson: I’m excited that you’ll be on the field with me.

Dad: What do you mean?

Greyson: You’re gonna be my coach.

As a decidedly unspectacular Little Leaguer in my day I was taken aback by the notion that someone would welcome the thought of me on a baseball field. I didn’t think my hour commute, full-time job, teaching schedule, and writing commitments would allow me to devote the proper time to coaching a tee-ball team so I volunteered to be a practice coach. Greyson was sufficiently thrilled with that prospect.

My only prior coaching experience came about seven years ago when I worked at a private school in Baltimore and our sixth grade basketball coach had to miss a game. I volunteered to sub in return for a nifty pair of athletic shorts. The coach left me with no set plays and scarce instructions. We boarded a bus headed for the Downtown Athletic Club as I crossed my fingers.

As I led my undersized bunch onto the floor we discovered our tall, confident opponents running organized layup drills and hoisting three pointers with surprising accuracy. I half expected them to finish their warm-ups with some windmill dunks and a few skillfully timed alley-oop passes. The fellas and I were in for a long afternoon. We lost something like 52-13. I called a few timeouts early on to slow down the pace but by the second half I really just wanted the damn thing to end.

That was my last experience with coaching until this past Saturday. There I was in my league issued cap and jersey, hurriedly walking around the bases as my name was announced to a few dozen onlookers as part of the Little League Opening Day festivities. I’m Dan Soderberg and I’m an assistant coach.

As a lifelong Orioles fan and Baltimore native I despise the New York Yankees. I’d rather root for a pandemic than the Yankees. At our first practice our head coach informed the team that we were indeed the Yankees. The kids, most of them wearing Orioles caps, giggled as my head fell into my hands.

Though it’s called tee-ball we generally have the coach throw five or six pitches to each kid hoping to hone their batting skills and avoid the tee. I had the pleasure of pitching to my son on Opening Day. He generally struggles to make contact when pitched to, and since this was the first time I pitched to him outside our backyard, I desperately hoped the little man would connect. On the third pitch he hit a solid grounder right back to me. My instincts told me to glove the ball and toss it to first base, but thankfully the good dad gene kicked in just in time for me to jump out of the way. He beat the throw to first and beamed with pride. He wasn’t the only one. The team wrapped up what sure seemed like a victory, though we don’t keep score, and joined together for a postgame cheer. There I was, a son of Baltimore, boisterously shouting, “Let’s go Yankees!”

After the game I asked Greyson to name his favorite part of the day. I assumed getting a hit off dear old dad would top the list.

He replied, “I liked having you on the field.”