It’s never over for journeymen when the need arises. 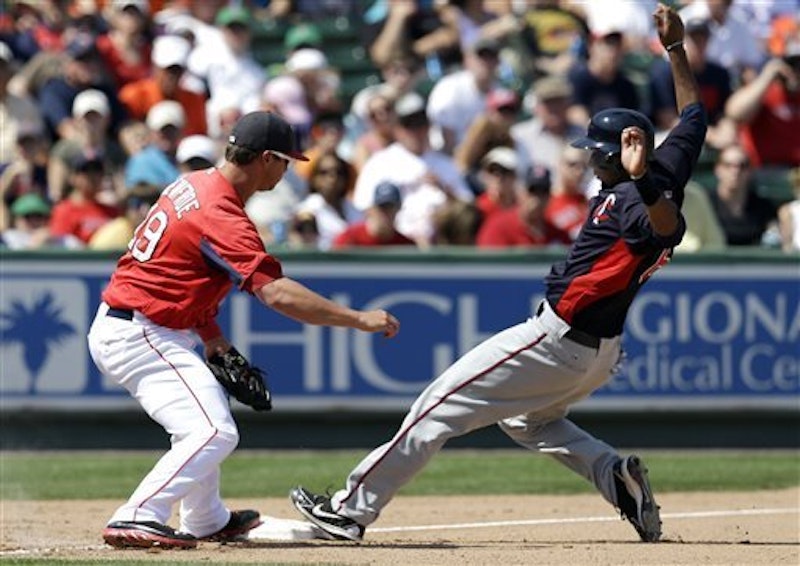 Brian Roberts shocked a lot of people, myself included, when he made the Baltimore Orioles’ Opening Day roster. After battling a menagerie of maladies over the past three seasons Roberts finally appeared to be healthy and ready to contribute—until he was injured again, out at least temporarily, in the O’s win over Tampa Bay yesterday. The Orioles are hoping Roberts will earn some of the $10 million they owe him in the final year of his contract. Roberts’ former keystone partner was an even more shocking sight on an Opening Day roster.

Miguel Tejada, now 38, made the Kansas City Royals’ roster as a utility infielder. The six-time All Star and former MVP is now a bench player charged with backing up Alcides Escobar and Mike Moustakas. Tejada last played in the Major Leagues with the 2011 San Francisco Giants. He was released after hitting just .239 with 26 RBIs in 91 games. Tejada caught on with the Orioles last summer but was released after failing to impress at Triple-A Norfolk. He looked to be finished after collecting five extra base hits in 36 games for the Tides. He surfaced again on the Dominican team that won the World Baseball Classic last month and apparently showed enough to earn a spot with the Royals. Royals Manager Ned Yost apparently thinks Tejada has something left offer; he may be alone in that assessment.

The Minnesota Twins turned some heads over the winter when they dealt Denard Span to the Nationals and Ben Revere to the Phillies within a matter of days. The moves left the Twins with an improved pitching staff but no one to play center field. Aaron Hicks, Minnesota’s first round draft pick in 2008, had a breakout season at Double-A in 2012. He posted career highs in extra base hits (45), steals (32) and posted an impressive on base percentage (.384). Hicks’ hot hitting carried over to Spring Training where the 23-year-old slammed four home runs with a 1.051 OPS in 22 games. Hicks earned his way onto the Twins roster. Rather than sending Hicks to Triple-A to preserve his service time Minnesota rewarded one of their best prospects by making him the Opening Day center fielder.

The Red Sox did the same with one of their best young players. Jackie Bradley Jr. had such a hot spring that he began to take on almost legendary status. The 22-year-old Bradley hit a whopping .419 in Spring Training and earned a spot on the Opening Day roster. Bradley’s inclusion on the roster became a bit of a lightning rod for Bosox fans as some would have preferred for the team to send Bradley to Triple-A to begin the season and preserve his Major League service time. A few weeks in the minors could have meant the difference between Bradley Jr. becoming a free agent after seven years in the big leagues rather than six.
The New York Mets are in full rebuild mode and still stinging from the financial backlash of the Bernie Madoff scandal. New York has some promising young starting pitchers in Jon Niese, Matt Harvey, and the not-quite-ready Zach Wheeler. The Mets also have a piecemeal bullpen featuring two of the biggest Opening Day roster surprises of the season. LaTroy Hawkins was at one time a hot shot Twins prospect. After flaming out as a starter Hawkins was moved to the bullpen and has pitched for 10 Major League teams. The now 40-year-old baseball vagabond is serving as a setup man for the Mets. Hawkins is joined in the New York bullpen by Scott Rice, perhaps the most unlikely member of any 2013 Opening Day roster.

You’ve probably never heard of Scott Rice, unless you’re a Baseball America subscriber or you have a fetish for washed out Orioles’ prospects. Baltimore selected Rice with the 44th overall selection of the June 1999 draft. The Orioles had seven picks in the top 50 selections of that draft. The 1999 draft could’ve been a watershed event in the history of the franchise. Instead of putting the Orioles on the right track the 1999 draft served as exhibit A in the club’s continued failures in scouting and player development. Rice joined fellow 1999 draftees Mike Paradis, Josh Cenate, Keith Reed and Richard Stahl as the poster boys for Baltimore’s ineptitude. Rice pitched for eight seasons in Baltimore’s minor league system reaching as high as Triple-A Ottawa in 2006. He was a decent though unspectacular minor league reliever. After leaving the Orioles organization Rice set out on a baseball journey that put LaTroy Hawkins’ own travels to shame. He logged minor league time for four different Major League organizations and spent three stints in the independent Atlantic League. After 480 appearances over 14 minor league seasons Scott Rice’s persistence paid off when he earned a spot in the bullpen for the 2013 Mets. Rice made his long awaited Major League debut when he struck out two Padres in a scoreless inning in the Mets’ 11-2 victory in Monday’s home opener.
—Follow Dan Soderberg on Twitter @dadstimeout