Would You Could You In a Superhero Comic? 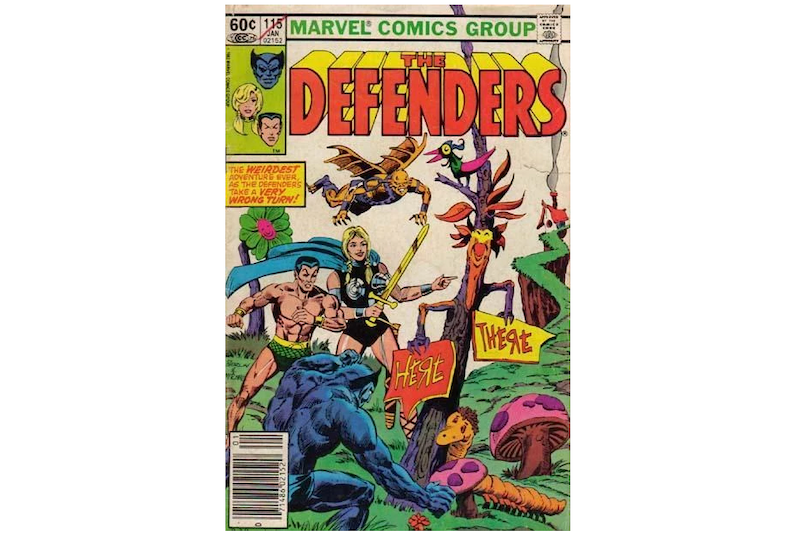 This is the last of a series of posts rereading comics from my childhood. The last one on Shogun Warriors is here.

As a kid, I never exactly understood The Defenders. I didn't read the comic regularly, and when I looked in from time to time, the team members had always shifted radically. It generally included heroes I’d never heard of, like the Gargoyle or Nighthawk, along with some who didn't seem to fit in a team plot, like the insanely egotistical Namor, the got-his-own-mythos to attend to Dr. Strange, and the leave-me-alone-or-I-will-smash-you Hulk. The plots were byzantine and befuddling.

The Defenders #115 is a good example. It's the earliest Defenders comic I own, and it's almost farcically incomprehensible—at the beginning. But writer J. M. DeMatteis shrugs off the weight of his narrative quickly, and turns the Defenders' weirdness in on itself, penning an unexpectedly light-hearted refutation of its genre. The Defenders never made sense as a superhero team, and DeMatteis runs with that.

He runs, bizarrely, to Dr. Seuss. But first he's got to shake the dust of the previous storyline off. The comic starts at the end of a plotline that takes four text-heavy pages to resolve, but still makes no sense. The Defenders had an adventure on an alternate world; the Nighthawk of that world ended up replacing the Nighthawk of our world when the Nighthawk of our world died because part of the collective consciousness of a cosmically powered being was a woman who loved Nighthawk? I don't know. Anyway, folks on the alternate world send the Defenders back to their own world… but a cockroach shorts the dimension hopping machine, and so four of the Defenders—Namor, Valkyrie, Beast, and Gargoyle—get zapped somewhere else.

That somewhere else is a place called "Here"—aka, a loving Theodore Geisel pastiche. Penciller Don Perlin comes into his own working in a Seussian vein. His human anatomy is shaky at best, but he can draw a mean giant mushroom alongside big-eyed fuzzy bulbous Seussian critters and odd-shaped Seussian shoe trees. DeMatteis tosses off the nonsense rhymes with a will. "For your coming was predicted—by the ancient poet, sage and grouch…the all wise Nostrapicted! He knew that some day our fair burg would find itself at war with fiends and finks and flying Ginks!" Perlin draws the Ginks like goofy purple people eaters, dropping giant tomatoes from a height.

An attack with giant tomatoes isn't especially dangerous, and part of what's delightful about the story is the way it resolutely refuses to embrace the superhero stakes. The war between Here and There over who gets to be called Here is presented at first as a real war with a real monster—a giant Seussian fellow with boxer shorts and sharp teeth named Thornton. But when the Defenders actually confront Thornton, he assures them he doesn't want to hurt them; instead he gets them stuck to his gooey skin, and then tells them long and boring stories until they fall asleep. The Defender Namor is a lot more dangerous. He stomps and shouts because he's upset that he's landed in such a silly world, and makes al the Seussian critters burst into tears. "You've scared the little fellas!" Gargoyle chastises him. Shame on you, Namor.

The feuding Seussian critters eventually reconcile with no harm done (unless you count mild spanking of the evil mastermind). Valkyrie is initially skeptical of this mode of warfare, which involves plastic paddles in place of weapons. "Art thou daft?" she asks. But the Beast points out that plastic paddle war has a good bit to say for itself. "It'd sure be nice if the leaders on our world were half as…'daft’."

Beast is talking about military leaders and such. But he could be talking about mainstream superhero comics writers too. Superhero comics resolve almost every conflict with fisticuffs. It's true that people don't go to war with plastic paddles in real life—but people don't generally beat the tar out of each other on first meeting, which is how superheroes often greet each other.

Captain Carrot and His Amazing Zoo Crew was a humor comic, but it still mostly checked the superhero genre boxes—there was a villain, there was a fight, the superheroes saved the day. DeMatteis and Perlin are more adventurous. The Defenders don't just go to a different world; they go to a different genre. The adventure script is torn up; the Seussians save themselves without violence while the heroes snooze, or giggle.

"After all the depressing, mind-blowing trips we've been through these past few months…I'm happy just to be smiling again!" the Beast declares, and he's got a point. The Seuss pastiche isn't just more light-hearted than the superhero comics of its day; it's also just generally weirder and more creative. Namor, king of the oceans shouts, "Be free my heart! Be renewed my spirit!" before leaping into an ocean that he quickly discovers is made of strawberry malted. The Seussians barbecue a giant banana. The comic is just filled with charming and inventive gags.

In theory, Seuss wrote for very young children, and superhero comics are supposed to be for their slightly older siblings. But 40 years on, the Defenders #115 is easily my favorite of the comics I've revisited. Nonsense ages well—in part, perhaps, because, as Beast suggests eschewing violence for imagination isn't so daft after all.